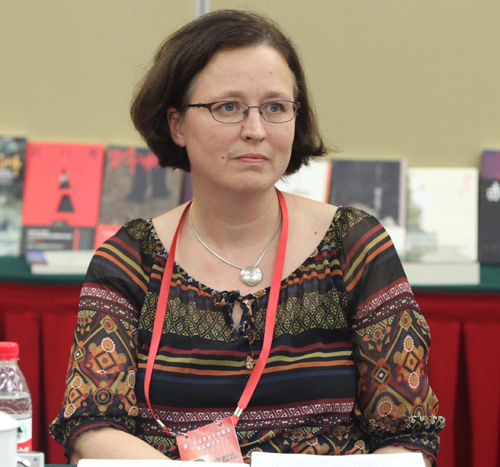 Warsaw (People’s Daily) – Famed Hungarian sinologist and translator Zombory Klára believes that the reform and opening up has enabled China to accumulate a wealth of cultural power, she told People’s Daily at a recent interview.

“In the past 40 years, China has produced a large number of outstanding writers and literary works. The unique Chinese contemporary literature has also become an important part of the world's cultural treasures,” Klára said.

She said that without China’s reform and opening up, she may not notice China’s contemporary literature and miss this valuable cultural treasure.

Klára recalls that in the 1970s and 1980s, there were Chinese literary greats like Lu Xun, and Lao She’s works were published in Hungary. However, due to language and cultural barriers, not many people truly understand Chinese culture and literature.

With China’s reform and opening up, a large number of Chinese people have come to work and live in Hungary. While promoting the development of bilateral economic and trade relations, they have also stimulated the upsurge in local people learning Chinese and Chinese culture.

In the 1990s, Klára went to China to study Chinese and Chinese literature at the Beijing Language Institute and Peking University. After graduating from the University of Roland, Hungary she began to focus her research on Chinese contemporary literature.

She translated contemporary Chinese writers' works, like Mo Yan, Su Tong and Yu Hua, into Hungarian. And she is the first translator to bring Chinese contemporary writer's works to Hungary.

“Chinese literature blossoms after reform and opening-up,” Klára said. “The reforms and opening up have brought about tremendous changes to the Chinese people economically and spiritually. Chinese contemporary literature is an excellent window for the world to understand contemporary China."

In recent years, Chinese literature has gradually gained in popularity in Hungary and Central and Eastern Europe.

“Many parents in Hungary let their children learn Chinese when they are very young, which makes us very happy and excited.” Klára said.

In 2015, Klára was awarded the China Book Special Contribution Award Youth Achievement Award by the State Administration of Press, Publication, Radio, Film and Television of China for her outstanding contributions to the translation of Chinese and Hungarian literature.

In 2016, Klára was elected chairman of the Hungarian-China Friendship Association. Under her leadership, the first Central and Eastern European Countries-China Literature Forum was held and became a important event for writers from those countries.

“The reform and opening up promoted Chinese literature to the world. It has not only changed China and the Chinese people, but also profoundly affected foreigners like me." Klára said.

"I am very pleased to be able to participate in the process of China's reform and opening up. I also hope to continue to witness the process of the great transformation of the Chinese people."