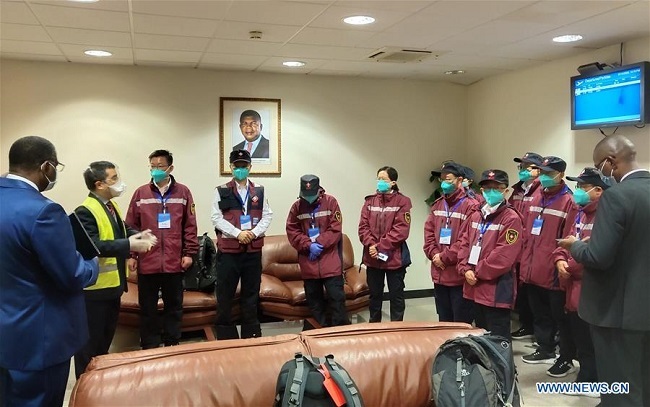 A group of Chinese medical experts, who worked in the front line of the fight against the COVID-19 in Wuhan, the epicenter of the outbreak in China, arrived in Angola on Wednesday night to exchange experience with local professionals and aid the country's fight against the pandemic.

The Chinese professionals are in Angola for a 15-day intensive work in the framework of the solidarity and cooperation between the two governments to help the Southern African country fight the pandemic.

Angola has already benefited from biosafety materials and laboratories from China.

The Chinese specialists will provide training to Angolan doctors on clinical approach to patients with COVID-19.

"We have reached a stage in the curve of the disease. We have patients in more advanced stages. Therefore, nothing better than to exchange experience in laboratories and hospitals for a better approach to patients," Angola's Secretary of State for Public Health, Franco Mufinda, said following the arrival of the Chinese specialists.

The Angolan health official also highlighted the vast experience that the Chinese professionals have that can be beneficial to Angola.

The Chinese ambassador to Angola, Gong Tao, emphasized the good collaboration and solidarity between the two states, which weighed heavily for the doctors of his country to come to transmit their experience in fighting, preventing and controlling the pandemic in Angola.

Angola counts on 2,000 health units, most of which reserved areas for the treatment of the COVID-19 secured by specialist doctors and nurses trained to deal with pandemic cases.