NAKASEKE, Uganda, June 10 (Xinhua) -- Mary Nabunya, 61-year-old, has had internal chest pain for a long time. Visits to her village health center in Kakoola in the central Ugandan district of Nakaseke have not helped as there are constant reports of drug stock-outs and lack of specialists. 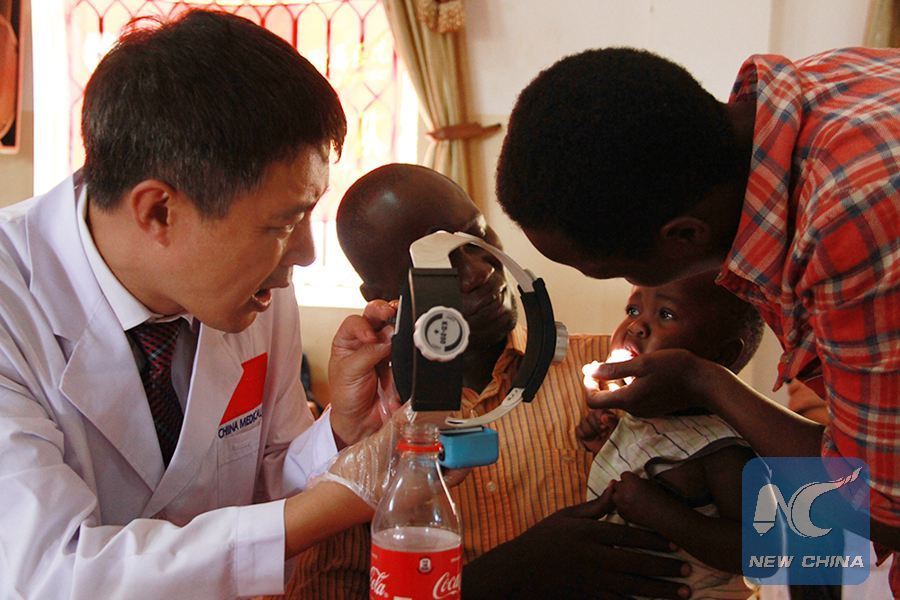 When Nabunya heard that a Chinese medical team was visiting a neighboring village for a one-day medical camp, she could not miss. For her, it was a chance to get the much needed medication free of charge.

Although Nabunya and her friend came early in the morning, they had to brave the long queues to be able to see the medical experts who were stationed at Kapeeka Secondary School.

"I have had a lot of pain in my chest and I also cough a lot but now that I have got the medication, I hope I will get better," Nabunya said.

This medical camp is one of the many that the Chinese medical experts carry out in rural Uganda when they take a break off hospital work in the capital Kampala.

Since 1983, China has sent over 18 medical teams to Uganda consisting of a total of 200 experts.

The teams, with the support from Chinese companies, have traversed different parts of the country, providing the much needed health care.

"Over the past 35 years, the Chinese medical team has treated thousands of Ugandan patients. Besides working in the hospital, we give training to interns and staff," said Cong Linhai, head of the medical team.

Zheng Zhuqiang, Chinese Ambassador to Uganda told a gathering at Kapeeka Secondary School that besides trade and economic relations, China also cares about a healthy population.

"Medical cooperation is one of the most effective cooperation between our two countries," Zheng said, noting that China has previously donated a hospital, medicines, and medical equipment among others.

In areas where medical camps have been held, the local leaders hail the Chinese medical team for extending their services to remote areas.

"Medical services are very expensive to access and when someone provides it free, then we must thank them," said Tom Sserwanga, Chairman of Kayunga district in central Uganda.

"We appreciate the kindness of the China Water and Electric Company who have provided free medical services. Many of these people here have been finding difficulties going to hospital because they don't have money," Sserwanga said.

Ignatius Koomu, Chairperson of Nakaseke district said the medical team lessens the burden of not having enough personnel or drugs especially in the remote parts of the country.

"In our health centers, most times the drugs are not enough and the medical people are rarely on duty, but these Chinese medical people have come with medicines and also treated our people," he said.

Chinese companies operating in Uganda say they have the responsibility to give back to the communities.

Bao Yihong, China CAMC Engineering Co., Ltd. Uganda Office Representative said there is need to have a good working relation with the community.

Yu Bin, ZTE East Africa Region Representative said it is not always about making money but also ensuring that the communities and companies work harmoniously.