Since the first Chinese medical team arrived in Africa in 1963, all kinds of non-profit Chinese medical services have contributed to the continent's healthcare and saved the lives of tens of thousands of people. 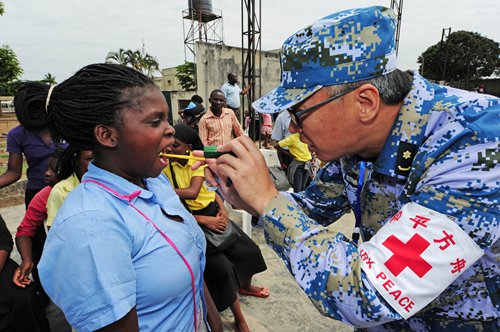 A medical worker from the Chinese naval hospital ship Peace Ark helps to examine a child from Mozambique in November 2017 during an eight-day humanitarian mission there. (Photo: VCG)

In recent years, cooperation in healthcare between China and Africa has witnessed tremendous results, helping forge close ties between the two.

From Addis Ababa in Ethiopia to Windhoek in Namibia, 43 Chinese medical teams are working round the clock providing services across Africa.

China has sent over 20,000 medical workers to Africa since 1963 and some 200 million African people have benefited as a result.

When the outbreak of the Ebola virus disease started spreading in West Africa in 2014, China sent over teams without hesitation.

In February 2014, an Ebola epidemic broke out in Guinea and later spread to Sierra Leone and Liberia, while other countries also reported infections. The outbreak claimed hundreds of lives in months and posed a great threat to the affected countries.

Since the outbreak, China has carried out its largest aid program in the area of health, providing several rounds of financial aid to Africa, sending hundreds of medical personnel and public health experts to the affected countries and training local medical workers.

A friend in need

"A friend in need is a friend indeed, and for that reason, China has truly proven to be our friend indeed through its support in different sectors in this country," said Tanzanian Minister for Education, Science and Technology Joyce Ndalichako in Dar es Salaam earlier this month.

"We are glad and appreciate that most of these trainees will be trained in the areas where the nation is facing a critical shortage of staff," Ndalichako said.

"The coming of the ship has written a new history in the cordial relationship of the two countries," he said.

In Ethiopia, Chinese medical teams have nearly 45 years of experience working across the country.

Mei Gengnian, head of the first Chinese medical team to Ethiopia, died in 1975 in a car accident while he was serving local communities in Jimma, 380 kilometers south of Addis Ababa.

Buried near the spot where he died, his grave is being tended by a local family, and Mei's son has followed his father's footsteps by joining a mission to Ethiopia.

At a ministerial conference in South Africa last year, China called for intensified efforts to improve the accessibility of healthcare services in Africa and scale up support for the health needs of young people and women.

China and Africa have seen deepened cooperation in the healthcare sector. For example, the Brightness Action campaign, a China-led activity for patients with eye illnesses, has witnessed achievements.

In the Republic of Congo, the Brightness Action campaign was launched in 2016 with a Chinese medical team stationed at the China-Congo Friendship Hospital (CCFH), which has received modern surgical supplies and medical instruments from China in recent years.

Zhang Weipeng, an ophthalmologist at the CCFH and also the doctor in charge of cataract surgery, said his department receives an average of 30 patients every day and many of them come here specially for phacoemulsification.

The doctor said some local patients are reluctant to seek treatment until their eyesight is blurred by cataracts, making it more difficult for the surgery to be performed.

Actively involved in training sessions for local people to increase public awareness of eye illnesses and for medical personal to promote their skills, Zhang said his commitment is to "teach a man to fish."

He said only when local doctors can independently perform cataract surgeries can there be a permanent medical team to provide the service to the public.

Zhang said his "biggest joy" is seeing patients regain their eyesight. "It moves me a lot to see that Congolese patients trust Chinese doctors."