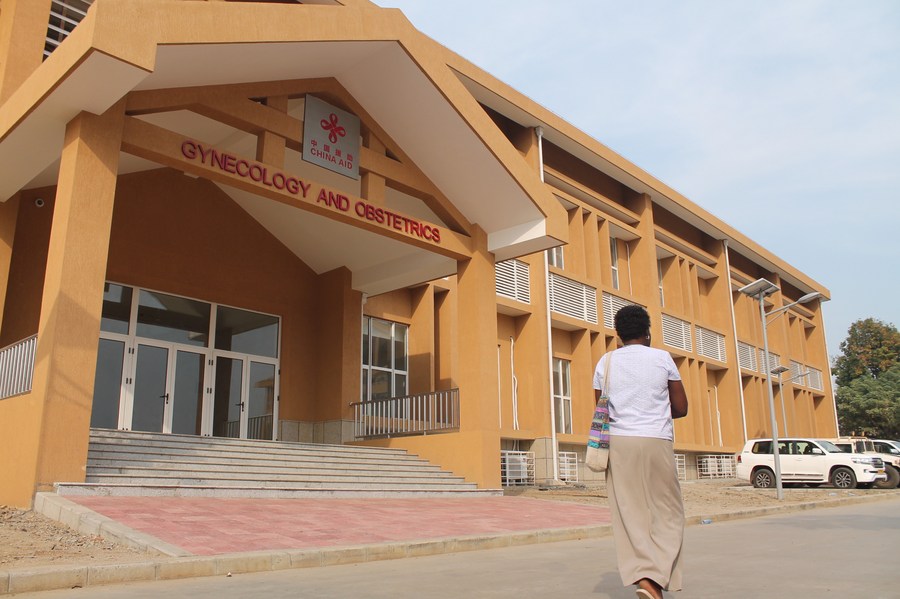 Photo taken on Dec. 9, 2019 shows a view of the China-aided project for the expansion and modernization of Juba Teaching Hospital in Juba, South Sudan. (File photo: Xinhua)

Joyce James, a 48-year-old homemaker, has not been taking high-energy beverages since January and instead opted for low sugar drinks due to diabetes-related complications.

James' health condition has of late improved after visiting the Juba Teaching Hospital where doctors affiliated with the ninth batch of the Chinese medical team diagnosed her condition and prescribed a free treatment regimen.

"My message to patients is that when you feel pain after the treatment, you need to return to Chinese doctors for treatment and you will see improvement," James told Xinhua in the capital Juba.

Yang Jie, a Chinese physician who treated James, said high blood sugar is caused by sugary food and beverages. "Each week we have two days of clinical work and on each day, we receive about 40 patients and the common diseases we are treating are high blood pressure, diabetes, stomach complications, and ulcers," Yang said.

The non-communicable diseases such as diabetes, obesity, and high blood pressure that have spiked in South Sudan are linked to lack of physical exercise, smoking, and harmful consumption of alcohol.

John Otoo, 54, was among several patients who received treatment from Yang after enduring upper abdomen and joint pains for months.

He hailed the treatment he received from the Chinese doctor, adding that his earlier attempts at seeking treatment from private health clinics failed to improve his condition.

"I went to a certain clinic and I was given some drugs but the treatment did not succeed and that is why I came here to see the Chinese doctors," Otoo said.

Sabina Kiyang Michael, an assistant working alongside Yang at Juba Teaching Hospital, said she has acquired extensive knowledge on the treatment of diabetes and high blood pressure in her six-year experience working with various Chinese medical teams.

Since the independence of South Sudan in 2011, Chinese medical teams have been offering free medical services as well as capacity building for local health workers and medical students.