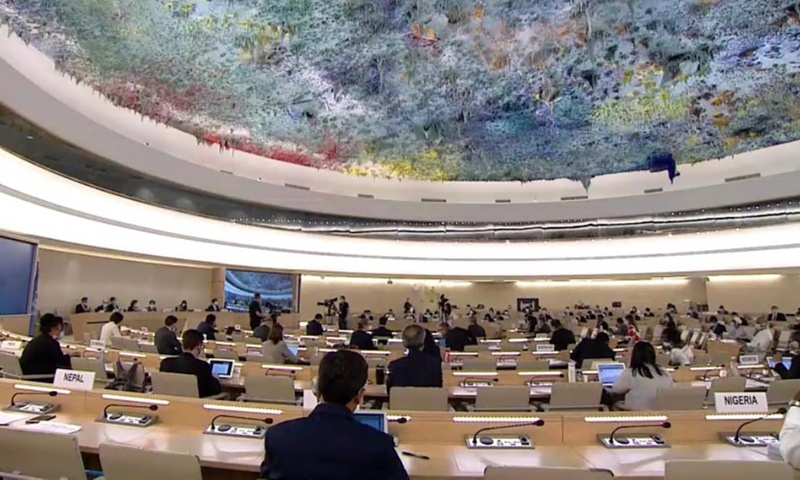 China is deeply concerned about the deterioration of the human rights situation in the US and urges the country to stop human rights violations in all forms, the Chinese Mission to the United Nations stated on Wednesday.

"We regret that the United States of America did not accept most of the recommendations proposed by China at the current universal periodic review for the US," said Jiang Duan, minister of the Chinese mission to the UN in Geneva.

The US has failed to take effective measures to control the COVID-19 pandemic, resulting in the loss of hundreds of thousands of lives, Jiang said in a statement during the adoption of the outcomes of the Universal Periodic Review (UPR) of the United States of America by the UN Human Rights Council on Wednesday.

Meanwhile, US politicians have been passing the buck and shifting the blame, Jiang said.

The US is pursuing vaccine nationalism and has stockpiled a disproportionate quantity of COVID-19 vaccines that far exceed the need for its population, and refused to provide vaccines to other countries, including its allies, Jiang pointed out.

Apart from the disappointing COVID-19 response, racial discrimination and police brutality remain devastating in the US, with perpetrators still at large, Jiang said, noting that Muslims, refugees and immigrants are faced with discrimination and xenophobia there.

Also, armed interventions by the US resulted in tremendous deaths of civilians in other countries, said Jiang. US military personnel slaughtered innocent civilians and conducted torture in their overseas operations, he added.

The US has imposed unilateral coercive measures on some developing countries, which seriously violate international law and cause severe human rights and humanitarian crises, Jiang said.

"The US neither apologizes for its evil past of genocide nor provides reparation to the victims," he said. "Instead, it, distorting facts, maliciously slanders other countries out of political motivation."

China, therefore, urges the US to take the UPR as an opportunity to stop human rights violations in all forms and take effective measures to prevent its human rights situation from further deterioration, Jiang noted.