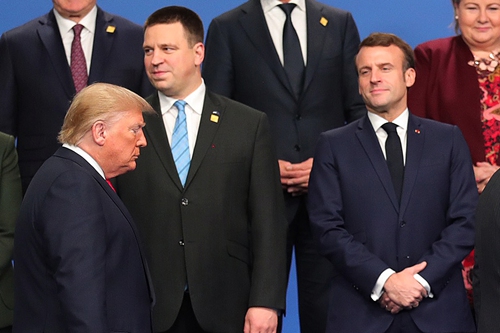 France's President Emmanuel Macron (right) reacts as US President Donald Trump (front left) walks past him during the NATO summit at the Grove hotel in Watford, northeast of London on Wednesday. (Photo: AFP)

Chinese internet users on Thursday made fun with reports of feisty clashes among leaders at the NATO leaders meeting in London, with many dismissing the alliance as an outmoded 70-year-old legacy of the Cold War.

The summit concluded Wednesday with a declaration which for the first time addressed the rise of China as both a challenge and opportunity, Reuters reported on Wednesday.

"They must really have had enough with Trump," another user posted.

Trump reacted on Wednesday by calling Trudeau "two-faced," CNN reported, noting that the US President canceled his press conference scheduled at the end of the NATO summit. 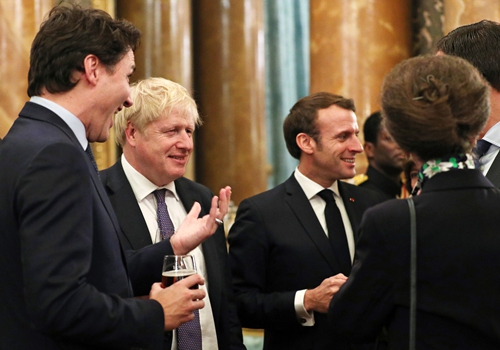 Trump hit back Tuesday saying the French leader had been "very disrespectful" and adding that France had "a very high unemployment rate" and "nobody needs NATO more than France," according to the BBC.

"Nobody knows brain death more than I do," one Chinese Net user commented on Weibo, mimicking Trump's famous line. US status is declining and its allies no longer back it all the time, another users noted.

NATO was founded 70 years ago to stand against the Soviet Union and the Warsaw Pact during the Cold War. It has been 30 years since the end of the Cold War and now NATO does not have a clear objective, Zhang Junshe, a senior research fellow at the PLA Naval Military Studies Research Institute, told the Global Times on Thursday.

He noted that while the US wants the organization to be a tool serving Washington's geopolitical goal, asking other members to boost their defense budgets while promoting "America first," other countries have different ideas, like Macron who believes the common threat facing NATO is terrorism.

These differences have led to internal divisions within NATO and the clashes at the London summit were just small part of a bigger problem, the Chinese analysts said. People will see even more farces from the US and other NATO members, they said.

Reports said the US tried to pressure other NATO members to list China as a threat, but that idea was not included in the declaration.

Commenting on the matter, Hua Chunying, a spokesperson for China's Ministry of Foreign Affairs, said Thursday at a routine press conference that China is indeed growing, but it pursues a path of peaceful development and promotes equality and respect.

There are many objective and reasonable voices within NATO that do not want to make China an enemy, Hua said, noting the biggest threat and challenge the world is facing is unilateralism and bullying. US allies are suffering from this too, Hua noted.

A Chinese military expert who asked not to be named told the Global Times that the Cold War mentality of listing China and Russia as enemies was outdated and ridiculous, as many NATO member countries closely cooperate with China in business and infrastructure development.

They would never want a military confrontation with China, he said.

NATO acknowledges this situation, the expert added. That was reflected in the word "opportunities" in the declaration and the word "challenges" was just a compromise the European members made with the US.

NATO Secretary General Jens Stoltenberg said Monday that NATO does not want a new adversary in China and "There's no way that NATO will move into the South China Sea," CNBC reported on Monday.

This stance obviously contradicts the US who sees China as a strategic competitor and frequently sends warships and aircraft into the South China Sea, Chinese analysts said.

"The US old tricks played in the Cold War do not work anymore," the expert said. "Let's see if Trump would even quit NATO like he did with other treaties."