The Trump administration's abrupt order for hospitals to directly send all COVID-19 related information to the country's health authorities caused wide discussionon Chinese social media platforms on Friday, with many Chinese netizens mocking the behavior as a clumsy and self-deceptive attempt by the US government to cover up its failures in handling its domestic pandemic response. 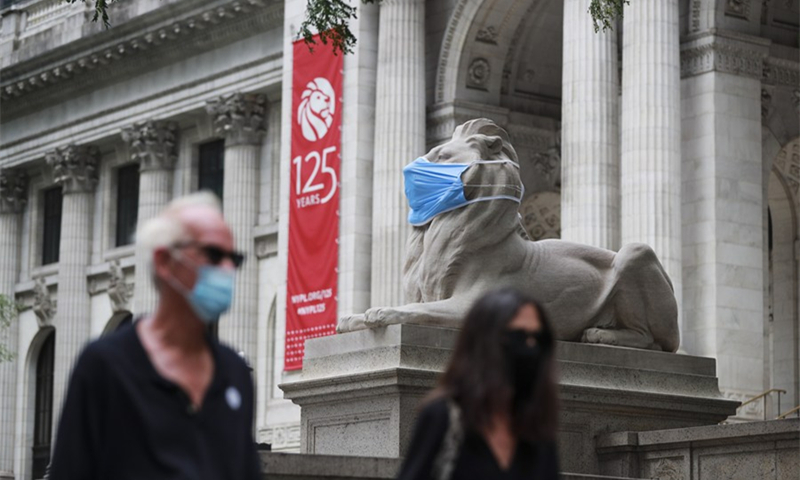 A marble lion is seen with a face mask in front of the New York Public Library on Fifth Avenue in New York, the US, July 8, 2020. (Photo: Xinhua)

The Trump administration confirmed on Wednesday that it had shifted control of hospital's COVID-19 data from the Centers for Disease Control and Prevention (CDC) to the Department of Health and Human Services. Some data, including the current inpatient and intensive care unit bed occupancy, were later found missing from the CDC website after the announcement, CNN reported on Thursday.

On China's Twitter-like Weibo, some topics related to the US' data handover and sudden removal of data had received 140 million views as of press time on Friday. Chinese users scoffed at the Trump administration's actions, suggesting it is only an ostrich policy to "cover up and whitewash" the serious pandemic situation it is facing domestically.

The US government can't face the reality, wrote one user named Rebecca. "The number of new confirmed cases has surpassed 70,000 in a single day there, but the US authorities still bury their heads in the sand, boasting that they've done a good job," she added.

Another user, named Laobanniang, joked that Trump should change his campaign motto to "out of sight, out of mind" in relation to the country's pandemic response. "With COVID-19 data in his hands, Trump will have no more problems singing his own praises in the fight against the coronavirus," she wrote.

Some netizens mentioned Trump's previous controversial remarks; for example, when he said in June that the US' testing was "too good" and "too much" that it made the country "look bad" as it reported high numbers of confirmed cases, reported Fox News.

Criticizing President Trump's bizarre logic, users on Weibo questioned whether the takeover was another attempt by the US government to conceal the actual number of infections and deaths to make the country's situation look "less bad."

Some users expressed their concerns about the US' lack of transparency in relation to the COVID-19 information, which has long been a problem since the virus started to spread across the country.

In early March, US scholars and wider public complained about the USCDC's decision to discontinue reporting the country's number of infected patients. In May, US media criticized the CDC for providing inaccurate information related to the pandemic by making a "debilitating mistake" of "conflating the results of different types of coronavirus tests" and "distorting several important metrics," as reported by The Atlantic on May 21.

The US'most recent actions have heavily damaged its credibility to provide transparent information to its citizens, while its pandemic situation continues to get worse. The country reported 71,434 cases and 966 deaths in a single day between 5:33 pm on Wednesday and 5:33 pm on Thursday local time, adding to the total number of local infected patients and deaths to 3,549,551 and 138,072, respectively, according to statistics from Johns Hopkins University.

"Ironically, the US government keeps groundlessly attacking that China's COVID-19 information is not open or transparent, while it shuts out the ability for its own citizens to understand their country's situation," one Weibo user, named Tongzhourongmei, commented.