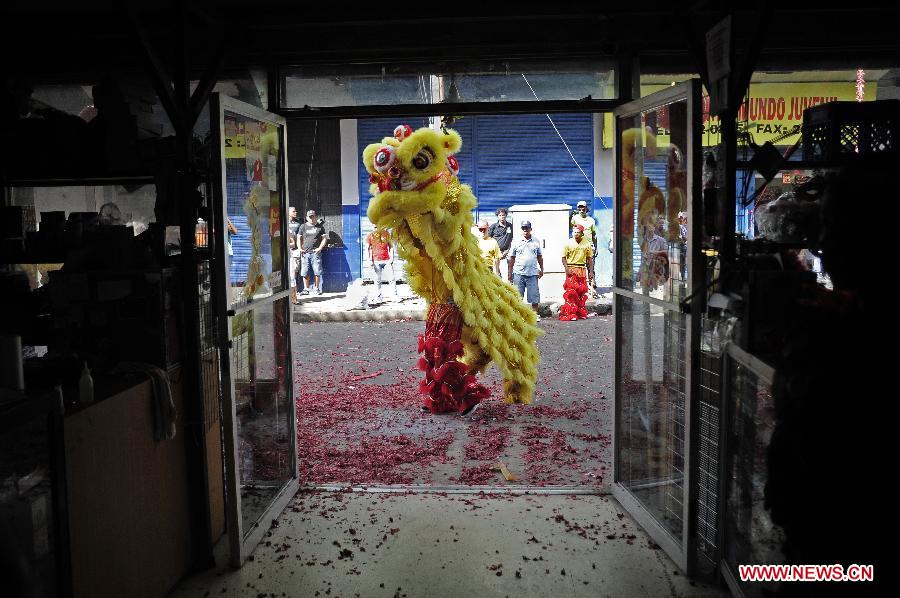 Members of a dance group perform the lion dance during the Chinese Lunar New Year celebration, in Panama City, capital of Panama, on Jan. 31, 2014.[Photo/Xinhua]

PANAMA CITY, Jan. 14 (Xinhua) -- As many as 25,000 people are expected to take part in the Chinese Lunar New Year celebrations scheduled to be held in Panama from Jan. 24 to Feb. 9, organizers said on Tuesday.

Celebrations will kick off on Jan. 24, the eve of the Chinese Lunar New Year, at the Atlapa Convention Center, Ying Xie, spokesperson for the General Foundation of Chinese Business Owners in Panama, told reporters at a press conference.

Celebrations will culminate on Feb. 9 with performances at the capital's Balboa Theater by a group of renowned Chinese artists currently on a world tour.

Performances featuring the classic lion dance, acrobatic troupes and Beijing Opera will be free to the public, said Jackeline He, a member of the organizing committee.

The Chinese Lunar New Year, or the Spring Festival, is the most important holiday in China, and falls on Jan. 25 this year.