BEIJING, Nov. 20 (Xinhua) -- Chinese President Xi Jinping and his Palestinian counterpart Mahmoud Abbas on Tuesday exchanged congratulations on the 30th anniversary of the establishment of diplomatic relations between the two countries. 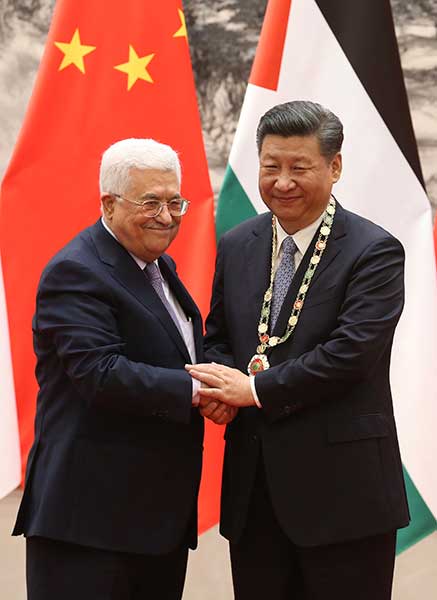 Over the past 30 years, the two countries have conducted exchanges and cooperation in various fields with fruitful results, Xi said.

The Chinese president said he attaches great importance to the China-Palestine relations, and is willing to work together with Abbas to continue pushing forward bilateral friendly cooperation, so as to better benefit the two countries and their peoples.

Noting that China has always supported the just cause of the Palestinian people to restore their legitimate national rights, Xi said China firmly supports the establishment of an independent Palestine state with full sovereignty on the basis of 1967 borders and with East Jerusalem as its capital.

China will push forward the Palestine-Israel peace talks and continue to play a positive role in the early realization of a comprehensive and just settlement of the Palestinian issue, he said.

In his congratulatory message to Xi, Abbas said that he is very proud of the traditional friendship between the two countries and their peoples, and highly appreciates the outstanding and important role that China has played in supporting the Palestinian people and their cause.

Noting that the Palestinian people will continue to carry forward the traditional friendship with China, Abbas said he will, as always, value and promote bilateral relations, in order to benefit the two peoples and realize their shared vision.

Li said he is ready to work together with his Palestinian counterpart to bring about greater progress in the friendly cooperation between the two countries.

In his message to Li, Hamdallah expressed deep gratitude for the precious support from China in the past 30 years, saying that Palestine is willing to boost and expand bilateral relations and cooperation with the Chinese government to realize their common interests.