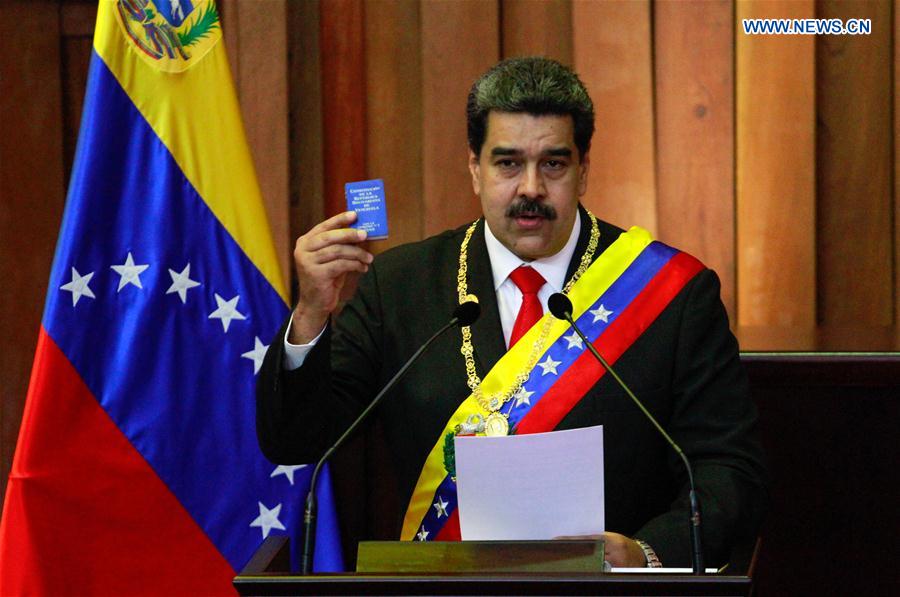 Venezuelan President Nicolas Maduro holds a small copy of the constitution as he gives a speech during the presidential inauguration ceremony in Caracas, Venezuela, on Jan. 10, 2019. Nicolas Maduro was sworn in before the Supreme Court of Justice to begin a new six-year term on Thursday. (Photo: Xinhua)

Han said that China and Venezuela are good friends with mutual trust and assistance as well as good partners with win-win cooperation.

This year marks the 45th anniversary of the establishment of diplomatic ties between China and Venezuela, said Han, calling on the two sides to take this opportunity to continue to implement the important consensus reached by the two heads of state, firmly enhance mutual support, strengthen pragmatic cooperation to further enrich the connotation of the comprehensive strategic partnership between the two countries and bring more benefits to the two peoples.

For his part, Maduro thanked President Xi for sending a special envoy to attend his inauguration and asked Han to convey his warm greetings to President Xi.

Maduro said the Venezuelan government and people cherish the friendship with China and admire China's development achievements during the past 40 years of reform and opening up.

He said Venezuela is willing to maintain high-level exchanges with China, share experience in the governance of the country and promote pragmatic cooperation in various fields such as agriculture to jointly build a better future of bilateral relationship.