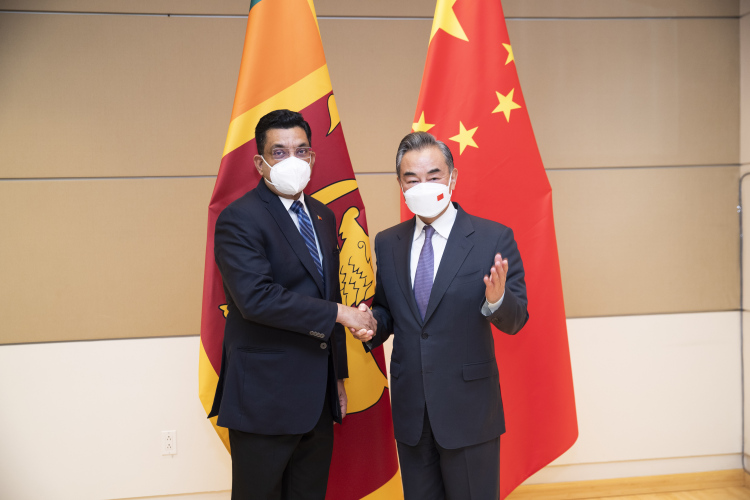 As strategic cooperative partners, Wang said, China and Sri Lanka have always shared weal and woe and sincerely helped each other.

Wang congratulated Sri Lanka on its progress in stabilizing the situation and alleviating the difficulties in the country. China has provided medicine, rice, fuel and other emergency humanitarian assistance to Sri Lanka and will continue to help the country overcome its temporary difficulties within its capacity, he said.

For his part, Sabry highlighted the solid foundation of the friendship between Sri Lanka and China.

Sri Lanka will never forget China's strong support over the years to its economic and social development, especially when the South Asian country encountered difficulties, he noted.

China is an important development partner of Sri Lanka, and Chinese enterprises have made contributions to Sri Lanka's growth, he said, underlining that the so-called "Chinese debt trap" is an utterly groundless rumor.

Sri Lanka welcomes investments from all countries including China, and will ensure the security and reasonable returns of the investments, Sabry noted. He also thanked China for helping Sri Lankan students resume study in China.

China-Sri Lanka cooperation is South-South cooperation based on equality and mutual benefit, Wang said. The narrative of "debt trap" created and spread by certain countries is essentially a trap of underdevelopment for developing countries, he added.

China and Sri Lanka will continue to render mutual understanding and support, and will stand firmly together on issues of sovereignty, independence and national dignity, Wang said.

The two sides will speed up the negotiation process and strive for an early conclusion of a free trade agreement, thereby boosting the confidence in and stabilizing the expectations for their economic and trade cooperation.