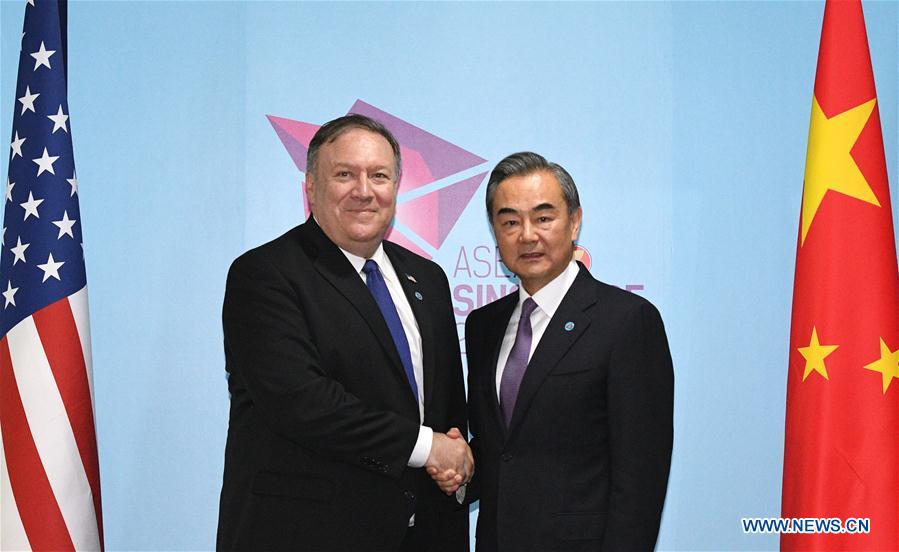 China and the United States agreed on solving the concerns of both sides through dialogue, Chinese State Councilor and Foreign Minister Wang Yi said after meeting with US Secretary of State Pompeo on Friday afternoon in Singapore.

"We are willing to resolve the concerns of both sides via talks on the basis of an equal footing and mutual respect," Wang said.

Pompeo agreed with this direction, and told Wang he does not want the current frictions to continue. The US official also reiterated that the US will adhere to the one-China policy, Wang said, speaking to reporters after meeting Pompeo on the sidelines of the 51st Association of Southeast Asian Nations (ASEAN) Foreign Ministers' Meeting in Singapore.

He stressed that cooperation is the only correct choice for China and the US and the universal expectation of the international community, while opposition can only bring dual loss and will hurt the peaceful and stable development of the world.

Wang said they exchanged views on issues related to the Korean Peninsula.

He stressed that the high-level meeting between US and DPRK officials clears the direction for solving problems on the Korean Peninsula, by realizing the denuclearization of the peninsula and establishing a peace mechanism.

Wang said he encouraged Pompeo and DPRK Foreign Minister Ri Yong Ho to build trust and implement the consensus that their leaders reached in June.

Ri arrived in Singapore on Friday and will attend the ASEAN Regional Forum on Saturday.

"The direction is correct, although the process might be long and winding. But there is agreement on the direction, which is beneficial to the region and to world peace at large," Wang said. "Therefore we should follow through on it."(CGTN)