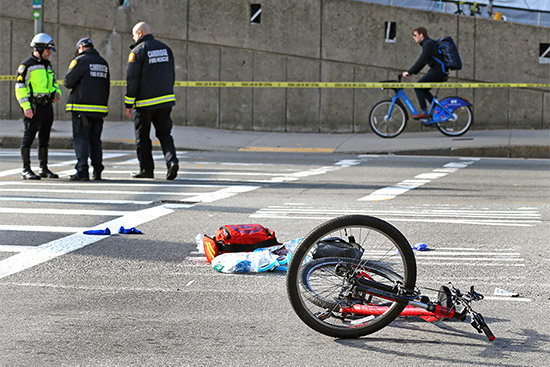 A Boston University graduate student died after an accidental collision between his bicycle and a dump truck in front of the Museum of Science parking garage Friday morning, local media reported.

The victim, 24-year-old Meng Jin (GRS’19), is from Shanghai, China. He had arrived at BU in September to begin graduate studies in economics and was living in Cambridge.

“We are extremely sad about this most unfortunate accident,” says Kenneth Elmore (Wheelock’87), associate provost and dean of students. “The University’s thoughts and prayers are with the student’s family.”

The crash occurred on Monsignor O’Brien Highway in front of the museum at about 8:15 am, according to State Police, who are conducting the accident investigation. The student was rushed by ambulance to Massachusetts General Hospital, where he was pronounced dead. State Police have notified his family.

The investigation is ongoing. No charges have been filed, but if there were to be any, it would not happen until the conclusion of the investigation, according to State Police spokesperson David Procopio.

(With input from BU Today)