With much of Southeast Asia struggling with runaway coronavirus infections, China is bringing some relief to the region with fresh supplies of vaccines and other medical supplies. 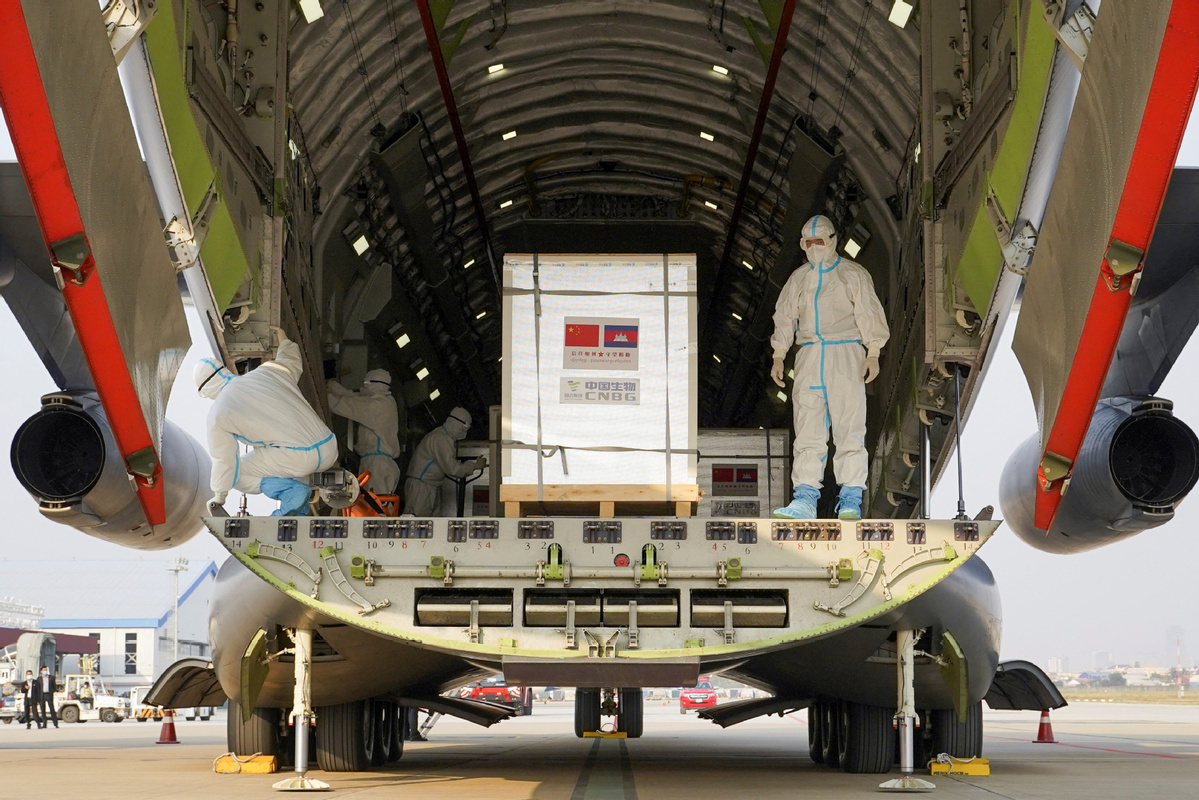 A shipment of 600,000 doses of the coronavirus disease (COVID-19) vaccines donated by China arrives at the Phnom Penh International Airport, in Phnom Penh, Cambodia, on Feb 7, 2021. [Photo/Agencies]

Three million doses of a COVID-19 vaccine from drugmaker Sinovac Biotech arrived in Phnom Penh on Thursday. With the supplies, Yok Sambath, the Cambodian health ministry's secretary of state, said her nation can now bolster its immunization campaign.

Cambodia, like other countries in the region, has seen an upsurge in infections driven by the more contagious Delta variant of the coronavirus. Supplies of Chinese-made vaccines are going to most of the countries in Southeast Asia.

In Cambodia, some 25 million vaccine doses have been received, mostly from China, according to Yok Sambath.

As of Sunday, Cambodia has vaccinated about 84 percent of the 10 million targeted for jabs, according to its health ministry. The country started its vaccination campaign on Feb 10.

China's Ambassador to Cambodia Wang Wentian on Aug 11 handed over a batch of medical supplies donated by a number of Chinese municipal governments, including oxygen concentrators and disinfection tablets. Also donated were 10 boxes of traditional Chinese medicines designated as a treatment for COVID-19 in China.

He notes China's support has also been crucial for other countries in the region, such as Laos, Myanmar and Thailand, which have been battling the Delta variant.

In Laos, a handover ceremony for a fifth batch of China-donated COVID-19 vaccines was held on Wednesday, according to the Chinese embassy.

China has donated over 2.9 million vaccine doses to Laos. Since a second wave of infections began there in April, China has sent a fresh team of medical experts and emergency anti-pandemic supplies to help the country control the outbreak.

At the handover ceremony for the latest doses, Lao Prime Minister Phankham Viphavanh said the donation, made in response to the Lao government's request, will make a huge contribution to Laos' goal of vaccinating half its population this year. Laos expects to receive 7.5 million vaccine doses this year, given by other countries as well as through the COVAX facility.

"The donations and supplies made by China to various Southeast Asian countries are generally appreciated," said Ngeow Chow Bing, director of the Institute of China Studies at the University of Malaya, in Kuala Lumpur.

Chinese nongovernmental organizations have also been active in the global fight against the pandemic.

On July 7, the Hong Kong-based GX Foundation donated 20 metric tons of medical supplies to Cambodia, after a similar donation to Laos in June.

Emily Chan Ying-yang, chief executive of GX Foundation, said the foundation, whose main project is combating cataracts, is helping in order to address humanitarian needs in countries participating in the Belt and Road Initiative.

As soon as the pandemic eases, the foundation will provide cataract surgeries for those in need in Laos and Cambodia, extending the healthcare cooperation and enhancing people-to-people ties, Chan said.

Southeast Asia has reported more than 39.9 million COVID-19 infections, with more than 610,900 deaths as of Monday, according to World Health Organization data.

The Philippines on Sunday confirmed its first case of the Lambda coronavirus variant, in a 35-year-old woman. The Lambda variant has been classified as a variant of interest by the WHO.

More than 1.74 million cases have been logged in the country, according to the WHO.