LOS ANGELES－The shining sun and the warm weather on Wednesday morning invited tens of thousands of people out on the streets to watch the 131st Rose Parade in celebration of the New Year. 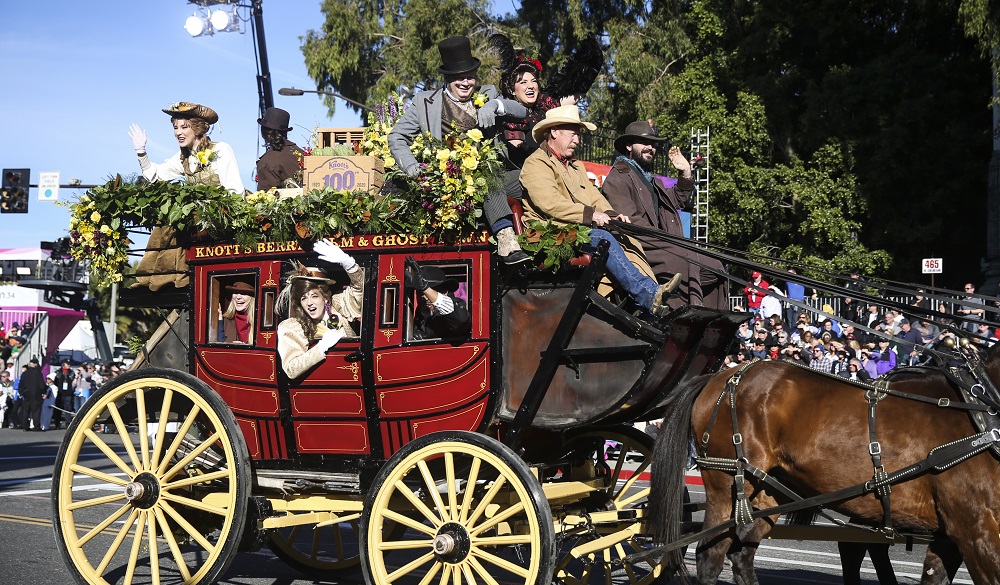 Hosted by Hoda Kotb and Al Roker－popular co-anchors of the Today Show, NBC's top-rated morning talk show－the parade held in the city of Pasadena is a family favorite, a mainstay in the West Coast and an iconic New Year's Day tradition.

"The Rose Parade is an institution. We've been coming to it for 20 years," said Chuck Hamil, a resident of Chino, California. "We all love the beautiful floats."

The Rose Parade is most famous for its gorgeous, spectacularly designed floats of all shapes and colors. They are exotic, multihued creations in all the colors of the rainbow, and as required by the parade rules, the floats must be covered entirely in flowers, seeds and other exotic plant materials.

Each float of the competitors has its unique theme. One of the most beautiful floats was Chinese-themed, which won the Golden State Award of this year's parade with a description by judges as the "most outstanding depiction of life in California".

It was a stunning creation by the Huntington Library, Art Museum and Botanical Gardens, home to many exotic Asian plants as well as the famed Chinese Garden styled after a Suzhou scholar's garden nearing completion after 12 years of construction.

The colorful Huntington float, named Cultivating Curiosity, incorporated prominent elements of the Chinese Garden, one of which is the Pavilion of the Three Friends, a Chinese-style temple named for the traditional "three friends of winter" in the ancient Chinese culture: Bamboos, pines and plum blossoms.

Other rare and exotic elements depicted by the float include the Rose Garden Tempietto, a high-arched Japanese Moon Bridge, replicas of paintings by Mary Cassatt and Edward Hopper, as well as a copy of the ancient text－Geoffrey Chaucer's The Canterbury Tales－which the library owns.

The Rose Garden Tempietto is an 18th-century French stone temple that houses the classical sculpture－Love, the Captive of Youth－which depicts Cupid and his captor, a fair maiden.

Spectators were also amazed by Donate Life's float to honor organ donors' gift of life, Blue Diamond's tribute to Almond Growers float, the City of Hope's elegant float commemorating its 107th anniversary, and the delightful float by Amazon's "Troop Zero" TV with replicas of the Voyager Space shuttle, a rocket, a satellite dish, a school bus, and towering pseudo-pines.

"City of Hope saved my mother's life when she had ovarian cancer," said parade-goer Michelle Cohen. "I tear up whenever I see their amazing floats."

Huntington Library President Karen R. Lawrence said: "The Huntington's incomparable collections have had an extensive reach over the past century, and we expect them to continue to inspire visitors, new and old, for the next 100 years in powerful and unpredictable ways.

"We welcome the national and international exposure that this celebrated parade provides and look forward to this joyful moment during our centennial as a way of sharing our treasures with audiences the world over."

Since 1890, the Rose Parade, hosted by the Pasadena Tournament of Roses, is an annual parade to mark the start of the Rose Bowl Game, on New Year's Day. The tradition has been uninterrupted despite the two world wars.