WASHINGTON, Jan. 14 (Xinhua) -- Chinese Vice Premier Liu He, also a member of the Political Bureau of the Communist Party of China Central Committee and chief of the Chinese side of the China-U.S. comprehensive economic dialogue, met here Tuesday with the head of the International Monetary Fund (IMF) and U.S. business leaders. 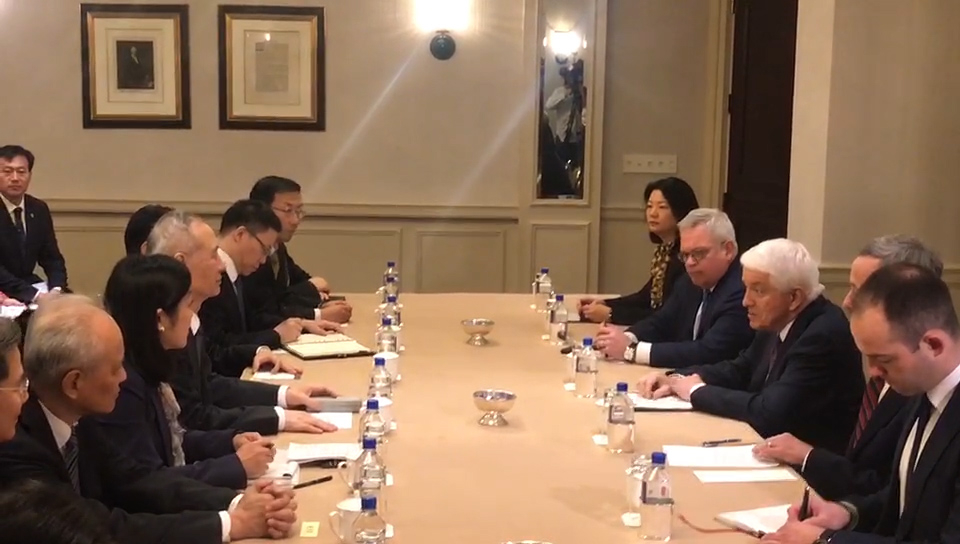 China and the United States have reached a phase-one economic and trade agreement on the basis of equality and mutual respect, which will be formally signed on Wednesday, Liu said.

That is beneficial to China, the United States and the whole world, he said, adding that its significance is not only in the field of economy and trade, but also in safeguarding world peace, stability and prosperity.

As two major responsible countries, China and the United States, despite their different ideologies and different political and economic models, are fully capable of cooperating with each other for mutually beneficial development, Liu said.

After signing the agreement, the two sides should make joint efforts to implement it and obtain tangible results, he added.

Georgieva said she sincerely congratulates China and the United States on the upcoming signing of the phase-one economic and trade agreement, which injects stability into the two countries and the world economy.

It is beneficial not only to the economies of the two countries, but also to the world economy, she added.

Noting that the IMF has raised its forecast for China's economic growth in 2020 to 6.0 percent from 5.8 percent, Georgieva said that the IMF, whose main mission is to maintain world economic and financial stability, will as always provide fact-based policy recommendations conducive to world economic growth and do everything possible to unite all countries and resolve existing differences.

Donohue and Allen said the phase-one deal between the United States and China sends a very positive signal, which greatly benefits businesses and markets, and helps promote economic growth and prosperity in both countries as well as the world.

They said that the U.S. Chamber of Commerce and the U.S.-China Business Council as well as their affiliated institutions will do their best to support the governments and businesses of the two countries in implementing the phase-one agreement and enhancing mutual trust, and continue to play a positive role in U.S.-China economic and trade cooperation and the development of bilateral relations.