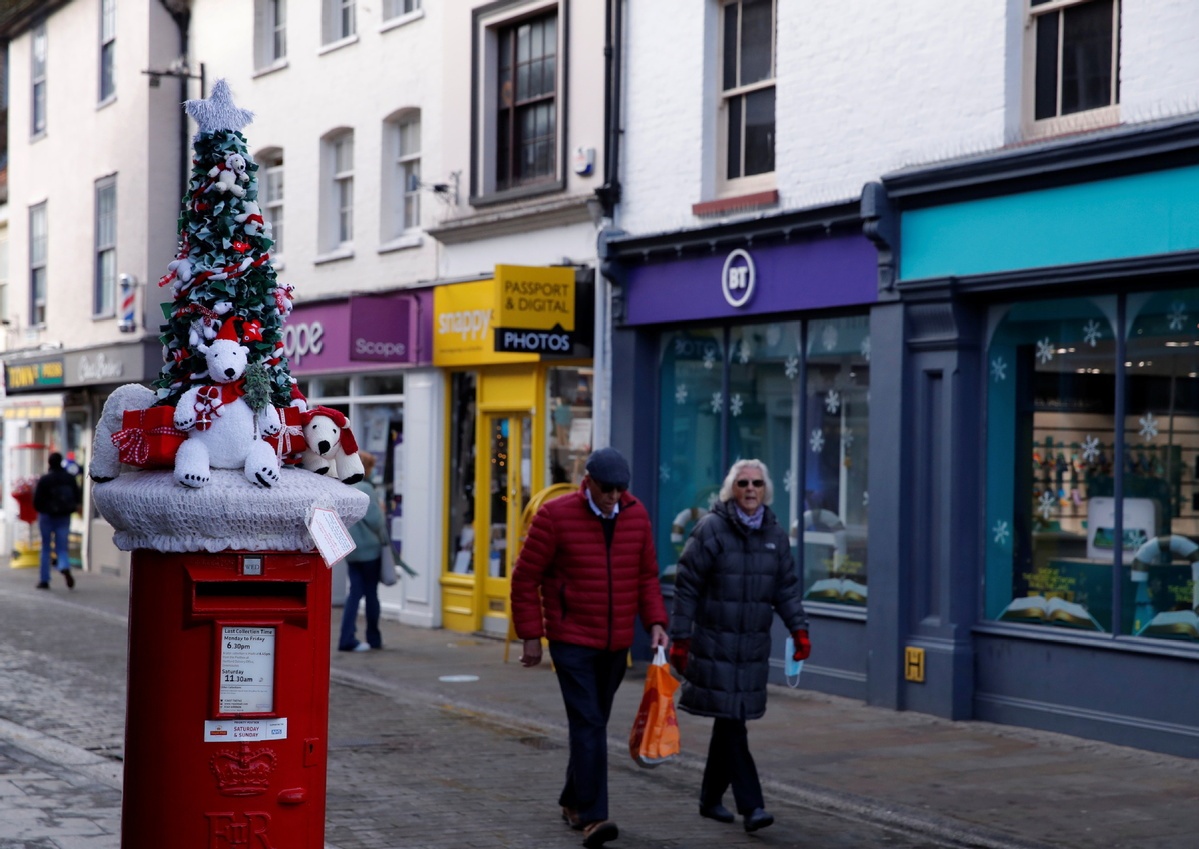 A Royal Mail postbox is seen with a decorative Christmas topper in Hertford, Britain, on Dec 9, 2020. [Photo/Agencies]

Pressure is mounting on the British government to reconsider its proposals for a five-day relaxation of COVID-19 regulations during the Christmas period, amid growing fears of a further rise in infections.

Two of Britain's leading medical journals have written a joint editorial for only the second time in 100 years, warning that the plans are a "rash decision" that will "cost many lives".

Downing Street insists it will not change its mind, and chief secretary to the Treasury Steve Barclay told Sky News "it is important that people do the minimum that is possible … people will be making their own judgements".

However, the article published by the Health Service Journal, or the HSJ, and British Medical Journal, or the BMJ, said people might see the relaxation "as permission to drop their guard", with serious consequences.

"We are publishing it because we believe the government is about to blunder into another major error that will cost many lives," said HSJ editor Alastair McLellan and the BMJ's editor-in-chief, Fiona Godlee.

Their comments come as London and many surrounding areas move from Tier 2 of restrictions to Tier 3, as the result of a significant increase in infections.

"Members of the public can and should mitigate the impact of the third wave by being as careful as possible over the next few months," the joint editorial said. "But many will see the lifting of restrictions over Christmas as permission to drop their guard.

"When government devised the current plans to allow household mixing over Christmas it had assumed the COVID-19 demand on the (National Health Service) would be decreasing," it continued. "But it is not, it is rising, and the emergence of a new strain of the virus has introduced further potential jeopardy."

Devi Sridhar, chair of global public health at Edinburgh University, said scientists could only advise, it was up to politicians to make judgement calls, but added that "mixing at Christmas is a terrible idea" and that should be the message.

"We're going to pay for this at some point," she added. "It's not like it can just happen and that we won't bear the consequences in January and February."

Latest figures published by the Office for National Statistics show that during the third quarter, UK redundancies rose at the highest rate yet in the pandemic, with 370,000 people losing their jobs between August and October.

Overall, the number of Britons on payrolls fell by 819,000 between February and November, and there is more worrying news for employees as a two-year study by trade union Community and the Fabian Society think-tank has warned that an increased drive toward the automation of low-paid jobs in sectors such as retail and hospitality could add to workers' problems.

The study found that 61 percent of jobs put on furlough in the first half of the year were in sectors that have previously been identified as being at the highest risk of moving to automation.

Labour MP Yvette Cooper, who led the inquiry, said that although technology had played a significant role in helping save some jobs earlier in the pandemic, certain sectors of the economy were now embracing automation "on steroids", and this came in the context of "a much more difficult labor market and a deeply damaged economy".

The Food and Drink Federation has also released data giving a stark picture of the state of the country's food exports, with a warning that ongoing uncertainty over Brexit makes the situation even more challenging.

Over the first nine months of the year to September, exports fell by 11.6 percent compared to the same period in 2019, with sales to both the European Union (down 9.3 percent) and non-EU markets (down 14.8 percent) declining.

Sales to Spain slumped by nearly 34 percent, but Ireland remained the top EU destination for British food exporters, with almost 30 percent of all EU sales.

Graham Hutcheon, managing director of group operations at spirits manufacturer Edrington, said the figures showed the treacherous times companies had been working in, and highlighted the dangers that lay ahead.

"Our industry has experienced a substantial drop in exports in 2020 largely due to the impacts of COVID-19 on the global hospitality sector, after a decade or more of continuous growth," he said.

"With the end of the (Brexit) transition period now just days away, food and drink businesses are facing another massive export challenge."