WORLD Chunk of Tappan Zee Bridge is demolished with explosives

Chunk of Tappan Zee Bridge is demolished with explosives 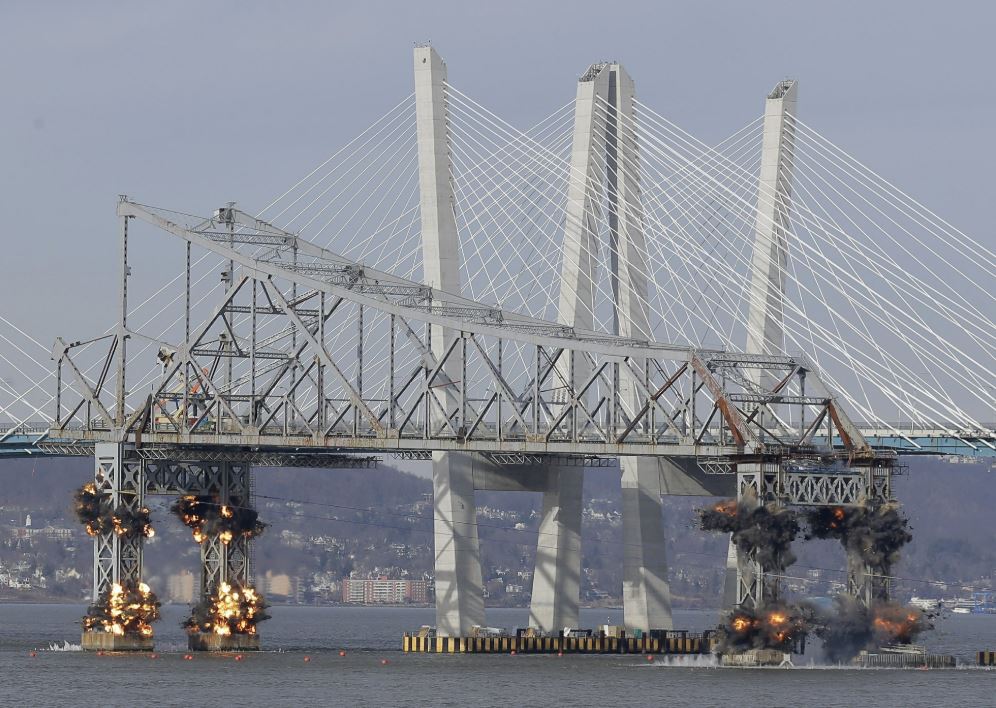 A section of the old Tappan Zee Bridge is brought down with explosives in this view from Tarrytown, N.Y., Tuesday, Jan. 15, 2019. (Photo: AP)

A big chunk of the Tappan Zee Bridge went down in history — and the Hudson — on Tuesday after a detonation that thrilled onlookers who played hooky from work and school to watch the spectacle.

Despite a few delays, the crowds had cameras at the ready when a boom shook the ground and rattled trees. Acrid black smoke filled the air as the structure dropped straight into the river. It remained about half submerged; the remnants will be salvaged and recycled.

“The fact that you can feel the concussion against your legs was crazy,” said Kathleen Staab, who watched from about a half-mile away.

The structure has already been replaced by the Gov. Mario M. Cuomo Bridge, which carries Interstate 87 traffic between Westchester and Rockland counties, about 30 miles (50 kilometers) north of New York City, at one of the broad Hudson River’s widest spots. The new bridge, which parallels the old one, was closed to traffic during the demolition.

A lighthearted mood prevailed as spectators, bundled against the cold, gathered outside the historic Lyndhurst Mansion.

“My boss let me go,” said Catherine Easton, 56. “I was going to make up a story, but I decided to tell the truth.”

Easton, 56, drove from Redding, Connecticut, with her boyfriend. “We saw our first fireworks together with the bridge in the background,” she said. “So we have a sentimental thing with the bridge and we wanted to wish it goodbye.”

She said, “It was always a neat bridge to drive over, and the views were always so beautiful. But it is always kind of sad to see a piece of history implode.”

Despite the nostalgia, the old bridge had drawbacks.

The Tappan Zee Bridge, which opened in 1955, became a poster child for America’s crumbling infrastructure. Gov. Andrew Cuomo, the son of the new bridge’s namesake, recalled in 2017 an experience familiar to many Tappan Zee drivers — steel plates that shifted beneath traffic, providing unnerving glimpses through road cracks of the chasm below.

The Democrat said he’d envisioned escape scenarios in case he ended up in the water: ”‘Do I take off the seat belt? Do I open the window?’ I had one of those special tools with the hammer and the seat belt cutter.”

“I think it traumatized an entire generation,” he said.

Cuomo watched the demolition by video at the Capitol in Albany. “Boy, it went straight down,” he said as his Cabinet members applauded.

There are plans to dismantle the western portion without explosives sometime this year.