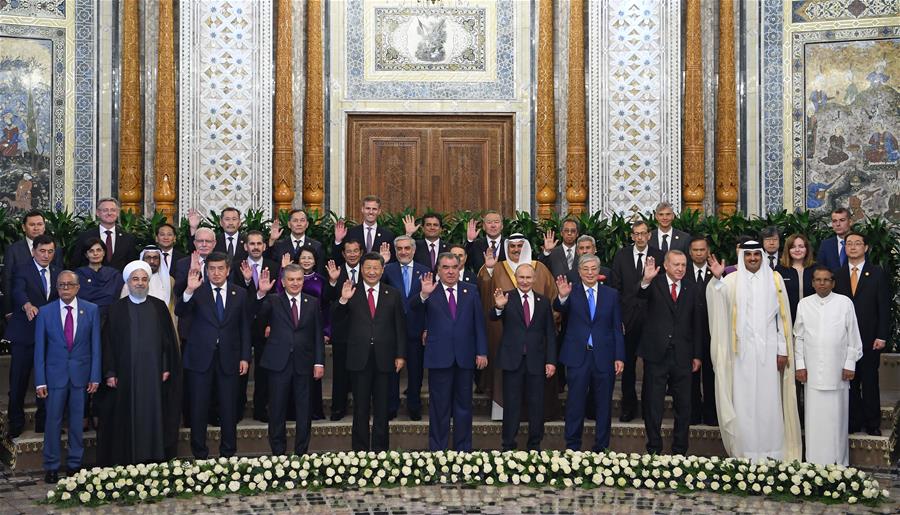 Leaders or representatives of member countries of the Conference on Interaction and Confidence Building Measures in Asia (CICA) pose for a group photo with representatives of observer states and relevant international and regional organizations in Dushanbe, Tajikistan, June 15, 2019. (Photo: Xinhua)

DUSHANBE, June 15 (Xinhua) -- Member states of the Conference on Interaction and Confidence Building Measures in Asia (CICA) on Saturday agreed to make further joint efforts to promote comprehensive and sustainable security and development in Asia, according to a declaration issued after the fifth CICA summit held in the Tajik capital.

In an increasingly interconnected and interdependent globalized world, Asian countries share common interests in building a sustainable environment conducive to peace and security, the declaration said.

CICA members are ready to seek common, comprehensive, cooperative and sustainable security and promote development and progress based on common understanding that has been reached so far, it said.

They reaffirmed commitment to effective multilateralism with the United Nations at its core, and to maintaining and promoting peace and stability, pursuing peaceful settlement of disputes without resorting to the threat or use of force, in accordance with the UN Charter and international law.

As an important multilateral cooperation mechanism in the region, the CICA will develop dialogue on a regional security architecture that is open, inclusive based on universally recognized principles of international law and the UN Charter, and promote international relationship based on mutual respect, fairness and justice, mutually beneficial cooperation, as well as build a community with a shared future for mankind, the declaration said.

Deeply concerned about security threats posed by terrorism and extremism in all forms, the leaders called for devising a comprehensive strategy to combat terrorism.

They stressed that separatism is a threat to national sovereignty, unity, territorial integrity, security and stability, and that the CICA does not support any separatist movements and entities on the territory of the member states.

They also confirmed the necessity and expressed readiness to strengthen cooperation in accordance with international and respective national laws in countering transnational organized crimes and corruption, such as drug trafficking, financial crimes, including money laundering, human trafficking, trafficking in cultural property, illicit arms flows in all their forms.

The member states reiterated their unwavering support to the Iran nuclear deal, called for reviving negotiations on the Middle East peace process, and underlined that peace and reconciliation process in Afghanistan should be inclusive, Afghan-led, Afghan-owned.

They agreed on further joint efforts on non-proliferation, disarmament and arms control, and recognized that negotiations for the conclusion of an international agreement or agreements to prevent an arms race in outer space remain an important agenda of the Conference on Disarmament.

In the declaration, CICA members said that inclusive and sustainable economic growth as well as the elimination of poverty and illiteracy, are among the most effective measures to remove the breeding ground of terrorism and extremism.

The leaders stressed the need to further conduct dialogue and cooperation on regional and sub-regional levels to promote sustainable development, economic cooperation and the peoples' well-being, and called for greater market access and non-discrimination in trade.

They welcomed all initiatives of the member states to promote and strengthen cooperation in various fields, including economy, finance, transport and trade within the geography of the CICA at bilateral and multilateral levels.

Meanwhile, the CICA members stressed the importance of building an open world economy enabling all countries and all peoples to share the benefits of globalization.

They remained firmly committed to a rule-based, transparent, non-discriminatory, open and inclusive multilateral trading system centering around the World Trade Organization, taking into consideration its reform process, and firmly opposed to all forms of protectionism.

In particular, they praised the important role that China had played in advancing the CICA process, promoting CICA institution building, adopting and implementing confidence-building measures in various fields since it assumed the CICA chairmanship in May 2014.

According to the declaration, the sixth meeting of CICA Ministers of Foreign Affairs will be held in 2020 and the sixth CICA summit in 2022.