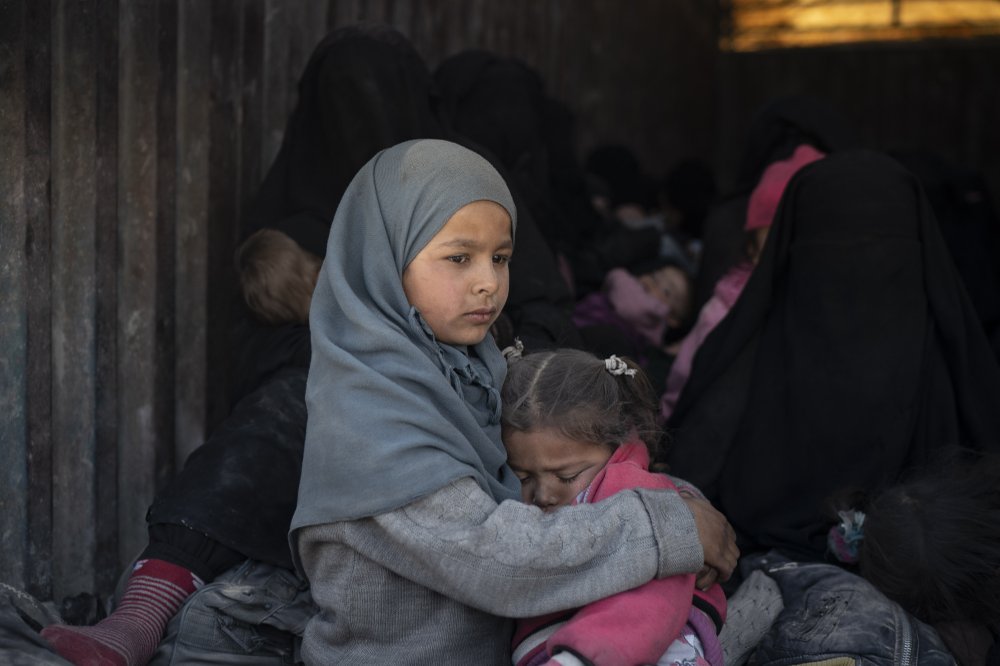 Children ride in the back of a truck that is part of a convoy evacuating hundreds out of the last territory held by Islamic State militants, in Baghouz, eastern Syria, Wednesday, Feb. 20, 2019. (Photo: AP)

A convoy of trucks carrying hundreds of civilians, including men, women and children, left the last enclave held by Islamic State militants in eastern Syria on Wednesday, signaling a possible end to a standoff that has lasted for more than a week.

The tiny enclave on the banks of the Euphrates River is the final scrap of territory left to the extremist group that only a few years ago controlled a vast stretch of territory across Syria and Iraq — at one point nearly from Aleppo to Baghdad — aspiring to create an enduring and expanding jihadi state. Its recapture by US-backed Syrian fighters would spell the territorial defeat of IS and allow US President Donald Trump to begin withdrawing American troops from northern Syria, as he has pledged to do, opening a new chapter in Syria’s eight-year civil war.

Few believe, however, that ending the group’s territorial rule will end the threat posed by an organization that still stages and inspires attacks through sleeper cells in both Syria and Iraq.

Some 300 IS militants — many of them foreign fighters — are believed to be holed up in the enclave in the remote village of Baghouz, along with several hundred civilians believed to be mostly their families. The presence of so many civilians intermingled with the militants in a crammed space halted the military offensive by the US-backed militia known as the Syrian Democratic Forces and led to a dayslong standoff with the militants who refuse to surrender and prevented the civilians from leaving.

It was not immediately clear what prompted the evacuation on Wednesday, although food supplies and ammunition for the besieged militants have been fast diminishing.

An Associated Press team in Baghouz counted at least 18 trucks that emerged through a humanitarian corridor used in past weeks to evacuate people from the militants’ last patch of territory along the river.

Women, children and men, some with checkered headscarves, or keffiyehs, could be seen through a flap opening on the flatbed trucks. One man carried a crutch; the women were engulfed in conservative black garments covering their faces known as niqabs.

There were reports of IS militants surrendering, but the US-led coalition said those reports could not be independently verified. In a tweet, it said the SDF continue to receive civilians attempting to escape to safety and the most hardened IS fighters still remain in Baghouz.

Mustafa Bali, a spokesman for the Syrian Democratic Forces, the US-backed militia spearheading the fight against IS in Syria, confirmed the trucks were carrying civilians out of the enclave.

The number of those evacuated was not clear, nor whether IS militants were also on board the trucks.

On Tuesday, Bali said a military operation aimed at ousting the extremists from the area will begin if they don’t surrender, adding that such an operation would take place after separating or evacuating the civilians from the militants.

An SDF commander, Zana Amedi, said most of the militants remaining inside the enclave are seriously wounded or sick.

The Islamic State group has been reduced from its self-proclaimed “caliphate” that once spread across much of Syria and Iraq at its height in 2014 to a speck of land on the countries’ shared border.

The SDF has been encircling the remaining IS-held territory for days, waiting to declare the territorial defeat of the extremist group.

Nearly 20,000 civilians had left the shrinking area in recent weeks before the evacuation halted last week when the militants closed all the roads out of the tiny area.