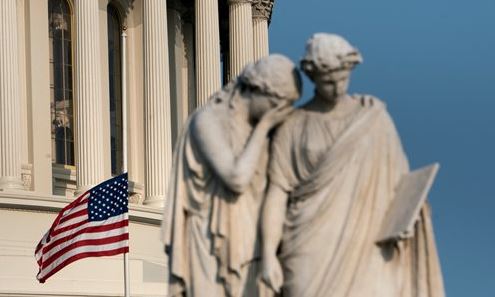 A flag flies at half mast at the US Capitol dome in honor of the late US Senator, John McCain, on Sunday in Washington, DC. (Photo: AFP)

He was a hero, a statesman who cut a towering figure in Washington. But for many in the increasingly angry world of American politics, John McCain will be missed for a far humbler virtue - simple civility.As Americans and others paid tribute to the late Republican senator, who died Saturday of cancer aged 81, some cited a 2008 interaction with a voter as symbolizing his famous insistence on fair and civil discourse.As McCain was campaigning against Barack Obama for the presidency, a gray-haired woman in a red McCain T-shirt told the senator at a town hall meeting that she could not trust Obama because he was an "Arab."McCain politely but firmly corrected her."No, ma'am," he said, taking the microphone back from her. Instead, McCain described Obama as a "decent family man [and] citizen that I just happen to have disagreements with [him] on fundamental issues."The video has gone viral, a seemingly quaint reminder in today's famously combative political world that opponents can clash fiercely on policy while remaining respectful, collegial, even friendly."This voice for civility, to put the country above your party, these are things he taught for years, and never more important than the last year," his fellow Arizona Senator Jeff Flake said on CNN, fighting back tears.As one commenter put it on Twitter, "McCain's passing feels like the end of a far from perfect, but more stable and civil era in American politics."Smackdowns and insultsThe decline in civility - with the endless political smackdowns and full-throated insults - is not entirely new. Nor can it be pinned on Donald Trump alone, although he seems to take pride in coining unflattering descriptions of political foes. McCain himself was known occasionally to snarl at rivals or to tell off-color jokes. He could be snippy, telling reporters, "that's a dumb question" - but then taking the time to offer a full and thoughtful response.McCain "had a temper the size of a volcano," said Larry Sabato, director of the Center for Politics at the University of Virginia. But "you almost always got an apology, followed by quality time with him." And, while voting most often with his fellow Republicans, he "didn't hesitate a minute to work with Democrats," Sabato added."A large part of civility is the ability to admit when you are wrong... McCain never held back on that score." McCain acknowledged in his recently published memoir, The Restless Wave, that he had "disagreed, sometimes too heatedly, with all of" the six presidents with whom he had served.Still, he added, if Americans lose all humility, "we will tear our society apart."The increasingly poisonous discourse has left a mark across the political landscape.In a CBS News poll last year, a lopsided 68 percent of voters said the "tone and civility of US political debate" was growing worse, against only seven percent saying it was getting better.It was a rare result, upon which people across the political spectrum agreed. Feeding the gridlockIf incivility - with the political gridlock that it fuels - is nothing new, analysts say it is amplified by the angry talking heads of cable television, radio and the internet who make a living by provocation. McCain targeted that group in July 2017, when, in a rousing speech from the Senate floor, he urged his colleagues to "stop listening to the bombastic loudmouths on the radio and television and the internet. To hell with them!"More than anyone, Trump tested the limits of McCain's civility.It was Trump who once said McCain was a "war hero [only] because he was captured," adding, "I like people that weren't captured."The fact that McCain suffered broken bones and was bayoneted after his US Navy jet was shot down over North Vietnam was not relevant, Trump said later.McCain largely shrugged off the insult, while saying Trump did owe an apology to the families of those lost or captured.But the senator's exasperation with Trump erupted in full view over the president's appearance in July in Helsinki with Russian President Vladimir Putin.Just 'show up'"The damage inflicted by President Trump's naivete, egotism, false equivalence and sympathy for autocrats is difficult to calculate," the senator said in a blistering statement.   Even plans for McCain's funeral brought reminders of the two men's profound differences.As McCain fought the ravaging brain cancer that ultimately killed him, he asked two former political rivals - ex-presidents George W Bush and Barack Obama - if they would speak at his funeral.According to reports, he explicitly asked that Trump not be invited. Trump's tweeted condolences on Saturday were notably terse.But in his memoir, McCain said the fault for incivility reaches beyond Washington. It is up to voters, he said, to elect people of integrity."If you want politics to be more civil," he wrote, "if you want Congress to argue less and get more done, then show up. Represent... It's important."