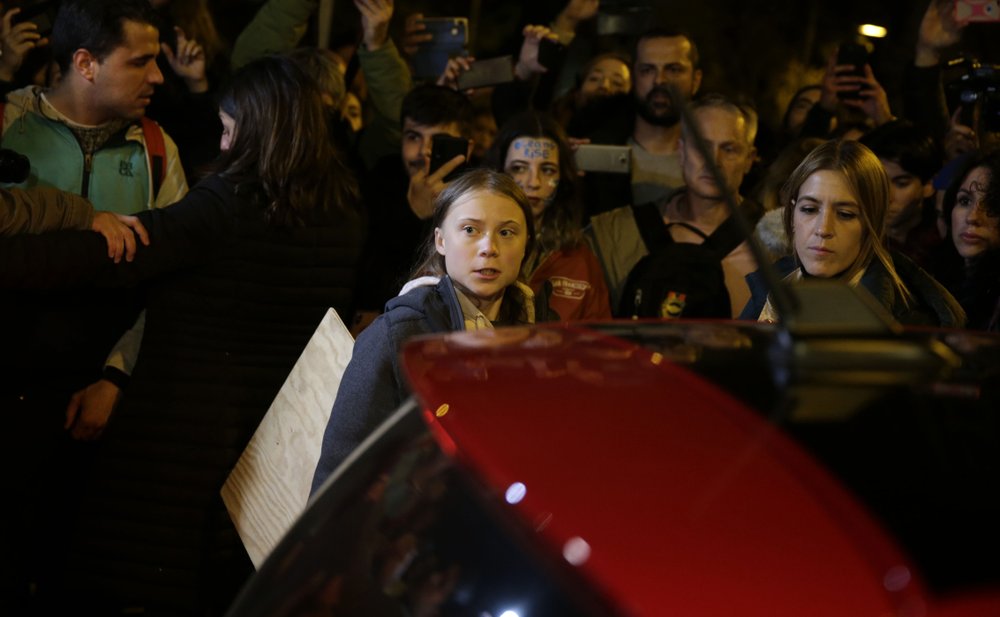 Climate activist Greta Thunberg said Friday that calls for real action against climate change are still being “ignored” by political leaders despite their continuous praise of the global environmental youth movement she helped create.

The Swedish teen was in Madrid, where United Nations-sponsored talks on climate change are underway, to join fellow young climate activists, representatives of Latin America’s indigenous peoples, and thousands of other protesters.

Shesaid at a press conference earlier that she hoped the COP25 summit would lead to “something concrete” and “increasing awareness among people in general.”

“We have been striking now for over a year, and still basically nothing has happened,” she told reporters, surrounded by three activists from Spain and Uganda. “The climate crisis is still being ignored by those in power.”

The 16-year-old was followed by a swarm of cameras and reporters , as well as curious members of the public wanting to film her on their smartphones, from the very first step she took out of an overnight train from Lisbon.

Two young activists earned cheers as they abseiled from a bridge and strung out a banner saying, “Just 8 years till 1.5 degrees C. HOW DARE YOU?” — a reference to forecasts of rising temperatures and what activists complain is a lack of a convincing political response to the threat.

The crush as people tried to get a glimpse of her led Thunberg to pull out shortly after the start, saying police had advised her to leave for safety’s sake, and she climbed into an electric car. She was due to give a speech later at the destination of the protest.

During the Dec. 2-13 talks, nearly 200 countries are meant to streamline the rules on global carbon markets and agree on how poor countries should be compensated for destruction largely caused by emissions from rich nations.

An official directly involved in the negotiations said that despite a few setbacks, the technical negotiations were progressing, although many issues were being left for ministerial-level meetings in the summit’s second and final week.

The official, who asked to remain anonymous given the sensitivity of the discussions, added that a political declaration on greater “ambition” — a buzzword at the summit — was shaping to be “difficult to achieve.”

“A summit that doesn’t end with enhanced ambition would be something that nobody would understand if we take into account what the streets and science are telling us,” the official said.

The talks came as evidence mounts about disasters that could ensue from further global warming, including a study published Friday predicting that unchecked climate change could devastate fishery industries and coral reef tourism.

The study commissioned by 14 nations whose economies rely heavily on the sea says climate change could cause hundreds of billions of dollars in losses by 2050, adding that limiting global warming would lessen the economic impact for coastal countries, but that they also need to adapt to ocean changes.

Demands for greater action by non-governmental organizations and a whole new generation of environment-minded activists were expected to take the spotlight with the presence of Thunberg in Madrid.

Past appearances have won her plaudits from some leaders — and criticism from others who’ve taken offense at the angry tone of her speeches.

Asked about the skepticism on global efforts to fight the warming temperatures expressed by some world leaders, including US President Donald Trump and Brazil’s Jair Bolsonaro, she said: “Some people want everything to continue like now, they are afraid of the change that we, the youth, are bringing.”

“They try so desperately to silence us,” she added.

Next to her, Vanessa Nakate, a 22-year-old member of Uganda’s chapter of Fridays for Future said that young activists don’t want more promises.

“We are tired of the praises that you keep giving the activists,” she said. ”We want you to act.”

Thunberg did not appear unsettled by the commotion surrounding her presence.

“It’s absurd. I laugh at it. I do not understand why it has become like this,” she was quoted as saying by Swedish newspaper Aftonbladet, whose reporter rode with them in an electric car in Madrid.

Separately Friday, an alliance of American states, cities, academic institutions and companies opened its own venue at the UN climate talks, aiming to show that despite the federal administration’s decision to pull the US out of the Paris accord, many Americans remain committed to the treaty’s goal of curbing global warming.

Elan Strait, who manages the “We Are Still In” initiative for the environmental conservationist World Wildlife Fund, said the movement is “a short-term band-aid not only to get those carbon dioxide emissions down but also to encourage policymakers to lay the ground for further achievements.”

“And that, regardless of the color of the government that is in power,” Strait said.

Over 3,800 organizations and corporations representing 70% of US economic output have joined the coalition, organizers claim, amounting to roughly half of the country’s emissions.