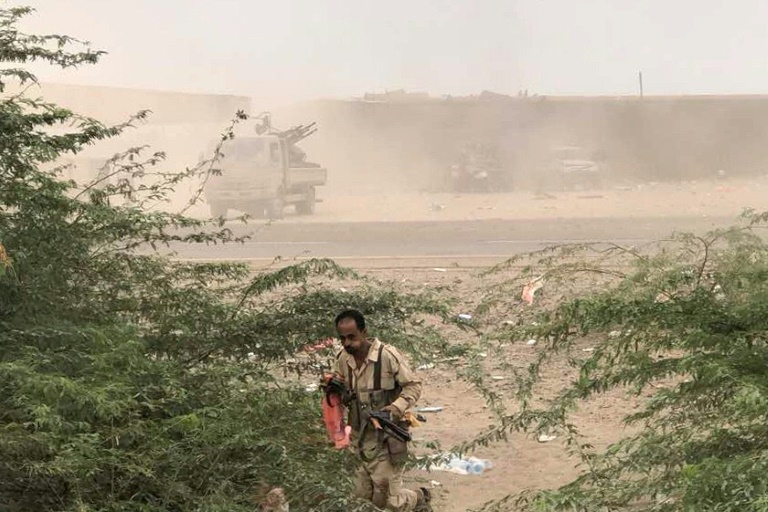 Yemeni pro-government forces launch an attack on Huthi rebels in Hodeida province on June 16, 2018 as loyalists try to take back control of a key port (Photo: AFP)

Yemeni pro-government forces, backed by Saudi Arabia, battled Huthi rebels around the key port city of Hodeida on Sunday, as a top UN envoy held crisis talks with the insurgents in the capital.

Saudi Arabia and its allies in a regional military coalition on Wednesday launched an offensive aimed at retaking the Red Sea city of Hodeida, home to the country's most valuable port which is controlled by the Iran-backed Huthis.

The United Nations has warned the offensive could spark a fresh humanitarian crisis in a country already hit by war and impending famine, sending its envoy for Yemen to the capital Sanaa in a bid to come to a solution with the rebels.

The Huthis, who accuse the UN of bias, however said there were major obstacles to any peace talks shortly after meeting with envoy Martin Griffiths on Sunday.

The United Nations and relief organisations have warned that an all-out assault on Hodeida by the Saudi-led coalition, which commands a massive joint air force, would put hundreds of thousands of people at risk.

Nearly 4,500 households have been displaced in Hodeida province so far this month, the UN said Sunday.

Yemen's military forces have closed in on areas south and west of the port, pushing closer to an airport just south of the docks, sources in the army said.

More than 70 percent of imports to all of Yemen pass through the docks of the Hodeida port.

The army on Saturday claimed it had seized the defunct Hodeida airport, which has been in Huthi hands since 2014.

The Shiite rebels, however, denied the claim in a statement on their Saba news agency on Sunday.

They have also reported Saudi air strikes on Huthi outposts across Hodeida, with the insurgents' representative Hisham Sharaf pointing to the raids as a major obstacle to peace talks.

The highway between Hodeida and the government-held port of Mokha was cut off Friday in battles between the two warring sides, disrupting precious supply lines to the military.

The fighting is already nearing densely populated residential areas, rights groups have warned, and aid distributions have been suspended in the west of the city.

At least 139 combatants have been killed since the launch of the operation on Wednesday, according to medical and military sources, most of them rebels.

The Huthi rebels drove Yemen's government out of Sanaa in 2014, pushing President Abedrabbo Mansour Hadi into exile and sparking an intervention by Saudi Arabia and its allies the following year.

The Saudi-led coalition earlier this year imposed a near-total blockade on Hodeida port, alleging it served as a major conduit for arms smuggling to the rebels by Riyadh's regional arch rival Iran.

The potential capture of Hodeida would be the coalition's biggest victory of the war so far.

Rebel leader Abdulmalik al-Huthi has urged his forces to put up fierce resistance and turn the region into a "quagmire" for the Saudi-led coalition troops.

UN envoy Griffiths arrived in rebel-held Sanaa on Saturday for a second round of talks since taking the post in February.

Huthi representative Sharaf, however, accused the Saudi-backed government of "obstructing negotiations", saying the Hodeida offensive had foiled any potential peace talks in a statement carried by the rebels' Saba news agency.

Multiple rounds of UN-brokered talks between the rebels and the Hadi government have failed to find a solution to the conflict.

Griffiths, whose talks in Sanaa have been largely kept under wraps, is believed to be pressing the Huthis to cede control of the Red Sea port to a UN-supervised committee that would allow deliveries of commercial goods and aid to continue to flow.

On Saturday he called for restraint and said he was in contact with all the warring parties in a bid to halt the fighting.

The UN Security Council on Thursday demanded that Hodeida port be kept open to vital food shipments but stopped short of backing a Swedish call for a pause in the offensive to allow for talks on a rebel withdrawal.

The Yemen war has claimed some 10,000 lives since the Saudi-led coalition intervened in 2015.

More than 22 million Yemenis are in need of aid, including 8.4 million who are at risk of starvation, according to the UN, which has described the conflict as the world's worst humanitarian crisis.