ADDIS ABABA, May 22 (Xinhua) -- United Nations officials on Wednesday said that developing countries are facing the brunt of climate change despite their least contribution to the problem. 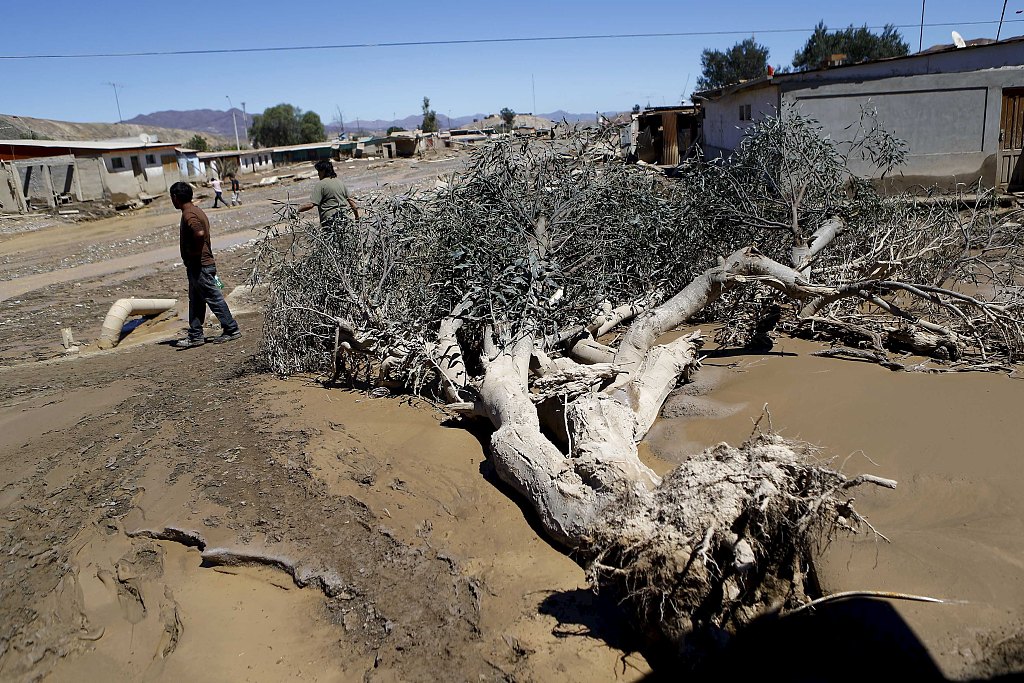 A fallen tree lies on the shore of a flooded river at Diego de Almagro town, March 28, 2015. The heavy rainfall that battered Chile's usually arid north this week happened because of climate change, a senior meteorologist said, as the region gradually returns to normal after rivers broke banks and villages were cut off. (File photo: VCG)

The joint statement was made by Mary Robinson, former president of Ireland and UN Special Envoy on El Nino and Climate, and the Executive Secretary of the UN Economic Commission for Africa (ECA) Vera Songwe during a climate-focused meeting that was hosted by the ECA in Ethiopia's capital Addis Ababa.

Robinson said during the meeting that those who suffer the worst effects of climate change are often the least responsible for it, an ECA statement on Wednesday quoted Robinson as saying.

Robinson has also called for the need for climate justice as the least responsible countries suffer the most from the global threat that emanates from climate change.

Robinson was appointed UN Special Envoy along with Macharia Kamau of Kenya in 2016 to provide the leadership required to tackle climate related challenges in the world.

ECA's Songwe said the African continent can leverage to its advantage in the global fight against the impacts of climate change.

"We didn't create it but we can profit the most from it. A climate smart economy is an extremely profitable economy. It's an economy that will create more jobs and leave us cleaner and better," Songwe said.

Mithika Mwenda, Executive Director of the Pan African Justice Alliance, argued during the discussion that climate justice is not getting the priority it deserves from governments.

"Africa is most affected and impacted by climate change, but we don't do much about it," Mwenda said.

"We need strong governance systems to move the climate discourse and actions forward," he said, urging the ECA to fortify collaboration with African Union and African Development Bank in line with the ClimDev-Africa programme that's mandated by African leaders to create a solid foundation for Africa's response to climate change.