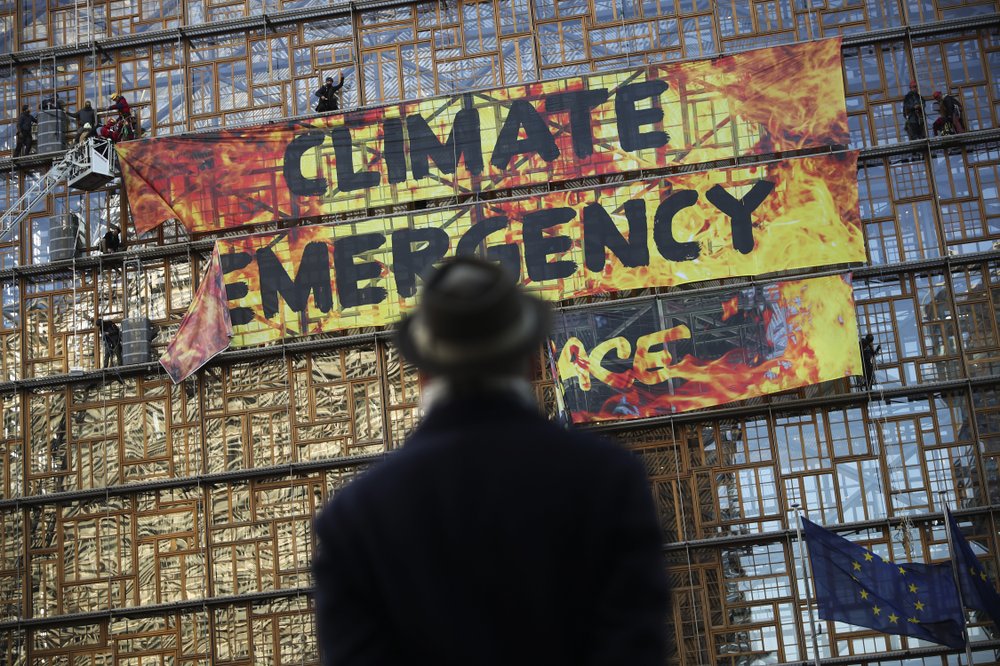 In this file photo dated Thursday, Dec. 12, 2019, a man looks up as police and fire personnel move in to remove climate activists and their banner, after they climbed the Europa building during a demonstration outside an EU summit meeting in Brussels. (Photo: AP)

December served up a warning of the massive challenges ahead for the European Union.

Freak storms wreaked havoc on parts of southern Europe, showing how the impact of extreme weather will drive the bloc’s thinking and climate change policy over the coming years. The EU has already said it wants to spend effort and money to remain the global driver of measures to fight climate change.

The United States also threatened sanctions against companies working on a gas pipeline from Russia to Germany, again showing that the trans-Atlantic alliance between EU nations and the US stands for less and less in the age of power politics.

And across the Channel, a rare December election in Britain brought Conservative Prime Minister Boris Johnson a solid majority to back up his efforts to “get Brexit done.” As things stand, Britain on Jan. 31 is scheduled to become the first nation ever to leave the EU.

All these challenges will need a strong coordinated response from the EU’s soon-to-be 27 nations if they want to live up to their goal of having a bigger global impact.

“Europe must raise its voice more strongly in the world,” German Chancellor Angela Merkel said in her New Year’s message.

Yet as time goes by, such European messages have become ever more plaintive and homegrown issues demand attention.

EU headquarters in Brussels, looking ahead to 2020, is now beset by tireless bickering over a fraction of the 1% of gross national income that the nations are supposed to spend on the EU during the bloc’s 2021-2027 budget period. As populism in Europe has turned the EU and its perceived elites into a pet target, national leaders are wary of being seen by voters as too generous toward Brussels.

EU Parliament President David Sassoli stressed the need for a budget deal “as quickly as possible in order to avoid delays in implementing the Union’s policies and programs.”

Many, however, fear the year 2020 will get partly wasted on intricate EU budgetary maneuvering. That would leave the EU — for all its mighty trading bloc, aid spending and diplomatic footprint — still hitting well below its weight when it comes to global issues.

“Europeans are in danger of becoming hapless playthings in a tussle for pre-eminence between China, Russia, and the United States,” wrote former Swedish foreign minister Carl Bildt and Mark Leonard in a sobering account for the European Council on Foreign Relations think tank.

Such a conclusion might seem counter-intuitive, considering how the EU has bounced back over the past few years and what it is striving for over the next decade.

It staved off Greece’s exit from the shared euro currency and helped several other EU nations recover from staggering debt crises. It was a major player in getting both the landmark 2015 Paris climate accord and the Iran nuclear deal signed. And it stood united as Britain lurched through three years of political turmoil over its impending Brexit divorce from the bloc.

In many ways, 2020 could mark a bright new dawn for the EU. A new regime is in place, with Germany’s Ursula von der Leyen taken over as European Commission president and Belgium’s Charles Michel the new Council President.

In addition, the Brexit will-they-or-won’t-they drama has also turned a corner. The UK is set to leave on Jan. 31 and while the following trade talks will be tense and exacting, it’s hardly the stuff that will liven up newspaper headlines. Tensions still could arise between EU nations with widely disparate economic interests in trading with Britain.

But political shoals lurk. The year still could see a flare-up between EU headquarters and Poland and Hungary, two eastern member states where many feel the democratic credentials on which the bloc is built are being openly flaunted.

EU policies on climate change, the pre-eminent issue where the EU wants to lead the world, are facing domestic challenges. Coal-burning Poland is resisting calls to move more quickly in fighting climate change and farmers and workers in the Netherlands, France and beyond have protested new laws aiming to curb pollution. An EU summit in December had to go through linguistic contortions to claim a deal on an overall commitment to achieve carbon neutrality by 2050.

Outside EU borders, the United States has gone from a trusted ally under former President Barack Obama to an unpredictable partner under Donald Trump, who pulled out of the Paris climate accord that the EU was instrumental in brokering.

Strong recent disagreements over Iran policy and NATO show the trans-Atlantic rift is widening between the allies.

The EU is still a staunch defender of multilateralism and seeking global compromise.

“The resurgence in great power competition has put pressure on the EU’s dream of a multilateral world order,” Bildt and Leonard wrote. “The EU wants to play softball in a hardball world.”