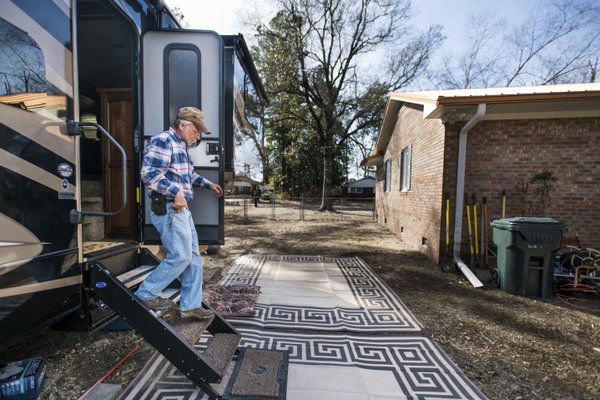 Kevin Tovornik exits his travel camper located in the back yard of his home damaged by flooding from Hurricane Florence near the Crabtree Swamp Friday, Feb. 1, 2019, in Conway, SC. (Photo: AP)

When he took the job 15 years ago, Horry County Emergency Manager Randy Webster figured his biggest disasters would be wind and surge rolling over his county’s beaches, South Carolina’s top tourist destination.

Instead, his worries have shifted inland, where rivers overflowing their banks have caused two massive floods in three years.

“We’re getting into this sort of unknown territory,” Webster said. “We typically in emergency management have some point of reference to work with. Two floods like this — it’s unheard of.”

Scientists say the Earth’s warming climate means more heavy rainfall over short periods of time, and that translates to larger, more ferocious storms on the scale of 2017′s Hurricane Harvey in Texas or 2018′s Hurricane Florence in the Carolinas. Florence dumped six months’ worth of rain on the Carolinas in the course of just a few days.

The growing realization that such events are going to become more common as the result of global warming is forcing Webster and other state officials to revisit how they prepare for and respond to natural disasters.

Late last year, Republican Gov. Henry McMaster created the South Carolina Floodwater Commission to figure out how to better combat flooding unleashed by hurricanes, rising ocean levels and other rain systems upstream that send rivers and creeks over their banks on the way to the Atlantic Ocean.

One thing that local governments must do is use forecast tools that predict several different scenarios based on possible temperature rise, rather than relying on flood maps of the past, when severe inundations were rare, said Larry Larson, a former director and senior policy adviser for the Association of State Floodplain Managers.

They also should be prepared to alter landscapes, divert runoff, and to buy up houses and other private properties that frequently end up under water, and to elevate those buildings if necessary, Larson said.

Property owners are resistant because of the cues they get from weather forecasters and government officials, who still employ such terminology as “100-year” floods. Despite its name, a 100-year flood doesn’t mean once-in-a-lifetime. Instead, it means a level of flooding that has a 1 percent chance of happening in any particular year, said Susan L. Cutter, director of the Hazards and Vulnerability Research Institute at the University of South Carolina.

“People are not really good at understanding probability,” Cutter said.

Dealing with the consequences of natural disasters is daunting even when residents receive advance notice. Emergency officials in Conway, a city of 23,000 about 15 miles (24 kilometers) from the beach, took the map of Hurricane Matthew’s flooding in 2016 and — based on forecasts — drew the lines out a little farther, accurately predicting nearly to a home which ones would flood during Hurricane Florence in September. That gave residents a week or more to get whatever they could out their homes.

Kevin Tovornik was one of them. Tovornik lost his air conditioner and duct work in the 2016 flood. In 2018, he saved his furniture, but still ended up losing the house. For a while, he paid two mortgages: this one and one on a townhome he had to move into 30 miles (48 kilometers) away. To save money, he now lives in an RV in his yard in Conway. He hasn’t been able to start repairs on the house because too much rain has fallen over the past few months for anything to dry out.

Tovornik and his wife don’t want to rebuild. He said he would now have to elevate the house with no guarantee there isn’t another record flood to come on the Waccamaw River, which crested 3.5 feet (1 meter) above the level it reached during Matthew. But at the moment, he can only get back 75 percent of the appraised value of the house through the federal government’s buyback program.

“Where else in South Carolina right now is your house losing that kind of value?” Tovornik said. “It’s hard to get your feet back on the ground. You have so many strikes against you. You have a mortgage on a house that is uninhabitable.”

As they consider how to plan for and react to future weather events, the governor and fellow politically conservative members of the South Carolina Floodwater Commission aren’t quite ready to accept the general consensus among scientists that pollution and other manmade factors are largely to blame for climate change.

The commission’s leader, attorney and environmental professor Tom Mullikin said solving the problem can’t be derailed by what he described as politically charged debates over the cause.

“We are going to deal with the real-time impacts of a climate that has changed throughout all of time,” Mullikin said. “We — the governor — is not entertaining a political conversation.”

Whatever the causes of the extreme weather, meteorologists say it will strike again as it did last year, when more than 100 reporting stations, mostly east of the Mississippi River, recorded more rainfall than at any other time, according to the Southeast Regional Climate Center. Weather experts are also investigating potentially record rainfall in South Carolina and North Carolina last year.

In the summer of 2013, Kwiatek knew a heavy storm was hitting a section of Pickens County in the northern part of the state, but conditions didn’t seem too bad in the middle of the county where she was. And yet, just 15 miles (24 kilometers) away, thousands of plant species collected over decades at Clemson University’s South Carolina Botanical Gardens were being swept away as 8 inches (20 centimeters) of rain fell in a few hours.

“More of those little events are happening. We are learning to be more vigilant,” Kwiatek said.