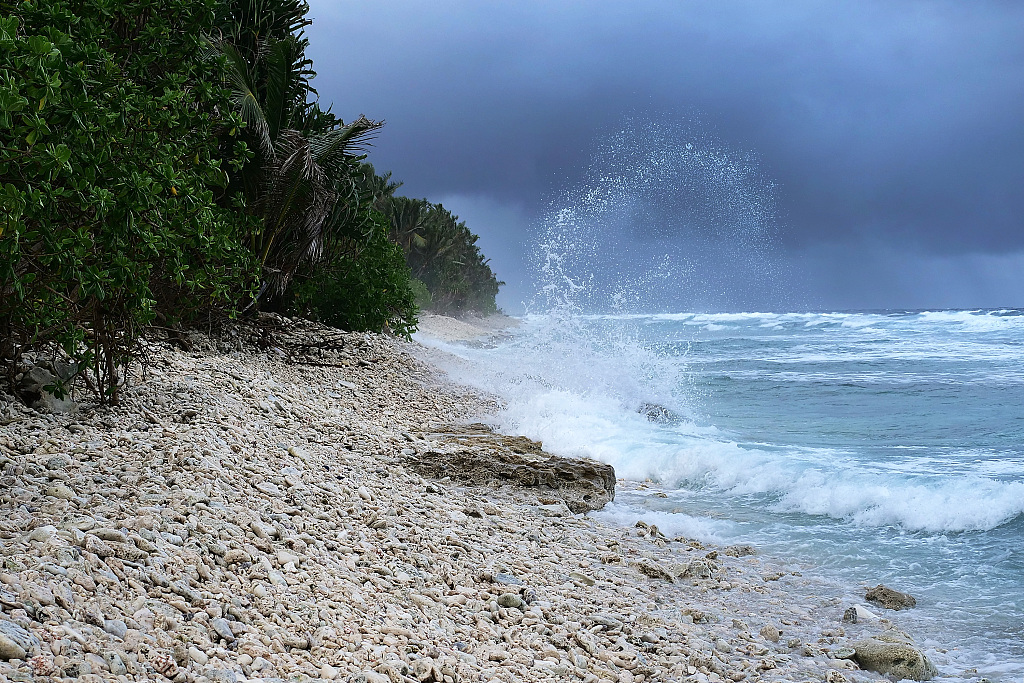 Waves crash on the coral at the southern end of the main island on August 15, 2018 in Funafuti, Tuvalu. (Photo: VCG)

Scattered across millions of square kilometers of ocean, the Pacific islands are home to an estimated 2.3 million people. They speak a myriad of languages, have their own cultures and traditions but, despite their differences, they all face the same uncertain future due to climate change - something they have absolutely no control over.

The tiny Polynesian island of Tuvalu sits midway between Hawaii and Australia. With a population of some 11,000 people, it is one of the smallest countries on the planet with a total land area of less than 26 square km.

Already, two of Tuvalu's nine islands are on the verge of submersion due to climate change, the government says, swallowed by rising seas and coastal erosion.

For Tuvalu it might be too late to save the islands. Scientists say it may take from 50 to 100 years before the sea reclaims them.

United Nations Secretary-General Antonio Guterres recently toured New Zealand and the Pacific island nations of Tuvalu, Vanuatu and Fiji from May 12 to 19 where he saw firsthand how climate change is impacting on the lives of ordinary people. His visit will provide valuable information ahead of the Climate Summit in New York in September.

Visiting Fiji for the first time, Guterres told Pacific leaders attending the Pacific islands Forum in the capital Suva on Wednesday that they were the "frontline of climate change".

In the Pacific specifically, he said sea levels are set to rise in some countries four times above the global average, posing "an existential threat to some island states".

During his meeting with New Zealand Prime Minister Jacinda Ardern earlier, Guterres said: "Climate change is running faster than what we are. We see devastating storms. They are becoming more frequent and with more dramatic humanitarian consequences."

"We are seeing everywhere a clear demonstration that we are not on track to achieve the objectives defined in the Paris Agreement" on climate change, he said.

Patrick Pringle, a research associate with Climate Analytics, a nonprofit climate science and policy institute based in Berlin, told China Daily that climate change is affecting on low-lying islands and reefs across the Pacific in "many different ways".

"Atoll countries like Tuvalu, Tokelau, Marshall Islands and Kiribati are all highly exposed to sea level rise," he said. In countries like Fiji and Samoa, which have mountainous islands, the population and infrastructure tend to be located in low-lying coastal areas.

He said sea level rises are only part of the problem, but it is the part media notices because they are easy to highlight. "These countries rely on imports, especially for food. Their ports and airport sit at sea level, so any rise in sea level impacts on their economies and supply chains."

Imports into these countries are already expensive so any further increases will affect already fragile economies and societies, he said. "They will be impacted directly but also suffer disproportionately from the effects of climate change in other parts of the world."

Pringle said that more intense cyclones were likely. These will dump more rain, resulting in severe flooding, which destroys agriculture and impacts on food security. In contrast, he says, many of the smaller islands and atolls already suffer from drought as they have very limited natural water storage.