Climate is the key issue for G7 summit's last day

The final day of the G7 Summit, in Cornwall, in southwest England, focused on the climate. Extinction Rebellion held a series of protests, while the leaders pledged more money to tackle biodiversity loss. 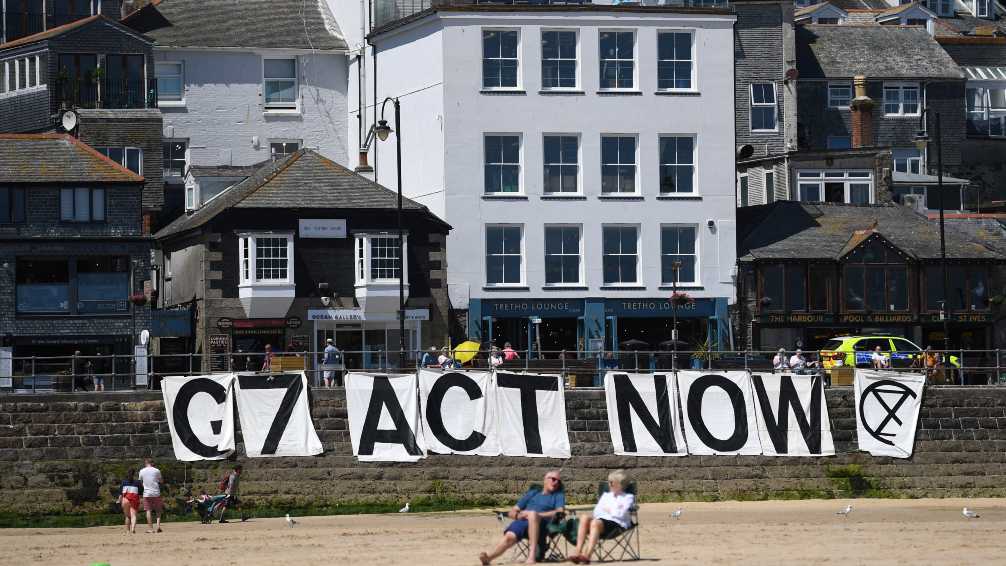 Campaigners have called for more action on climate change from the leaders. (Photo: AFP)

The UK has pledged $700 million to the Blue Planet Fund to protect marine diversity. The name echoes the TV series by world-renowned naturalist David Attenborough.

Along with the UK promise, and Saturday's B3W announcement, the G7 also agreed to a "Nature Compact" treaty, which will hope to reverse biodiversity loss by 2030.

In 2021, about 28 percent of the 134,400 species assessed using the International Union Conversation Nature Red List criteria were listed as threatened with extinction - a total of 37,400 species compared with 16,119 threatened species in 2006.

Launching the plans, UK Prime Minister Boris Johnson said: "Protecting our planet is the most important thing we as leaders can do for our people. There is a direct relationship between reducing emissions, restoring nature, creating jobs, and ensuring long-term economic growth."

In a message to the G7, Attenborough said the coming years were some of "the most important in human history."

"The natural world today is greatly diminished. That is undeniable. Our climate is warming fast. That is beyond doubt. Our societies and nations are unequal and that sadly is plain to see. But the question science forces us to address specifically in 2021 is whether as a result of these intertwined facts we are on the verge of destabilizing the entire planet?" he asked.

"If that is so, then the decisions we make this decade - in particular the decisions made by the most economically advanced nations - are the most important in human history," Attenborough added.

Along with the fund, and the agreement to protect natural habitats, there was also a promise of further reduction in carbon emission levels, this time by 2030.

A key part of the emissions cut will come from a partial ban on coal-burning power plants - and a $2.8bn promise to developing nations to help those nations cut out coal.