Public patience has been wearing thin after weeks of protests by activists of the Extinction Rebellion campaign demanding urgent action by governments around the world to tackle climate change. 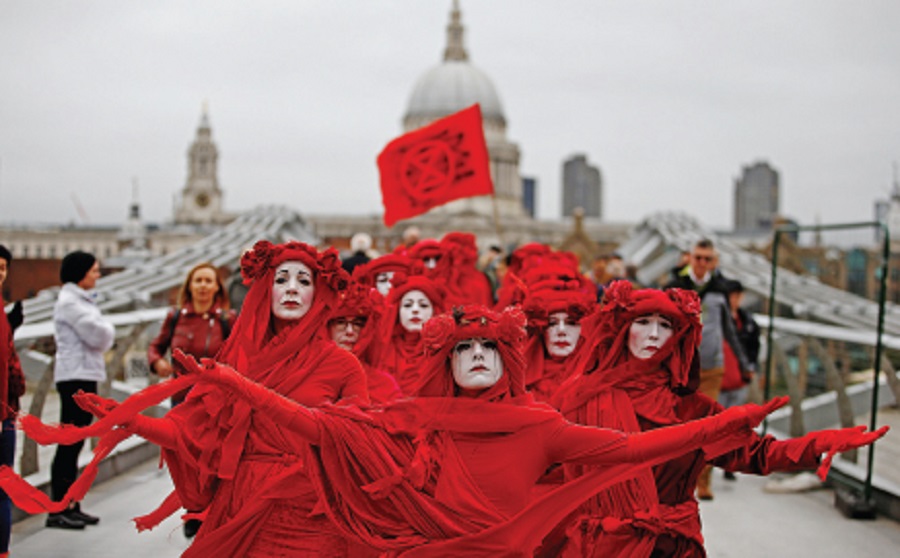 The so-called XR campaign began in early October with demonstrations across Europe and in the United States, Australia and New Zealand, sparking arrests as protestors blocked roads and disrupted public transport.

Activists in the United Kingdom proved the most persistent, despite a police ban on further gatherings in central London after just a week of protests. The ban, justified by the police "in order to prevent serious disruption to the life of the community", was swiftly condemned by the climate change lobby.

The Extinction Rebellion movement was launched to bring public attention to its assertion that time is rapidly running out to save the planet.

However, the nature of some of the protests, in which activists have glued themselves to buildings and trains, has provoked a mixed reaction from the public the movement is trying to influence.

To an extent, the protestors are preaching to the converted. Surveys show that around half the world now believes climate change is a serious problem. In the UK, three in four people now accept that climate change is happening and that human activity is contributing to it.

There has been something of a backlash, however, from commuting workers who have had their travel affected by predominantly youthful protesters who are portrayed by an unsympathetic press as privileged idlers with nothing better to do than disrupt other people's lives.

The Guardian, one of a minority of more sympathetic titles, commented: "The job of a movement such as XR is to be well organized, innovative and eye-catching and keep the climate crisis looming large in the imagination of the public and politicians. On those criteria, it is succeeding."

Others claim, however, that by overstating the scale of the climate threat and failing to acknowledge action that governments are already taking, the movement risks alienating the people with its apocalyptic warnings.

The public backlash spilled over in the UK when some commuters took the law into their own hands and forcibly removed some protestors who had climbed on to the roof of a London underground commuter train.

Spokespeople for the XR campaign responded by acknowledging that it was a mistake to target the transport network at peak hours and promising a rethink of future strategy.

Since the protests began, the climate protesters have faced charges of hypocrisy for not practicing what they preach in terms of their own carbon footprints.

Teenage activist Greta Thunberg, who has built a worldwide reputation for lambasting world leaders for their lack of climate action, has been pilloried from some quarters who challenge her methods and her motives.

There are certainly internal contradictions in the climate campaign that its amorphous leadership should probably address. Some of the celebrities who back the movement might, for example, consider cutting back on their use of private jets.

The activists have also found some strange bedfellows in the course of their protests. In France, they teamed up with the so-called "gilets jaunes", whose populist revolt against the authorities was sparked by opposition to a planned rise in fuel taxes designed to finance a move to green energy.

In the UK, despite the scuffle on the underground and the police ban on demonstrations, the movement and the reaction to it have remained largely good-natured.

However emerging signs of a public backlash have prompted organizers to ponder whether their tactics might actually alienate the very working class allies they are seeking to cultivate. There is a danger they could merely feed the perception that the protestors are out of touch with ordinary people and their day-to-day concerns.

Such protests could force workers to grab a taxi or an Uber. "You know what emits more carbon than public transit and leads to congestion? Taxis … and Ubers," he declared. "So the whole point of shutting down public transit as a climate protest is somewhat self-defeating."

As the demonstrations wind down after the scheduled two weeks of protests-they led to almost 1,800 arrests in London alone-organizers are expected to review their tactics for future action.

The climate crisis will not go away and, irritating as they may be to many people going about their daily lives, neither will the climate change activists.