Ram Bahadur Rayamajhi worked in a furniture shop in India for nearly 15 years but returned to his home village in western Nepal's Pyuthan district several years ago, after suffering from a nerve problem.

With his son unable to find a good job, Rayamajhi had to provide for his household of eight people and took up farming as his main profession.

But the lack of a good water source to irrigate his one hectare of land left him dependent on erratic rainfall to grow his mustard crop, the 65-year-old said. 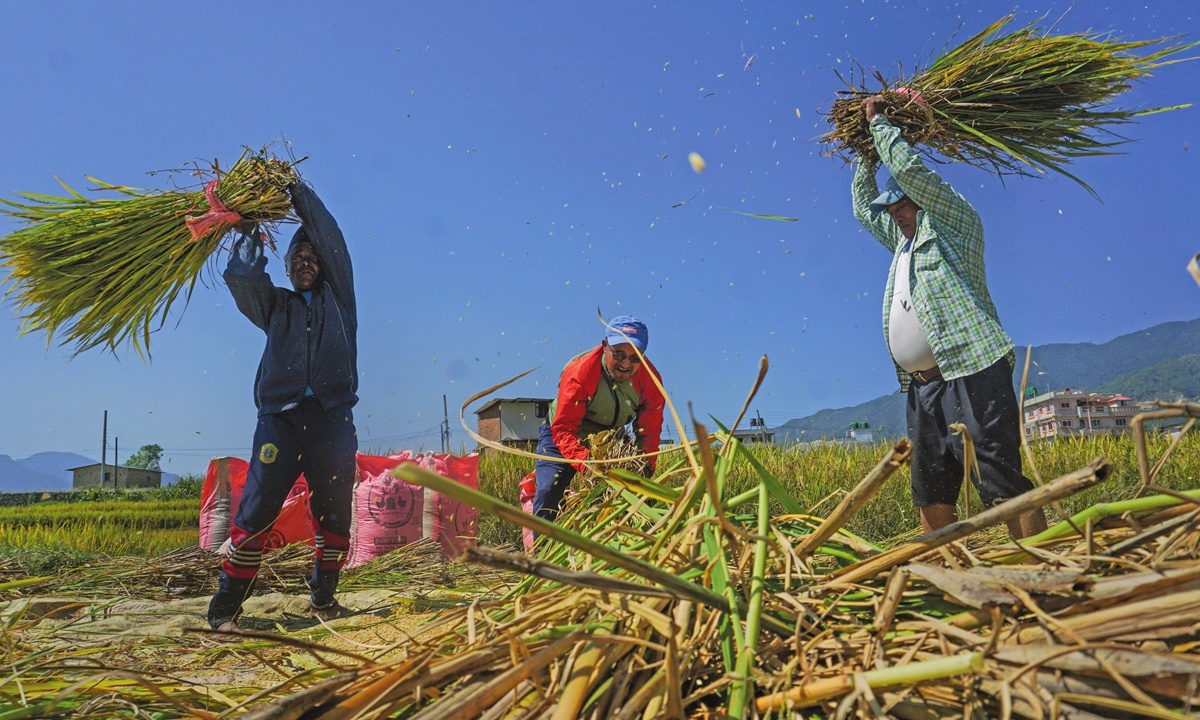 "Sometimes a heavy downpour and hailstones would destroy my field crops, and at other times [they] would fail due to water scarcity," he said.

He also struggled with pests and diseases. As a result of these multiple problems, he ended up farming only half of his land, leaving the rest barren.

That was until two years ago, when the provincial government launched a "smart agriculture" program in his village of Darbhan.

Rayamajhi now irrigates his land from a 75,000 liter tank constructed under the program, filled with water pumped from a borehole using a motor driven by hydroelectric power.

"Due to the continuous supply of water, the crop yield has increased," he added, noting his mustard harvest had almost doubled this season.

"The mustard seed also contains a higher amount of oil due to sufficient irrigation," said the farmer who grows cauliflowers, cabbages and potatoes too.

Plastic tunnels also provided by the program, meanwhile, have helped protect his tomato crop from hail, excess rain and disease.

"The incidence of blight in tomato when planted outside the tunnel was higher than when they are planted inside," he said.

The smart agriculture program funded and managed by the government of Lumbini province is now operating in 116 villages, up from 52 in the first year.

The four-year scheme distributes 5 million Nepalese rupees ($42,700) per year to each village to provide subsidized inputs and services to farmers.

According to Lumbini's ministry of agriculture, up to 20 percent of the budget is used to develop site-specific technologies and practices to help farmers cope with a warming climate.

Mukesh Ramjali, a climate liaison officer with the smart farming program and an agricultural extension officer in Palpa district, said the area had seen higher temperatures and shifting rainfall patterns, with excessively wet or dry periods.

This has increased the incidence of plant diseases, he added, such as false smut in rice and infestations of capsicum. Citrus and millet yields have also fallen, he said.

In response, the program is providing drought-tolerant crop varieties such as Raja-14 rice which requires less water to grow and livestock breeds like the Boer goat, a hybrid that is bred to adapt to local conditions.

An information center equipped with internet access is set up in each village, where farmers can get weather forecasts to guide their work.

They also receive training on the effects of climate change and how they can use technology to adapt, such as soil mulching and rainwater harvesting.

Dhakal said the main aim was to make the villages "climate smart" - which means using eco-friendly methods to thrive in a harsher climate - through increased access to irrigation, markets and use of technology.

The provincial government is now funding the program but plans to hand it over to local municipalities in two years' time, he noted.

To prepare for that, the provincial budget is reduced by a quarter each year, with the spending covered instead by municipalities or farmers' groups, he added.

No need to leave

Dal Bahadur Rayamajhi, another farmer from Darbhan village who oversees the program's implementation there, used to go to India seasonally to work as security guard. But after the smart agriculture scheme was introduced, he took up farming as his main occupation.

"Earlier, although I had sufficient land, I had to buy almost everything from outside," he said.

"But now I earn more than 200,000 rupees in a year selling field produce," said Dal Bahadur Rayamajhi, who is related to Ram Bahadur. "I don't have to go to India anymore."

He has received netting that protects his crops from pests and poly-tunnels to keep off dew, hailstones and heavy rain.

Nearly 60 households in the village have benefited from similar equipment and can use water from two tanks to irrigate.

"About 13 hectares of land that was completely barren in this village is cultivated now after this program was introduced here," said Rayamajhi.

Officer Ramjali said no study had been carried out on whether the smart agriculture program was reducing migration pressures but it had enabled farmers - some of whom had sought work across the border - to make more money from their land.

"At least 10-15 households, which also include returned migrants, in each village have shifted from subsistence farming to commercial farming," he added.