Climb in US cases looking 'inevitable' 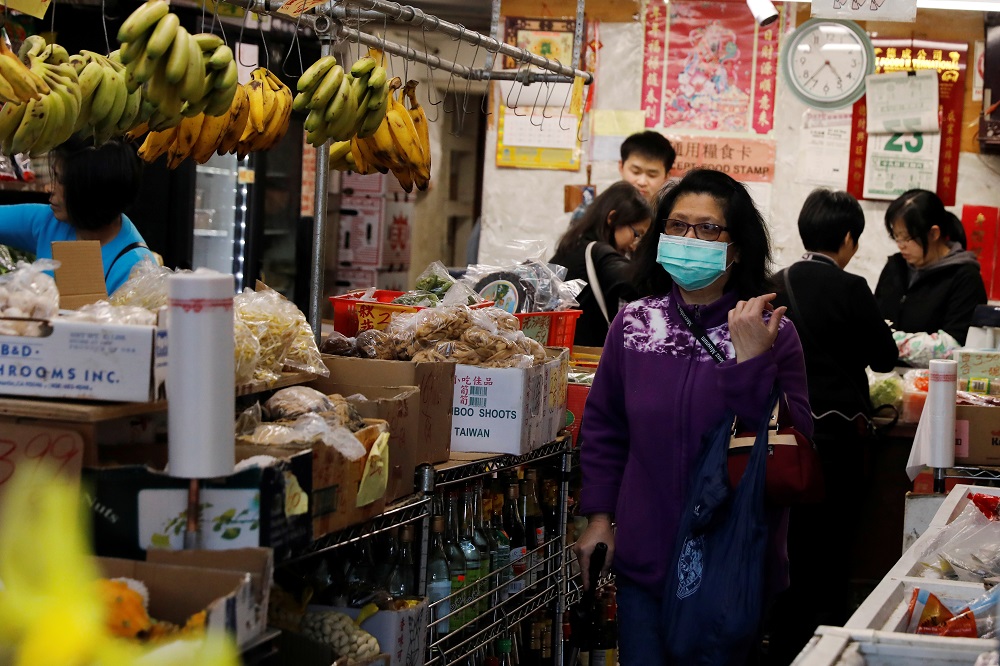 A woman wears a face mask at a market in the Chinatown district of San Francisco, California, on Tuesday. (Photo: Agencies)

With nearly 60 infections logged, residents told to brace for more

US health officials have heightened their alert against the novel coronavirus, calling on US citizens to increase their readiness and brace for an "inevitable" run-up in the number of infections in the country.

Messonnier's remarks came as the CDC said the number of novel coronavirus cases in the United States jumped to 57 as of Tuesday. That includes 14 who either traveled to China or were close relatives of travelers; three US citizens repatriated from Wuhan, the epicenter of the outbreak in China; and 40 passengers returned home from the cruise ship Diamond Princess, which was quarantined in Japan.

"We are asking the American public to prepare for the expectation that this might be bad," she said.

She said that cities and towns should plan for "social-distancing measures", like dividing school classes into smaller groups of students or closing schools altogether. Meetings and conferences may have to be canceled, she said. Businesses should arrange for employees to work from home.

Also on Tuesday, Alexander Azar, secretary of US Health and Human Services, or HHS, said at a news conference that the community transmission in a number of countries－including outside Asia－is "deeply concerning", which makes "successful containment at our borders harder and harder".

"We cannot hermetically seal off the United States to a virus, and we need to be realistic about that," Azar said.

On Tuesday, during a trip to India, US President Donald Trump predicted that the novel coronavirus is "going to go away", while also expressing confidence that the epidemic will not seriously harm the global economy.

But at a HHS budget hearing, Republican Senator Richard Shelby said he is concerned that the Trump administration is "lowballing" its request for emergency coronavirus funding and that he will recommend a higher number.

Shelby, chairman of the Senate Appropriations Committee, said: "It seems to me at the outset that this request for the money, the supplemental, is lowballing it, possibly, and you can't afford to do that. If you lowball something like this, you'll pay for it later."

Shelby told reporters afterward he doesn't have a new number in mind but that it will be higher than the $2.5 billion requested by HHS.

Vaccine on the way

In a recent report, The Wall Street Journal said that a rapidly developed coronavirus vaccine by drugmaker Moderna and NIAID will be tested on 20 to 25 healthy human volunteers in the US in April, in a bid to determine whether two doses will be safe and generate an immune response to protect against infection. The results would be available in July or August, the report said.

The US National Institutes of Health, or NIH, announced on Tuesday that the first clinical trial testing of Gilead Sciences' antiviral drug remdesivir in a hospitalized patient with the coronavirus has started, according to Reuters.

The participant is a US citizen who was repatriated after being quarantined in Japan aboard the Diamond Princess and is being conducted at the University of Nebraska Medical Center in Omaha, the NIH said.

The World Health Organization said on Monday that remdesivir is showing signs of helping to treat the coronavirus.

A successful trial of Moderna's vaccine－mRNA-1273－would be followed by further studies and regulatory stages, said Anthony Fauci, director of the National Institute of Allergy and Infectious Diseases under the NIH, meaning a coronavirus vaccine would not be ready for widespread distribution until at least next year.

Referring to the speed of the drug's development and expected clinical trial, Fauci said it is "unquestionably the world indoor record. Nothing has ever gone that fast".

However, it's uncertain whether the drug will work, considering that the gene-based technology it uses hasn't yet resulted in an approved human vaccine.