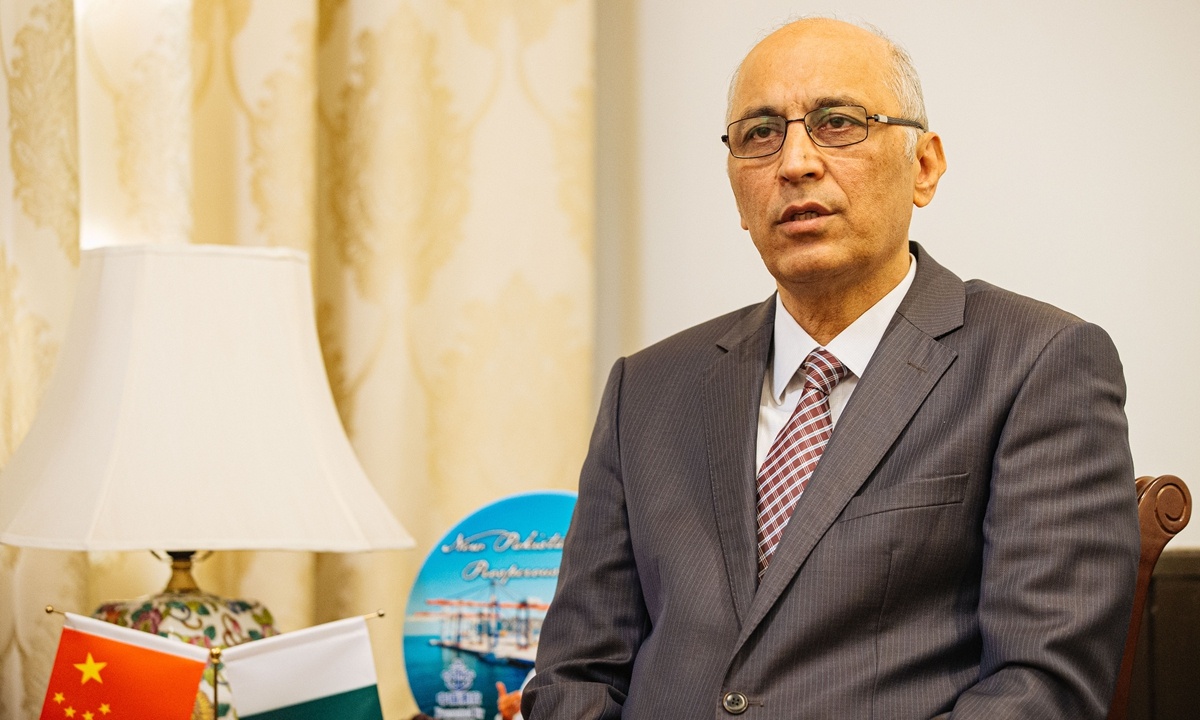 China and Pakistan have a long history of interaction and people-to-people exchanges, helping foster their relationship and mutual understanding in a variety of cultural sectors, said the Pakistani Ambassador to China. The two neighbors are getting closer than ever, from arts and culture, infrastructure and poverty alleviation to cooperation in regional security.

Friday sees the release of Parwaaz Hai Junoon, the first Pakistani film to hit Chinese mainland theaters in decades. Ambassador Moin ul Haque told the Global Times in an exclusive interview that he expects the movie to be warmly welcomed by Chinese audiences.

Ahead of the 70th anniversary of the establishment of diplomatic ties between China and Pakistan in 2021, Parwaaz Hai Junoon - a Pakistani romantic war movie made in 2018 - is scheduled to hit Chinese cinemas on Friday.

"Parwaaz Hai Junoon is one of the most popular and highest-grossing movies to be made in Pakistan, which had done very well in box office in Pakistan and across the world," said Haque. "So we are very happy that it has become one of the first movies after a gap of almost 40 years to be screened in China, and would like to thank Fire International Media for its role in screening of the movie."

"The movie is a tribute to Pakistan Air Force. It's a bit of action, drama, romance, comedy, and I hope that people in China like it as well," said the envoy.

He mentioned the two countries are also planning joint production in the film industry. "So this movie will be a trailblazer and a starting point for such a cooperation."

The ambassador said there is a long history of interactions between people living in China and Pakistan. "So after our two countries became independent, this history and cultural affinity brought them closer and closer to each other," he said, mentioning the two sides signed their first cultural cooperation agreement in 1965.

"Since then, we had numerous events between Pakistan and China in the fields of art, festivals, sports, literature, and music. We have also established a number of sister cities and sister provinces between the two sides," said Haque. "We are also planning a number of cultural activities to celebrate the 70th anniversary of the establishment of our ties in 2021."

"Cultural and people-to-people exchanges between the two countries help foster their relationship and mutual understanding," he said. "We have also set up Pakistan study centers in a number of Chinese universities, and similarly, there are also Confucius Institutes in Pakistan which are teaching Chinese language and history."

According to the ambassador, China is the top overseas destination for Pakistani students, 28,000 of whom are studying in China.

The movie also highlights a JF-17, a fourth-generation fighter jointly developed by China and Pakistan. In the movie, a teacher at the air force academy asks students to compare the JF-17 with Mirage 2000, a French multirole, single-engine fourth-generation jet fighter, in class. A student answers that the JF-17 has three advantages, including flexibility and safety.

According to a report by Jane's Information Group, China and Pakistan have launched production of a new variant of the JF-17B "Thunder" multi-role combat jet, to be inducted into the Pakistan Air Force by April 2021 to enhance its operational capabilities.

"JF-17B 'Thunder' fighter jet is a joint production between Pakistan and China, and a symbol of great close friendship and partnership of the two countries," said the ambassador. "Now the two countries are working for the next generation fighter jet."

He stressed that China and Pakistan are two important and responsible members of the international community, and adhere to the principles and purposes of the UN Charter.

"We have been contributing to the international community and maintaining global peace and security. We believe in the respect for sovereignty, non-aggression, and non-interference in each other's internal affairs. We believe in multilateralism and resolving disputes through peaceful means," said Haque.

Deeper and closer China-Pakistan relations have also helped them cooperate in other fields, including infrastructure, transportation, economic development and poverty alleviation, as well as regional peace and stability.

Pakistan's first metro line, built by Guangzhou Metro Company, opened on October 25 in Lahore. It will be jointly operated by Chinese and Pakistani companies.

Haque said the metro line is an extremely important project under the China-Pakistan Economic Corridor (CPEC) that will provide a modern, efficient, and affordable transport services to the people of Lahore, a metropolis of 12 million people with serious traffic congestion. The line will also help reduce carbon emissions and air pollution in the city as more people use it to commute.

The envoy noted that China and Pakistan are discussing and working on many other transportation projects under the framework of CPEC in other major cities, including Karachi, capital of Sindh province, and Quetta, capital of Balochistan.

He said the CPEC, in its first phase, focuses on infrastructure and energy development, referencing Gwadar Port projects in southwestern Pakistan under the BRI. The port "will enhance connectivity between our two countries and the rest of the world," said Haque.

In the second phase, the CPEC will mainly concentrate on the areas of agriculture, science and technology, and vocational training, which are very important for Pakistan's poverty alleviation, and economic and social development, said the ambassador.

"By learning China's experience, we are building a number of special economic zones across the country, which will provide opportunities for investors from China and other countries," he said.