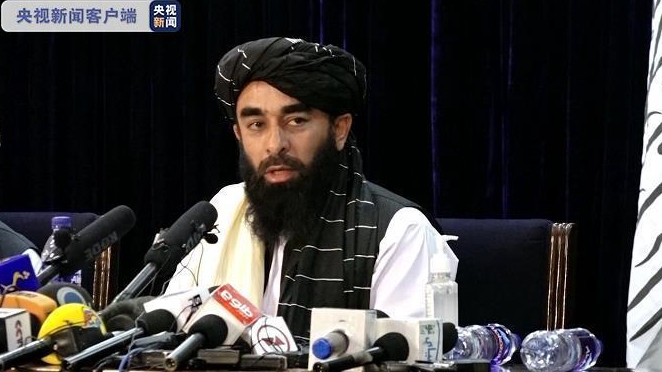 The press conference began almost 40 minutes after the scheduled start time of 6:30 p.m.

Journalists from Western countries were in attendance, but there were no microphones from Western media outlets on the podium as Mujahid spoke, CMG reporters said.

As Mujahid took his seat, which formerly belonged to Dawa Khan Menapal – the head of the Afghan government's media and information center who was assassinated by the Taliban earlier this month – it marked the first time he had revealed his face to the public.

The world had heard Mujahid's voice for many years, since he sometimes called reporters, but he rarely appeared in front of the camera.

Though he often spoke in Afghanistan's official language Pashto, his reactions during the press conference showed he has an understanding of English.

Mujahid repeated "one" during the press conference to remind reporters that each of them could only ask one question, though he didn't answer questions in English.

Besides, Mujahid repeated at least four times during the press conference that media from countries outside Afghanistan should be given more chances to ask questions.

The spokesperson reacted quickly and actively when answering questions, CMG reporters said, but his answers showed that the Taliban were not fully prepared, as they had taken control of the country so quickly. Also, he was somewhat vague when asked about women's rights under Taliban rule, saying the group will allow women in the country to work and study based on Islamic law.

When an Afghan reporter asked the spokesperson his thoughts on Menapal's death, Mujahid hesitated a bit but calmed immediately, saying: "Families of Taliban members have also suffered disasters. It's unfortunate, but it's part of war."