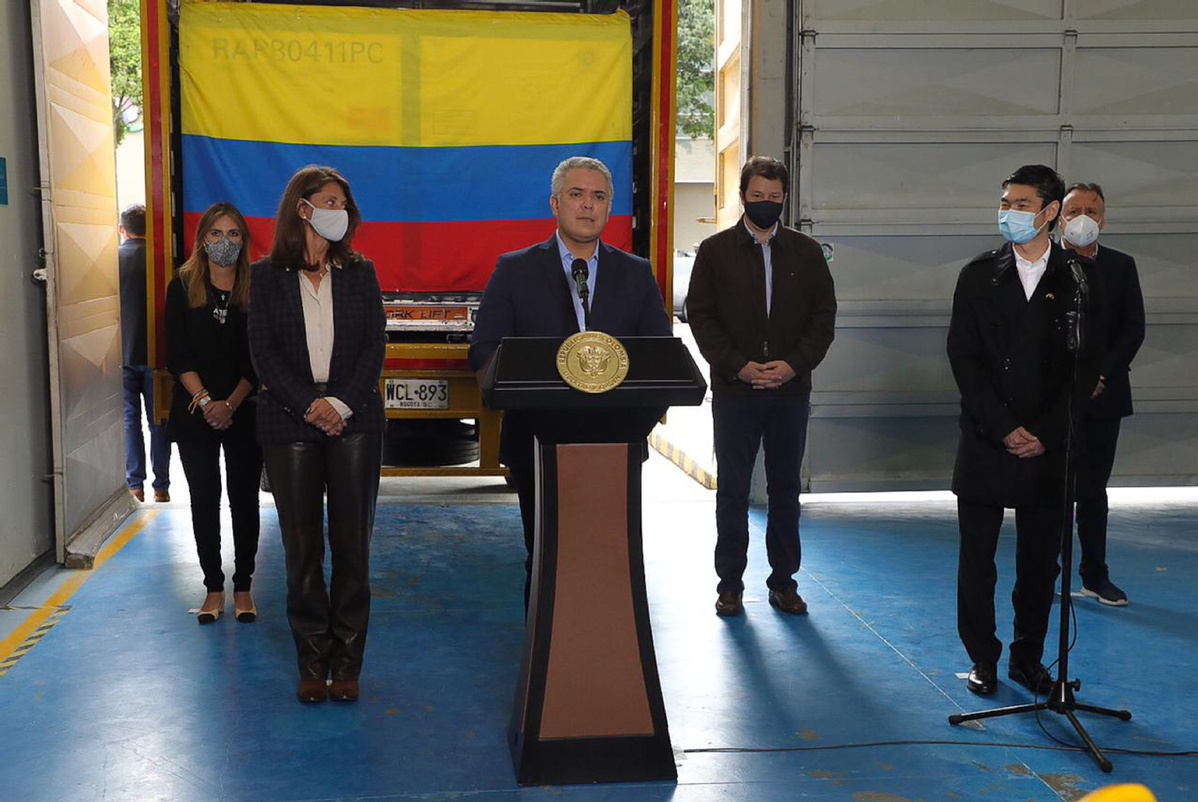 Colombia and Mexico welcomed the arrival of their first batches of a Chinese-developed vaccine against COVID-19 over the weekend.

In Colombia, the arrival of 192,000 doses was greeted with the highest-grade reception at Bogota airport on Saturday, with Colombian President Ivan Duque and Vice-President Marta-Lucia Ramirez among the officials present.

Duque expressed his delight that more vaccines had arrived and voiced his appreciation for China's support to Colombia in fighting the coronavirus.

He said the vaccines will be "deployed throughout the national territory" including remote regions such as the Amazon.

China's Ambassador to Colombia, Lan Hu, also on hand for the arrival of the Sinovac shipment, welcome its arrival.

Lan said the fight against the pandemic "has been the priority" of bilateral relations since last year and that the arrival of the vaccine represents an opportunity to help the country return to normality.

"We hope that this vaccine, as a global public good, can play a more positive role in this battle, in this fight, in this national vaccination plan to save more lives and to restore normality to our socioeconomic life as soon as possible."

Duque said the cooperation between the two countries is yielding more and more fruit as well as greater mutual trust.

Colombia's National Food and Drug Surveillance Institute approved the emergency use of CoronaVac in early February.

Part of the batch that arrived on Saturday will be sent to the 48,000 inhabitants of Leticia, the capital of Colombia's administrative department of the Amazon. The area has been hit hard by a strain of SARS-CoV-2－the virus that causes COVID-19－first found in South America. The strain, known as P.1, caused large outbreaks of infections in cities such as Manaus, on the Brazilian side of the Amazon jungle.

Mass vaccination against COVID-19 began on Thursday in major hospitals in Bogota and other cities. Under Colombia's national vaccination plan, healthcare workers and older people are among the first groups being immunized. Leticia skips the national queue in an effort to cut the spread of the P.1 strain of the virus in that area.

On Saturday, Mexico received its first shipment of 200,000 doses of CoronaVac. A batch of Russia's Sputnik V vaccine is expected by Monday.

Health officials earlier said the first shipments of the Chinese and Russian vaccines would be used in low-income neighborhoods of Mexico City and its suburbs.

Mexico is currently using vaccines from Pfizer and AstraZeneca and has administered almost 1.6 million doses of those.

The country will now be faced with the logistical challenge of handling four vaccines, all of which require two doses.

On Saturday, Mexican Assistant Health Secretary Hugo Lopez-Gatell tweeted that he had light COVID-19 symptoms on Friday night. He was awaiting the results of a PCR test.