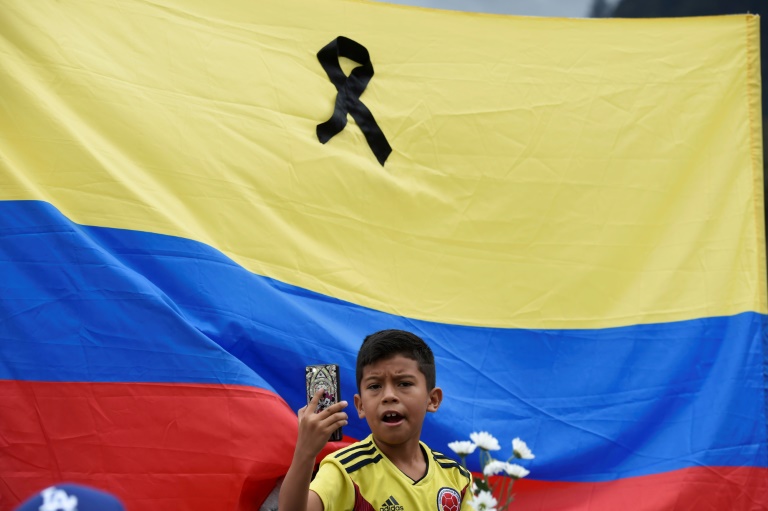 Thousands of people marched throughout Colombia on Sunday to condemn the car bombing, the deadliest attack with explosives in the city of Bogata since 2003. (Photo: AFP)

Colombia's leftist ELN rebels claimed responsibility on Monday for the bombing of a police academy in Bogota that killed 20 people as well as the attacker, and derailed peace talks being held in Havana.

The National Liberation Army said Thursday's car bombing, which sparked nationwide protests, was a retaliatory attack after the government of President Ivan Duque failed to respect a unilateral ceasefire declared by the rebels over Christmas.

"The operation carried out against these installations and troops is lawful within the law of war, there were no non-combatant victims," the ELN said in a statement on its website.

It added that the academy was a military installation where cadets received training to become intelligence operatives and conduct military operations.

"The president did not respect the gesture of peace" and "his response was to carry out military attacks against us," it said.

Specifically, the ELN said Colombian troops bombed a camp on December 25, affecting a family of peasants who were nearby.

"It is then very disproportionate that, while the government is attacking us, we cannot respond in self-defense," the statement added.

The attack was a major setback to two years of peace talks with the National Liberation Army (ELN) -- first hosted by Ecuador and currently by Cuba. They failed to go beyond the exploratory stage before stalling when Duque took power in August 2018.

In its wake, Duque announced that he was reinstating arrest warrants for 10 ELN members who are part of the group's delegation to the Cuba talks and said he was revoking "the resolution creating the conditions that allow their stay in that country."

Cuba was quick to distance itself from the attack.

"Cuba has never allowed, nor will ever allow its territory to be used to organize terrorist attacks against any state," said Foreign Minister Bruno Rodriguez in a tweet.

Thousands of people marched throughout Colombia on Sunday to condemn the car bombing, the deadliest attack with explosives in Bogota since 2003.

Protests were held in several cities around the country, with marchers in white waving Colombian flags and chanting slogans like "cowardly killers" and "life is sacred."

The peace talks had been aimed at ending more than five decades of insurgency by the Marxist-inspired guerrillas.

Colombia has experienced relative calm since the 2016 peace accord signed by then-president Santos and the Revolutionary Armed Forces of Colombia (FARC) guerrillas.

With the landmark agreement turning the former rebels into a political party, the smaller National Liberation Army is considered the last active rebel group in the country.