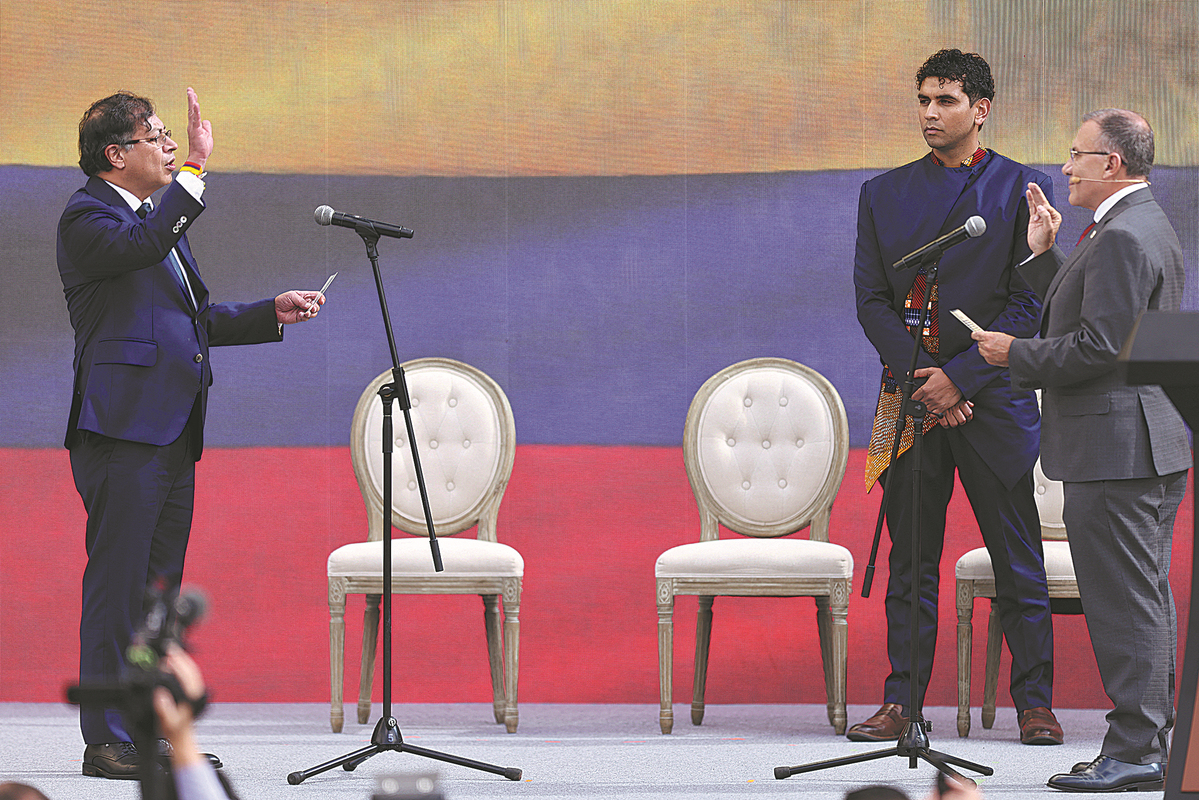 Gustavo Petro (left) is sworn in as Colombian president in Bogota on Sunday. (Photo: China Daily)

Colombia's new president, Gustavo Petro, has pledged to unite the country after being sworn in before about 100,000 people in Bogota on Sunday.

Petro, a former congressman and mayor of the national capital, will for the next four years oversee a highly divided country facing significant political and economic challenges.

"The challenges and tests that we have as a nation demand a period of unity and basic consensus," he said in his first speech as president.

During his campaign, he promised significant social and economic changes for the Latin American country, including overhauling the social security and pension schemes, putting an end to oil exploration, and resuming diplomatic relations with Nicolas Maduro's government in Venezuela. He won the presidential election in June.

Petro's administration is also expected to implement a foreign policy that will maintain good relationships with China, Russia and Iran.

"Regarding the relationship with China, the new government has said that they expect the relationship to be further strengthened in the next four years, and to be extended to other issues, such as rural development and cooperation in the energy transition," said David Castrillon, a research professor in international relations at the Externado University of Colombia.

"We hope that this will be a government that will continue the friendly and long-standing relations with the US, but that Colombia will put its national interests first on certain issues, even (if that means) saying no to some US positions.

"This is the case with the reestablishment of relations with the government of Nicolas Maduro and the improvement in relations with governments that the US considers undemocratic in the region, such as Cuba and Nicaragua."

Castrillon said the new administration will also strengthen diplomatic and economic ties with countries in the Global South.

"We believe that this will be a government that will begin to take the African continent seriously," Castrillon said. "This will mean opening new diplomatic missions on the continent and engaging in discussions with the African and Asian continents, building on the identity of the countries of the Global South, which, like China, face similar challenges and have a reason to work together to address them."

Petro is also expected to try to reposition Colombia in the region. As a first step, he will reestablish diplomatic ties with Venezuela before turning the country toward other Latin American nations.

Domestically, Petro will face enormous challenges delivering the deep changes he promised during the campaign.

One of the most urgent matters is fiscal reform. The new government hopes to collect about 50 billion Colombian pesos ($11 billion) by raising tariffs and expanding the tax base.

"Taxes will not be confiscatory; they will simply be fair in a country that must recognize as an aberration the enormous social inequality in which we live, in a state that must protect transparency in spending and in a society that deserves to live in peace," Petro said in his inauguration speech.

During the election campaign, Petro said Colombia would embrace new sources of energy and shift the economy toward tourism and alternative sources of income.