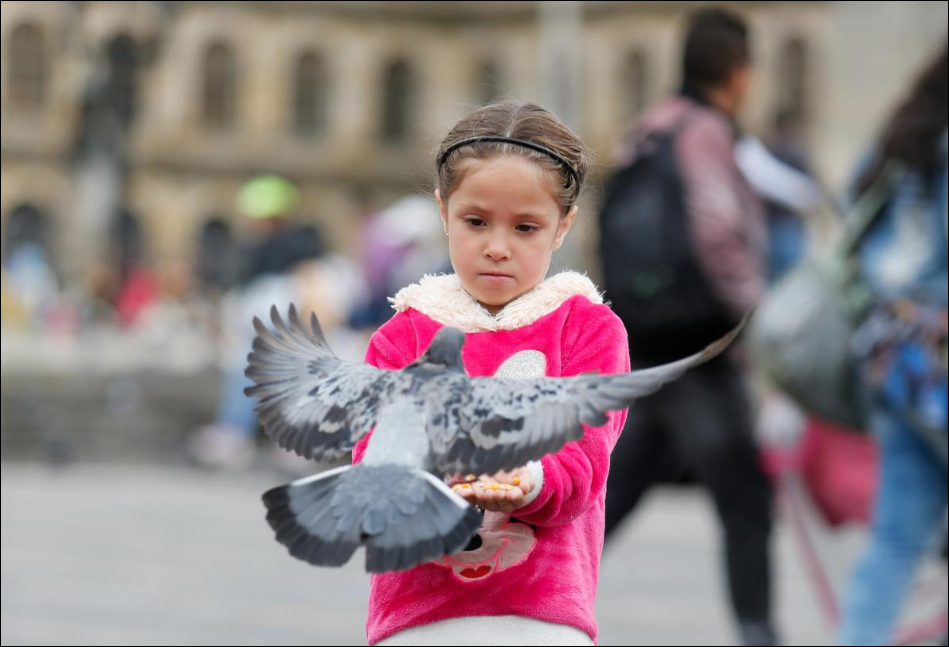 A girl feeds pigeons at Bolivar Square in Bogota, ahead of the second round of presidential election in Colombia June 13, 2018. (Photo: Reuters)

Colombians will choose either a business-friendly protégé of a powerful ex-president or a leftist former guerrilla as their new head of state on Sunday, with the future of a historic peace accord and the nation’s economic model hanging in the balance.

Ivan Duque, hand-picked by former hardline president Alvaro Uribe, is predicted to win Sunday’s runoff as he is polling about 20 points ahead of Gustavo Petro, a former mayor of Bogota and one-time member of the now-defunct M19 rebel group.

At stake is the implementation of a 2016 peace agreement with the Revolutionary Armed Forces of Colombia (FARC), which brought an end to five decades of conflict with the Marxist rebel group, and whether Latin America’s fourth-largest economy will abandon its traditionally market-friendly posture.

“A Duque victory wouldn’t mean the end of the peace agreement, but it could mean it’s reduced to a minimum,” said Yann Basset of Rosario University. “A Petro victory would probably mean a difficult period of economic uncertainty.”

The 41-year-old Duque made a name as senator for his staunch opposition to the peace deal negotiated by outgoing President Juan Manuel Santos, who once counted Uribe among his backers before falling out with him over the talks.

Duque has promised changes to the accord, which he slams as far too lenient on former rebels. His pledge to jail commanders for war crimes has sparked concern among some Colombians that he could upset the deal and send fighters back to the trenches.

Petro has criticized the deal as not resolving deep rural inequality but says he will keep it intact.

It remains to be seen what changes, if any, Duque can make to the deal, which was upheld by the constitutional court.

Whoever takes office as president on Aug. 7 faces a tough time.

The $320 billion economy remains weak, a new wave of drug trafficking crime gangs have moved into areas once controlled by the FARC and almost a million Venezuelan migrants have crossed into Colombia, looking for food and work.

Though he was never a combatant, Petro belonged to the M19 urban rebel group, which demobilized in 1990. He has been hailed as an example of how ex-rebels can transition to politics but his tenure as mayor was criticized and he failed to win over Bogota voters in the May 27 first round.

He was ousted from office for allowing garbage to pile on Bogota’s streets when he was mayor, before being reinstated.

“He was a very bad leader. Bogota was too big for him to govern; the whole country would be too,” said Fidel Hernandez, 43, standing outside a Bogota bicycle shop where he works.

His opponents accuse him of wanting to turn Colombia into socialist Venezuela, which is suffering a punishing economic crisis. The 58-year-old denies his plans to redistribute land amounts to expropriation and says power has remained too long in the hands of elites.

Petro would likely struggle to get his policies through a conservative congress.

Duque, who worked at the Inter-American Development Bank until 2014, is considered by some to be too inexperienced and beholden to Uribe.

The former president is loved and hated in equal measure by millions who either believe he safeguarded Colombians by crushing the FARC or supported right-wing paramilitary death squads that killed thousands.

“Duque is counseled by Uribe. He’s his puppet,” said deliveryman Francisco Roballo, 50, who plans to vote for Petro.

Colombia may struggle to maintain its prized investment grade credit rating whoever wins.

Petro’s pledges to hike taxes on the rich and raise social spending have unsettled investors but there are concerns that Duque’s agenda of cutting taxes could also worsen the deficit.

Duque has promised policies friendly to the oil and mining industries, Colombia’s top exporters, in a bid to revive production. Petro wants to ban open-pit gold mining and not renew coal contracts, as well as transition state-run oil company Ecopetrol to renewables.