Nineteen of the 24 victims in a fatal tourist bus crash in Ecuador were Colombian, the government confirmed on Wednesday.

Fourteen of the deceased Colombian victims have been identified, the country's foreign ministry said. 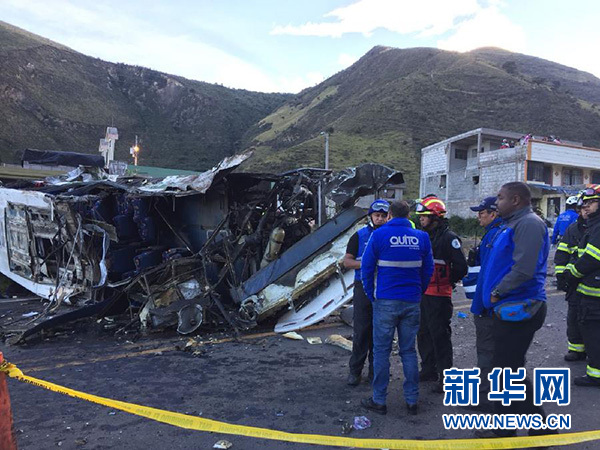 The identities of four Venezuelans and two Ecuadorians have also been determined.

"Once all the bodies have been identified," the Colombians will be repatriated, Bogota's attorney general's office said in a statement.

The crash near Quito, believed to have been caused by a brake failure, also left 22 people injured, including 12 Colombians, Bogota's foreign ministry said.

The bus, which had foreign license plates, overturned and crashed into three houses after a collision with an all-terrain vehicle.

Ecuador transport colonel Julio Barba said the driver "probably overused the brakes... which produced an overheating of the brake system leading to a loss of control of the vehicle."

Three of the four Ecuadorians in the all-terrain vehicle were among the dead, which included three children.

Colombia's Transport Ministry had said on Tuesday that the bus was not authorized to carry tourists.

One of the two drivers, who was injured in the crash, has been arrested.

Traffic accidents are among the leading causes of death in Ecuador. According to the watchdog group Justicia Vial, on average seven people are killed and some 80 people injured each day in traffic accidents.

And 96 percent of those accidents are due to human error, according to the group's figures.

On Sunday, 12 people were killed and 30 injured when a bus carrying fans of Barcelona SC, Ecuador's most popular football club based in Guayaquil, ran off the highway and flipped.