Thousands of Japanese companies began distributing COVID-19 vaccines to workers and their families Monday in an employer-led drive reaching more than 13 million people that aims to rev up the nation's slow vaccine rollout. 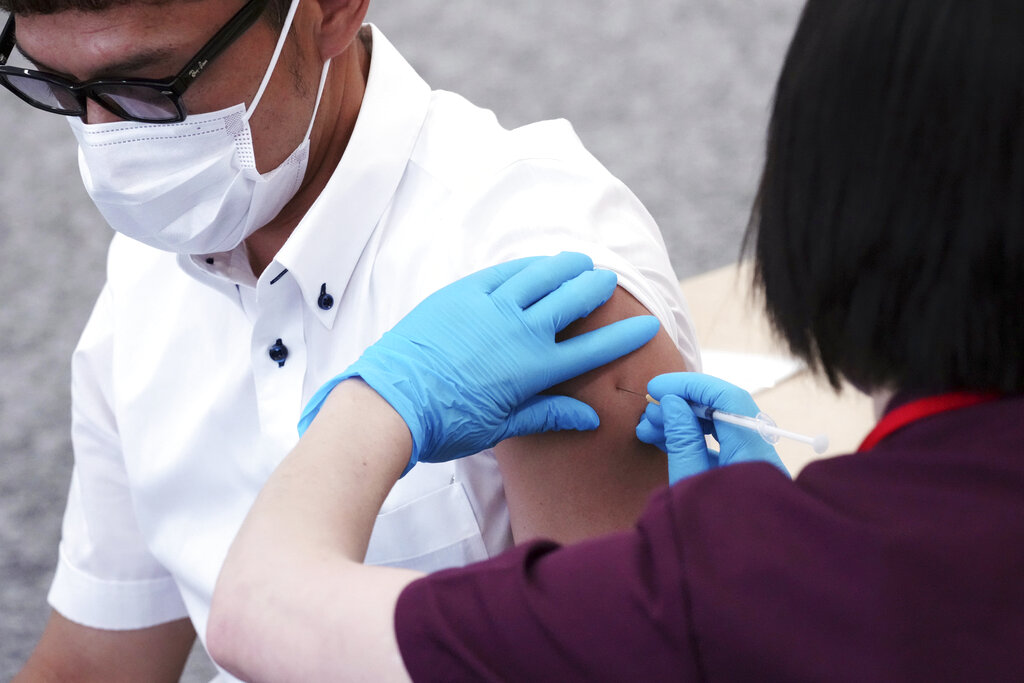 An employee of beverage maker Suntory takes a Moderna COVID-19 vaccine shot at their office building as the company began its workplace vaccination Monday, June 21, 2021, in Tokyo. (Photo: AP)

Yuka Daimaru, among the Suntory workers getting the shot on a sprawling office floor, was visibly relieved after spending more than a year worrying about the coronavirus.

“I was nervous, but it didn’t hurt as much as I thought it would,” she said. “Now I don’t have to worry as much on commuter trains or at meetings.”

The Tokyo-based beverage maker plans to inoculate 51,500 people, including part-time workers and employees’ families, with the Moderna vaccine.

About 3,500 companies have signed up for the free vaccines, and that number is growing. The companies must present a plan to inoculate at least 1,000 people per site. But they decide whom to include, such as families, affiliate companies and suppliers.

Universities are also eligible. Smaller companies can apply through organizations, such as the local merchant association, so ideally no one falls through the cracks, according to the health ministry.

Among those taking part are major automaker Toyota Motor Corp., planning to vaccinate 80,000 people at its plants and offices.

Fast Retailing, behind the Uniqlo clothing chain, is inoculating 18,500 people, including part-timers and cleaning and cafeteria staff, starting July 1.

Company applications for the vaccines are accepted through February 2022.

Japan is relying totally on imported vaccines for a campaign that started in February with medical professionals. Only about 6% of Japanese are fully vaccinated. Japan has had more than 14,000 deaths from COVID-19.

Local governments and Japan's self-defense forces are also leading the vaccination campaign, but the employer-led efforts are helping accelerate the pace.

Daisuke Sen, a human resources senior general manager at Suntory Holdings, said the vaccinations at his company will be completed by the end of August.

The first day for the vaccinations came after weeks of work, especially scrambling to find doctors and nurses to carry out the shots, he said.

“Getting here means so much for me,” he said.