European capitals on Thursday welcomed the trade truce announced by the EU and US but doubts lingered over its feasibility and the changing moods of President Donald Trump. 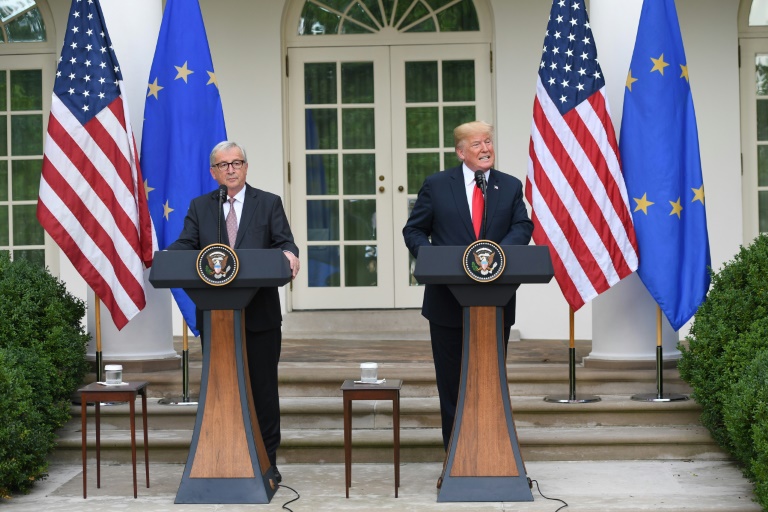 Trump and European Commission chief Jean-Claude Juncker on Wednesday announced a plan to defuse a lingering trade row, that in effect saw Washington back off a threat of auto tariffs against Europe, at least for now.

Germany unsurprisingly hailed the decision, given their world dominating auto industry was the first in line to be punished by Trump's protectionist offensive.

But France quickly spoke out in anger, with Finance Minister Bruno Le Maire demanding "clarifications" over the agreed measures.

Critics of the agreement were especially miffed that existing steel and aluminium tariffs will remain in place despite the White House meeting.

"A good business discussion can only be conducted on a clear basis and cannot be conducted under pressure," said Le Maire.

These comments contrasted greatly with comments out of Berlin, where the spokesman for Chancelor Angela Merkel welcomed the "constructive" meeting.

The details of the deal in Washington remained vague, with a statement mentioning that the transatlantic allies would "launch a new phase" in the relationship.

The would prioritise "to work together towards zero tariffs, zero non-tariff barriers, and zero subsidies on non-auto industrial goods," a statement said.

In addition, the EU has made a commitment to buy US soybeans and natural gas, though how the EU could deliver that pledge remained unclear.

"Did Juncker make a commitment to US on market access to the US on soybeans? That would be very worrisome, that would be rewarding Trump threats on tariffs," said Rem Korteweg, head of the Europe in the World unit at think-tank Clingendael.

France's Le Maire singled out this pledge as especially problematic, given deep concerns over the GMO's in US soybean production that falls foul of EU norms.

France will insist that agricultural goods "remain outside the scope of the discussions" ensuring that "Europe will not compromise with its standards," he said.

"These possible negotiations will not concern agricultural goods, there may be some reference to soybeans," an EU official said on condition of anonymity, adding that the increased imports were already reflected on the market.

The condition for the deal was that Trump hold off on slapping tariffs on auto imports.

Trump had previously ordered the Department of Commerce to look into charging border taxes of up to 25 percent on vehicles from the EU and it was yet unknown if the US would close the process.

Trump also won a commitment to work together to reform the World Trade Organization. He has long complained that the WTO has been unfair to the United States, despite the fact the US has won most of the disputes against others.

The US and EU account for about $1 trillion in transatlantic trade, and tensions spiked leading up to Wednesday's high-stakes talks.

EU Trade Commissioner Cecilia Malmstrom, who accompanied Juncker, hailed the agreement and said on Twitter that she "will be working hard to take this work forward the coming months."