ADDIS ABABA, Aug. 6 (Xinhua) -- Fozia Ismael, 22, is one of 17 vibrant young Ethiopian students who are presently pursuing their third-year Chinese language studies at the Confucius Institute at Addis Ababa University in the Ethiopian capital. 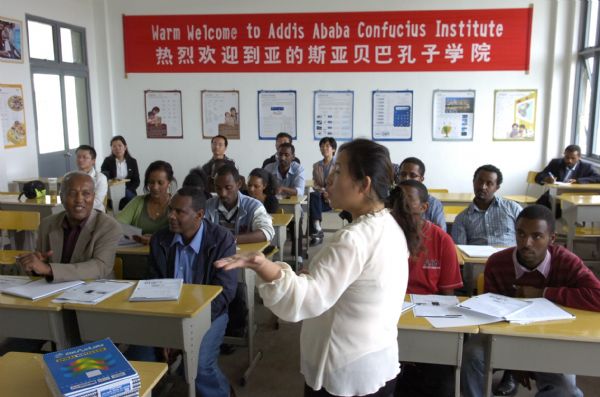 Ismael, who is now awaiting her graduation slated for September this year, attributed her personal interest and lucrative job opportunities behind her inclination to studying Mandarin.

"Most of us have the economic (advantage) in common. Of course, studying the Chinese language also helps us to develop ourselves and explore the world as well," she told Xinhua recently after attending a Chinese culture lecture by He Yang, a translator and member of the 22nd batch of Chinese medical team to Ethiopia.

Ismael emphasized language as the key to understanding another culture, as she encouraged more and more young Ethiopians to study Mandarin amid China's rising importance in Ethiopia and elsewhere in the international stage.

"I studied not only the Chinese language, I also studied the culture as well. I found it (Chinese culture) more unique than ours, and their food and how they eat it. Their culture is so impressive," she added.

Courtesy of the everblooming Sino-Ethiopian ties, the interest in studying Chinese language is growing fast with newly opening institutes being operational across public universities in different parts of the East African country.

The Confucius Institute at the AAU, which started operation in Ethiopia in 2012, has so far registered over 10,000 students who passed through various levels of Chinese language studies at different facilities across the country, according to figures from the institute.

Among them, close to 100 were able to get their bachelor's degrees in Chinese language, most of whom had the experience to study in China and now actively engaging in facilitating the ever-expanding Sino-Ethiopian relations.

Chinese professors have also won the hearts and minds of local youths for their efforts to improve their future prospects, and serve as the connecting bridge between the two cultures.

He Yang, who is also a professor of English language from China's Henan University of Chinese Medicine, presently serving as a voluntary lecturer at the Confucius Institute, is one of the Chinese professors who have received acclaim for their dedication.

"Language is a very important bridge between the two countries. Language is, I think, very, very important for Chinese and Ethiopian young students. So, the Confucius Institute is very great in this," He asserted.

During the lecture, He taught students about Chinese culture, including the Chinese zodiac classification scheme and the lunar calendar that assigns an animal and its reputed attributes to each year in a 12-year cycle, which turned out to be appealing young Ethiopian students who are keen to learn Chinese culture and knowledge.

"The Chinese teachers here are very good, very hard working. Part of their culture is also being on time. They are more engaging with hardworking students in class," Ismael said.

It aspires to enable students to acquire communication skills in Chinese and use the skills in cross cultural communication, and pursue careers in Chinese so as to strengthen the ties between Ethiopia and China, according to the AAU.

Gao Lili, director of the Confucius Institute at the AAU, also emphasized the institute's growing role in terms of serving as a bridge between China and Ethiopia, and boosting the people-to-people relations among the two countries through culture.

"Apart from the language program, we also have many different cultural programs including celebration of Chinese festivals, we organize different kinds of cultural lectures, we invite students to go to China for summer visit including some Ethiopian government officials especially from the education sector," the director said.

As the interest to studying Mandarin grows, the institute is now actively offering Chinese language studies across various organizations, which also targets foreign expats who are presently working and residing in Ethiopia, Gao added.