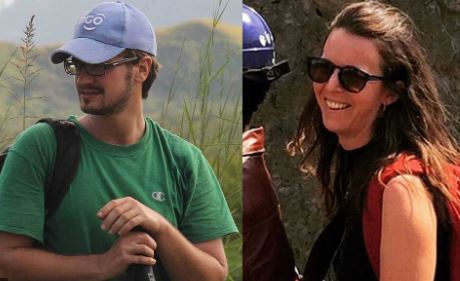 Michael Sharp, of the United States, and Zaida Catalan, of Sweden, working with the UN mission to the DRC in 2017. (Photo: AP)

A Congolese militia leader accused of involvement in the murder of an American citizen and a Swedish national working with the United Nations has been arrested more than three years after their brutal slayings, a prosecutor said Saturday.

Trésor Mputu Kankonde was apprehended in Katole, 15 kilometers (9 miles) north of Kananga late Friday and was being interrogated Saturday by Congolese authorities.

“We have tried many times to arrest him since 2017 but he escaped us,” said Lt. Col. Jean-Blaise Kuzola, the senior military prosecutor in Kasai-Central province.

The bodies of American Michael Sharp, Swedish national Zaida Catalan and a local interpreter, Betu Tshintela, were found in March 2017 after they went missing while investigating human rights abuses in central Congo.

A gruesome video of their slayings, captured on a mobile phone, later emerged, and several dozen people were arrested.

However, rights groups have said state security forces may have been involved, which the government denies.

Among those arrested was a Congolese colonel who had failed to disclose that he had met with the UN experts just two days before their murders.

A total of 36 defendants appeared at the latest court hearing in connection with the case held in August 2019.