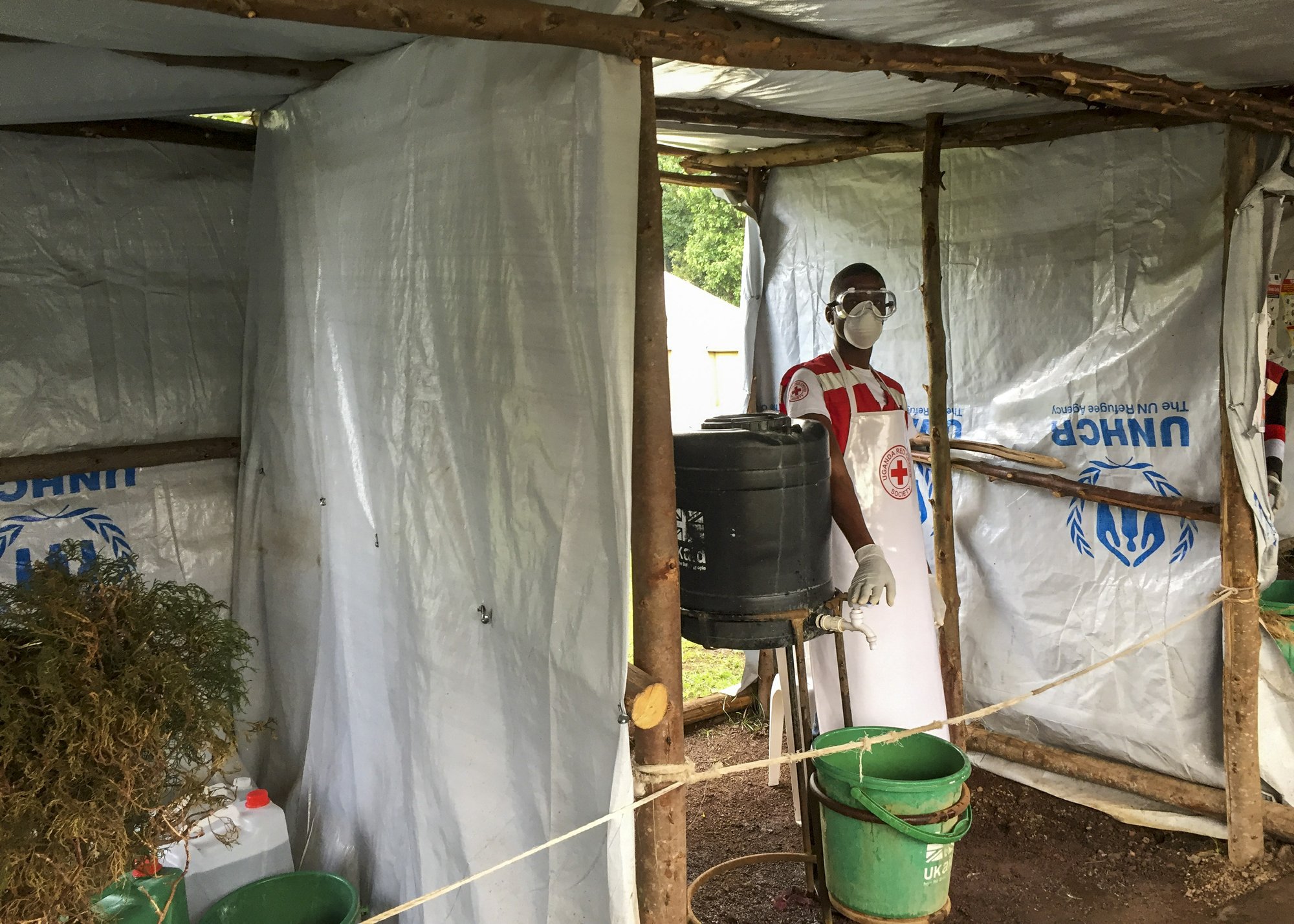 An Ebola screening checkpoint where people crossing from Congo go through foot and hand washing with a chlorine solution and have their temperature taken, at the Bunagana border crossing with Congo, in western Uganda Monday, June 10, 2019. (Photo: AP)

The Congolese pastor who is thought to have caused the Ebola outbreak’s spread into Uganda was unknown to health officials before he died of the disease, the World Health Organization’s emergencies chief said Thursday. That underlines the problems in tracking the virus as a WHO expert panel on Friday discusses whether to declare a global health emergency.

As a third relative of the pastor found infected in Uganda died, Dr. Mike Ryan told The Associated Press he did not believe the man had been on any list of high-risk Ebola contacts that health workers use to track infections and contain the outbreak.

The three family members became infected with Ebola when they traveled from Uganda to Congo to visit him. His 5-year-old grandson became the first Ebola case in Uganda and the first death after several family members quietly returned home on footpaths that bypassed border screening for the disease. The boy’s grandmother and 3-year-old brother have since died, health officials said Thursday.

“It’s an unfortunate occurrence that a pastor who’s taking care of people and providing care to people is himself infected in the line of his own work and then ultimately goes on to infect others,” Ryan said.

The pastor’s positive test for Ebola came back only after he was buried, Dr. Dominique Kabongo, coordinator of Ebola response teams in Kasindi, told the AP. Family members traditionally wash and dress the corpse.

The first cross-border cases in this Ebola outbreak — the second-deadliest in history — have prompted the WHO expert committee to again consider declaring a global health emergency after twice deciding against it. Such declarations almost always boost attention and donor funding.

Ryan said there is no evidence Ebola is spreading within Uganda and that authorities have contained the virus to the family. He said 27 people who may have been exposed are being followed. Ugandan authorities said three suspected Ebola cases not related to the family were awaiting test results.

More than 1,400 people have died in this outbreak declared in August in eastern Congo, one of the world’s most turbulent regions, where rebel attacks and resistance by community members wary of authorities have badly hampered Ebola containment work.

For months, officials have feared the virus would cross the heavily traveled border where health workers have been screening millions of people for fever and other symptoms. Uganda, Rwanda and South Sudan have been preparing for possible cases.

Uganda’s health ministry on Thursday said it no longer had any confirmed Ebola cases after all members of the Congolese-Ugandan family, including the parents and a six-month-old baby, were sent to Congo for monitoring and experimental treatments as part of clinical trials.

There is no licensed treatment for the virus which can spread quickly via close contact with bodily fluids of those infected and can be fatal in up to 90% of cases.

The family’s case shows the challenges in tracking those infected in an outbreak where an alarmingly high percentage of cases aren’t discovered until it is too late. Doctors Without Borders last month said as few as a third of new confirmed Ebola cases were linked back to known contacts of infected people.

Ryan, the WHO’s emergencies chief, told the AP that about 55% of new Ebola cases in Congo last week were previously identified as potential contacts, suggesting significant problems remain. Many people are still dying at home instead of seeking treatment, and their burials put loved ones at risk of infection.

Authorities in Congo and Uganda have vowed to step up border security after several members of the family, already showing symptoms of Ebola, were stopped at a Congolese border post but later slipped away and into Uganda.

Health teams in Uganda “are not panicking,” Henry Mwebesa, the national director of health services, told the AP on Wednesday. He cited the East African nation’s experience battling previous outbreaks of Ebola and other hemorrhagic fevers.

For the first time an experimental but effective Ebola vaccineis being widely used, with more than 132,000 in Congo receiving it. Uganda is more stable than eastern Congo, and it has vaccinated nearly 4,700 health workers. WHO is shipping another 3,500 doses this week for health workers and contacts of those infected.