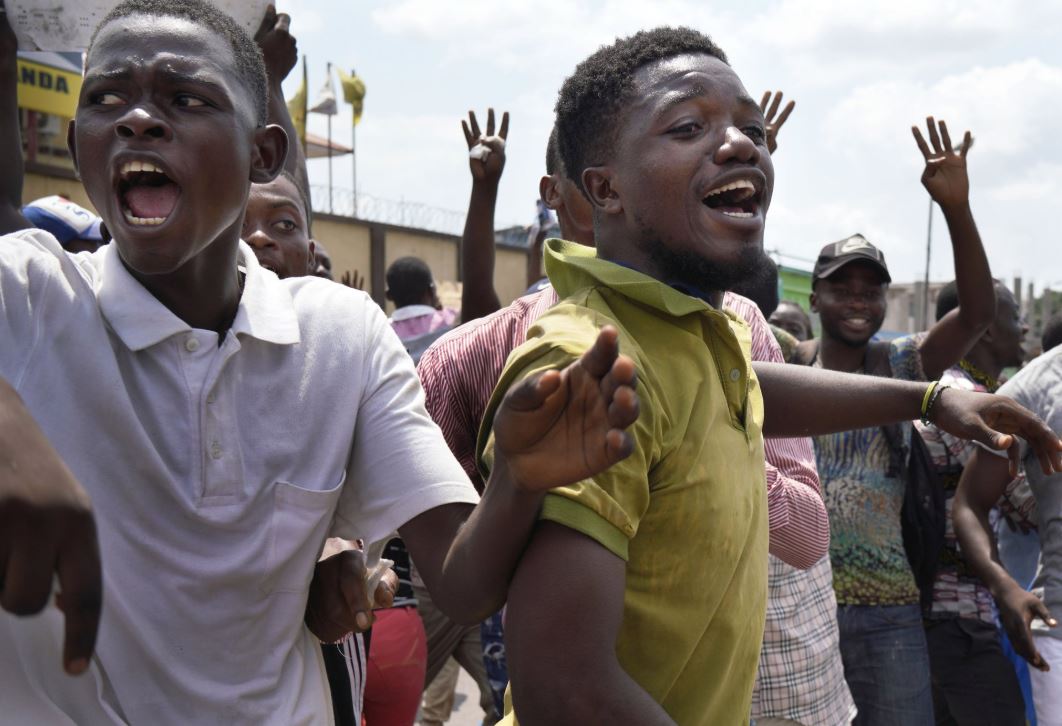 Congo runner-up Martin Fayulu announced on Friday he will file a court challenge to the presidential election results, while his opposition coalition asserted he actually received 61 percent of the vote according to the findings of the influential Catholic Church’s observers.

Fayulu spoke to hundreds of supporters who gathered in the capital, Kinshasa, to denounce what they called “the people’s stolen victory.”

The Catholic Church, the rare authority that many Congolese find trustworthy, has said its 40,000 election observers in all polling stations found a different winner from the official results but it has not given details. Diplomats briefed on the findings say they found Fayulu won easily.

Fayulu urged that Congo’s electoral commission publish detailed results, polling station by polling station, and said he would file his court challenge on Saturday morning. He blew kisses to the crowd.

“Those who have been silly enough to publish false results, we will challenge them,” he said.

Congolese face the extraordinary situation of an election allegedly rigged in favor of the opposition after Kabila’s preferred candidate, Shadary, did poorly in the polls.

The electoral commission early Thursday announced that Tshisekedi had won with 38 percent of the vote while Fayulu received 34 percent.

“Change cannot be negotiated behind closed doors and power only comes from the ballot, there is no other way,” said Fayulu supporter Jean Otaba, 28. “You can see there is no massive celebration despite the announcement. That’s because it is not the truth.”

This could be Congo’s first peaceful, democratic transfer of power since independence in 1960, but observers have warned that a court challenge could spin the long-troubled country into chaos. Some Fayulu supporters have worried that the constitutional court could invalidate the results, keeping Kabila in power until a new election.

There are two options, electoral commission president Corneille Nangaa told the UN Security Council on Friday: The official results are accepted or the vote is annulled.

Congo’s 80 million people have been largely calm, though police said three people were killed in Kikwit city on Thursday as people protested the results. Some students protested in the city of Mbandaka on Friday.

Internet service in Congo, cut off the day after the Dec. 30 vote, has not yet been restored.

Careful statements by the international community, including African regional blocs, have not congratulated Tshisekedi, merely taking note of official results and urging peace and stability in a country with little of it. The foreign ministers of France, Belgium and Britain raised concerns. The United States said “we await clarification of questions which have been raised regarding the electoral count.”

Some observers wondered whether the international community would be content with any change of power after pressuring Kabila over two years of election delays.

“Imperfect elections which guarantee post-election stability are getting more accepted than credible elections that result in refusal of power transfer and conflict!” Arnold Tsunga, Africa director with the International Commission of Jurists rights group, mused on Twitter.

Tshisekedi had not been widely considered the leading candidate. Long in the shadow of his father, the late opposition leader Etienne Tshisekedi, he startled Congo last year by breaking away from the opposition’s unity candidate, Fayulu, to stand on his own.

Fayulu, a former Exxon manager and Kinshasa lawmaker, was a vocal activist during the turbulent delay in Congo’s election, insisting it was time for Kabila to go as many feared the president would find a way to stay in office and protect his vast assets obtained from Congo’s staggering mineral wealth.

Fayulu was backed by two popular opposition leaders barred by the government from running.

The difference between Tshisekedi and Fayulu in official results was some 684,000 votes. Some observers said the 1 million voters who were barred at the last minute, with the electoral commission blaming a deadly Ebola virus outbreak, could have made the difference. Elsewhere, election observers reported numerous problems including malfunctioning voting machines and polling stations that opened hours late.

Several Congo analysts said it appeared Kabila made a quiet agreement with Tshisekedi, saying Fayulu would have posed more of a threat to his interests and allies and that Tshisekedi was more malleable. Tshisekedi took over as head of Congo’s most prominent opposition party only in early 2018, a year after his father’s death.

After results were announced, Tshisekedi said Kabila would be an “important partner” in the power transition.

“Felix Tshisekedi has been compromised,” said Tamuzi Mandar, a local official with Fayulu’s Lamuka coalition. “What is finally revealed is that he is not opposition. His father was, but not him.”

“Felix betrayed the people by licking Kabila’s plate,” said Joel Ituka Kuzembe, 25, who said he spent nine months in prison for participating in the protests that demanded that Kabila step down.

Kabila has ruled since 2001 in the Central African nation rich in the minerals key to smartphones around the world. He is barred from serving three consecutive terms but has hinted that he could run again in 2023.

“There is a lot of sadness in the country,” said Bob Vonda, 35, a lawyer. “You can see people are not celebrating, apart from a very small part. People feel they have been robbed.”