WORLD Congress to vote on legislation to end family separations

Congress to vote on legislation to end family separations 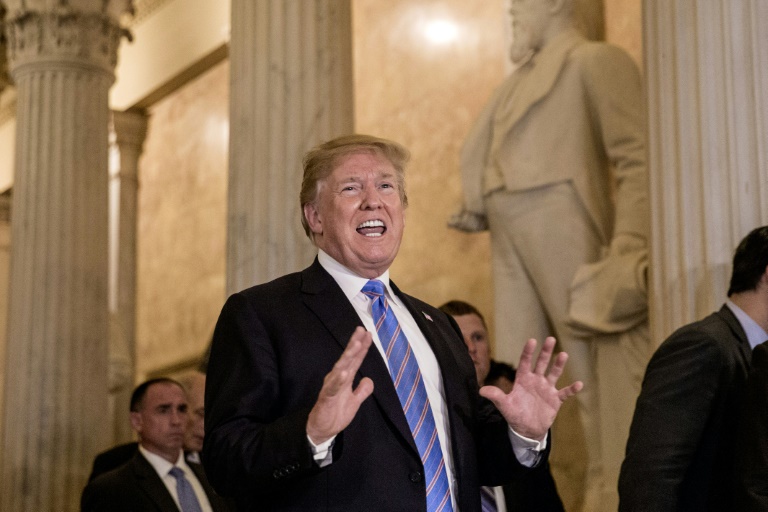 Under seige: President Donald Trump after a meeting with Republicans in Congress late Tuesday over immigration policy (Photo: AFP)

The US Congress will vote Thursday on immigration legislation that will stop the separation of migrant children from their families as domestic and global outrage mounted over President Donald Trump's refusal to halt the practice.

House Speaker Paul Ryan said Wednesday that freshly crafted legislation will resolve multiple issues in dealing with the high flow of illegal immigrants and asylum seekers, which has led to more than 2,300 children being taken from parents since May 5.

Under the legislation, Ryan said, "We are going to take action to keep families together while we enforce our immigration laws."

The proposed legislation emerged from talks Tuesday evening between Trump and Republican leaders, amid intensifying pressure domestically and globally over the harsh border policy.

As countries marked World Refugee Day Wednesday, British Prime Minister Theresa May said images of migrant children kept in cage-like units were "deeply disturbing," and the Council of Europe said Trump had abdicated any claim to moral leadership in the world.

"What is happening at the border where he (Trump) is separating children from their parents is a sign that he is no longer the moral leader of his country or the world," said the council's secretary general, Thorbjorn Jagland.

Trump remained defiant even as members of his party rebelled, the top cabinet official in charge of border policy was driven out of a Washington restaurant by protestors, and the president's own wife and daughter appeared to take issue with the separations.

He blamed opposition Democrats and the media for the crisis on the southern US border and branded the migrants, who say they are fleeing violence in their countries, as a major source of crime.

"The Fake News is not mentioning the safety and security of our Country when talking about illegal immigration," he said via Twitter.

"Our immigration laws are the weakest and worst anywhere in the world, and the Dems will do anything not to change them & to obstruct-want open borders which means crime!"

Amid a surge of migrants from impoverished Guatemala, El Salvador and Honduras crossing the southwest US border and asking for asylum, in early May the Trump administration announced it would arrest and charge criminally all adults.

Meanwhile any children, including the smallest infants, entering the country with them would be taken away and held separately.

The government has said the families could be reunited eventually after the parents were processed in court. But on Tuesday a top official from the Department of Health and Human Services, charged with caring for more than 2,300 such children taken since May 5, admitted they have no system in place to do so.

The issue has become deeply emotional, amid images of children sobbing as their mothers are taken away by border officials, and accounts of children screaming and crying in the tent camps prepared for them in southern Texas.

MSNBC anchor Rachel Maddow broke down in tears in a live broadcast as she read a new account of the so-called "tender-age shelters" housing the youngest children.

The attacks on Trump's policy have grown more personal than any so far in his administration, with five former first ladies openly criticizing it.

And Tuesday night protestors entered an upscale Mexican restaurant and drove out Homeland Security Secretary Kirstjen Nielsen, who oversees border enforcement, in the middle of her dinner.

A veteran senior Republican strategist, Steve Schmidt, declared he was quitting his party and denounced Trump.

Under "vile" Trump, he said, the party has become "corrupt, indecent and immoral."

"This child separation policy is connected to the worst abuses of humanity in our history.”

Even Trump's family appeared to be turning against him. Trump told lawmakers Tuesday that his daughter and policy advisor Ivanka Trump urged him to end family separations on the US-Mexico, according to media reports.

Trump said his daughter asked: "Daddy, what are we doing about this?" according to the New York Times.

And in a tweet on Tuesday after the White House hosted a visit by the King and Queen of Spain, the First Lady Melania Trump wrote: "Queen Letizia & I enjoyed tea & time together focusing on the ways we can positively impact children."