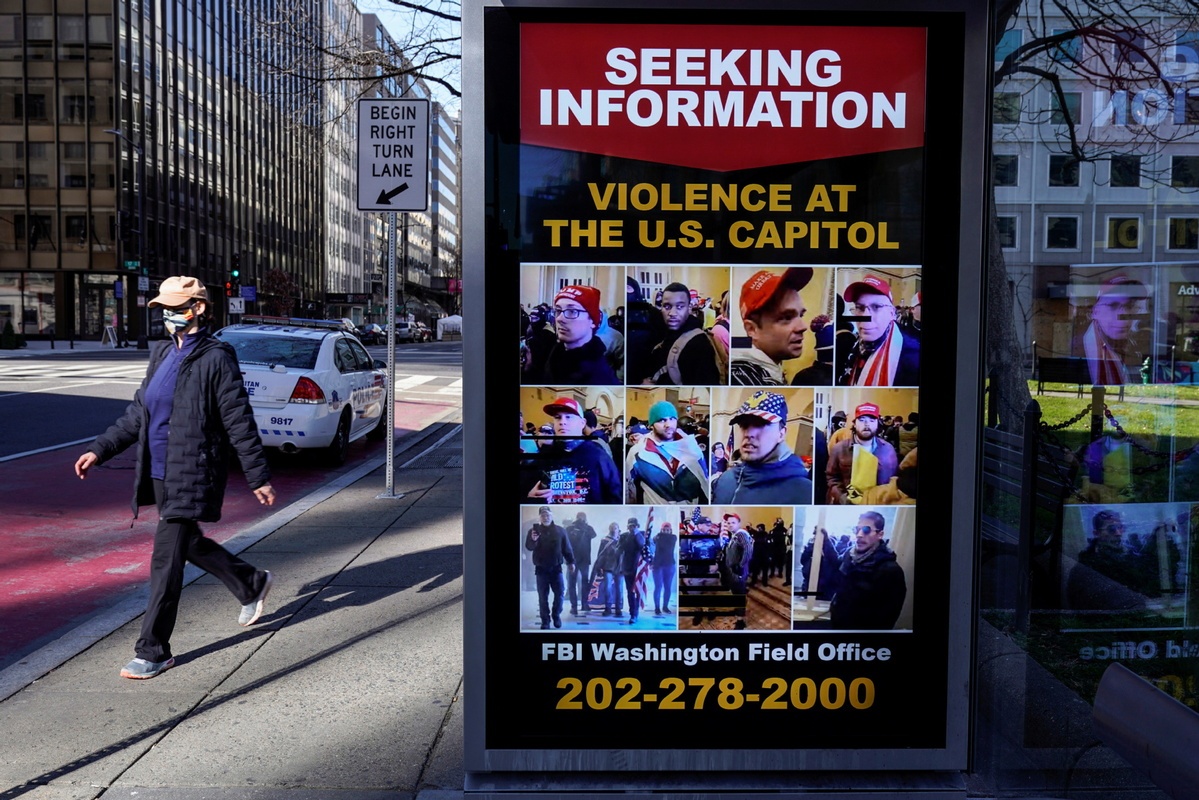 A woman on Sunday walks past a sign at a bus stop from the FBI seeking information of those who stormed the US Capitol in Washington last week. (Photo: Agencies)

WASHINGTON－The conservative social network Parler was forced offline on Monday, tracking websites showed, after Amazon warned the company would lose access to its servers for its failure to properly police violent content.

The site's popularity soared in recent weeks, becoming the No 1 download from Apple's App Store after the much larger Twitter banned US President Donald Trump from its platform for his role over a riot at the US Capitol last week. The harrowing assault on the building left five dead.

Messages of support for Wednesday's attack in Washington－along with calls for more demonstrations－had flourished on the platform, leading Google to remove it from its app store on Friday, followed by Apple on Saturday.

Amazon then confirmed it would suspend the platform from its cloud hosting services for allowing "threats of violence".

Tracking website Down For Everyone Or Just Me showed Parler offline from just after midnight, suggesting its owners had not been able to find a new hosting partner.

In a series of posts on Parler before the site went down, CEO John Matze accused the tech giants of a "war on free speech".

In its early days, the platform attracted a crowd of ultraconservative and even extreme-right users.

But it now attracts many more traditional Republican voices.

Trump is not known to have a Parler profile.

Parler's recent growth was supercharged after last week's violence in Washington as new users, furious over Twitter's ban on Trump, flocked to the app.

In one now-deleted post, an account purporting to belong to Lin Wood, a pro-Trump lawyer, called for Vice-President Mike Pence to be put in front of a firing squad－threats which US media have reported led to a secret service investigation.

A new ABC News/Ipsos poll released on Sunday found that 56 percent of US respondents believe that Trump should be removed from office before his term ends. And two-thirds of them said Trump deserves a "good amount" or a "great deal" of blame for the rioting last week.

Supporters of Trump expressed outrage at the news of Parler being taken down.

Ahead of the shutdown, the US president's son, Donald Trump Jr, complained that "big tech has totally eliminated the notion of free speech in America".

Prominent pro-Trump commentator and conspiracy theorist Mark Dice took to Twitter to urge followers to register on secure messaging app Telegram and Gab, another site popular with the far-right.

With tech giants making their opposition clear, conservative sites such as Parler are likely going to have to find ways to adjust.

Trump may also launch his own platform. But that won't happen overnight, and free speech experts anticipate growing pressure on all social media platforms to curb incendiary speech as the US public take stock of Wednesday's violent takeover of the US Capitol by a Trump-incited mob.

While initially arguing their need to be neutral on speech, Twitter and Facebook gradually yielded to public pressure drawing the line especially when the so-called Plandemic video emerged early in the coronavirus pandemic urging people not to wear masks, noted civic media professor Ethan Zuckerman of the University of Massachusetts-Amherst.

Zuckerman expects the Trump de-platforming may spur important online shifts. First, there may be an accelerated splintering of the social media world along ideological lines.

"Trump will pull a lot of audience wherever he goes," he said. That could mean more platforms with smaller, more ideologically isolated audiences.