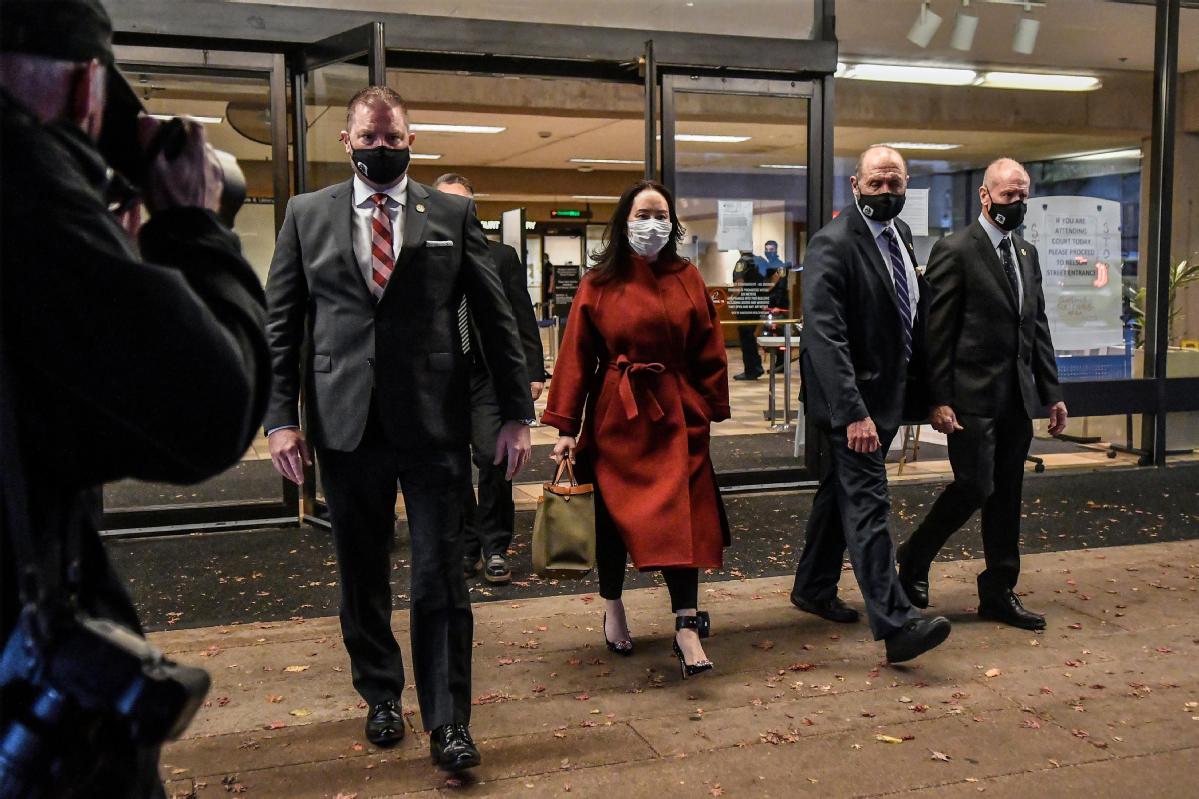 Lawyers for Huawei executive Meng Wanzhou have asserted in a Canadian court that Canadian and US police conspired on her arrest in Vancouver in 2018.

Meng, 48, chief financial officer of the Chinese technology giant, has been fighting extradition to the United States, where she faces fraud and conspiracy charges related to alleged violations by Huawei of US sanctions on Iran. Huawei and Meng have denied such claims.

Meng's lawyers made the claim over the police conspiracy when they returned to the British Columbia Supreme Court in Vancouver on Monday to continue the fight against Meng's extradition to the US. Meng also was in court.

A scheduled 10-day evidentiary hearing, featuring witness testimony, is seeing the cross-examination of officers from the Royal Canadian Mounted Police, or RCMP, and Canada Border Services Agency, or CBSA, who were involved in her arrest. Meng's lawyers are trying to prove that Canadian and US authorities conspired to create a covert criminal investigation against her.

Meng's lawyers contend that Canada violated her rights when she was detained at Vancouver's airport, then searched and interrogated for hours. Defense lawyer Mona Duckett said the CBSA had no evidence implicating Meng as a national security threat－something that the CBSA cited as a reason for intercepting Meng when she landed at the airport.

A witness, Sanjit Dhillon, who was an acting superintendent with the CBSA when Meng was detained for three hours before being arrested by the RCMP, rebutted the assertion in his opening testimony, saying Wikipedia was the source of security questions concerning Meng.

Anticipating her arrival, Dhillon testified that he had found a Wikipedia page about Huawei that said the Chinese telecom company doesn't operate in the US because of security concerns and that Huawei was suspected of violating US economic sanctions against Iran, according to The Canadian Press.

On Tuesday, Dhillon said Meng was not legally "detained" by border officers in December 2018.They were simply "examining her", which does not provide the right to a lawyer or consular access.

Dhillon also denied that he acted on instructions from the FBI. He said he was copied on an email from the US agency asking Canadian authorities to gather information on Meng, but he could not recall the precise content of the request.

On Monday, defense lawyer Duckett accused another border official, Bryce McRae, of giving testimony that is "an entire fabrication" by intentionally not taking notes of the arrest process so that no evidence could be gathered if an investigation were to occur.

Duckett also questioned McRae on whether Meng had active permanent resident status in Canada－despite her attempt to relinquish that status 18 years ago. If Meng had been identified as a permanent resident, it might have influenced whether that examination should have proceeded.

On Monday, Meng's lawyer said that a key witness－since-retired officer Ben Chang, who other officers have indicated passed Meng's digital information to the FBI－has refused to testify.

"There may be a number of consequences from his refusal to testify," defense attorney Richard Peck said in court, adding that Chang's absence was concerning.

Chang has denied he shared the data with the FBI, and the email in question was permanently deleted upon his retirement.

Hearings in October found that another RCMP officer, Winston Yep, admitted he may have signed off on the request for an arrest warrant filed with a judge without closely examining the details of the allegations against Meng on the day of the arrest.