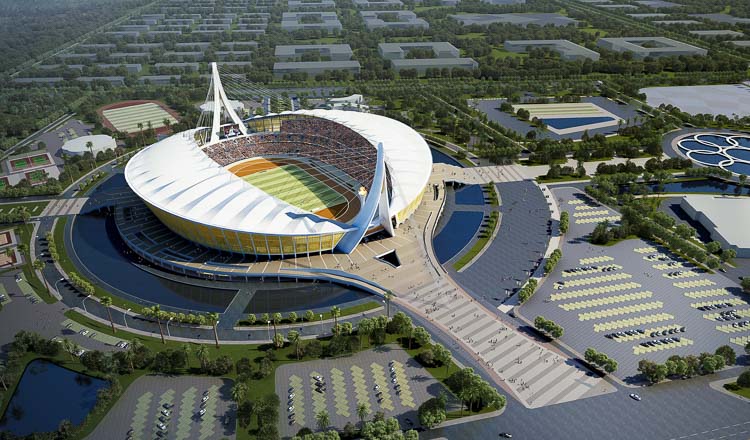 PHNOM PENH, Aug. 17 (Xinhua) -- Construction work on a China-funded national stadium in Phnom Penh, capital of Cambodia, had been completed despite the impact of COVID-19, Minister of Tourism Thong Khon said on Tuesday.

Khon, who is also the president of the National Olympic Committee of Cambodia, said the 60,000-seat stadium will serve as the main venue for tournaments when Cambodia hosts the Southeast Asian (SEA) Games in 2023.

"The stadium is a great achievement in Cambodia's sports sector, and it is a new symbol of the unbreakable iron-clad friendship between Cambodia and China," he told Xinhua.

"It will not only support the development of the sports sector but also serve as a magnet to attract tourists, especially the Chinese, to Cambodia in the post-COVID-19 pandemic era," he added.

Developed by the China State Construction Engineering Corporation (CSCEC) under China's grant aid, the construction work on the project started in August 2017. The stadium was built in the shape of a "sailing ship" in which its both prows are 99 meters tall, and it was encircled by an ancient Angkor-style moat.

Khon said the stadium had also been equipped with hotels, sportswear shops, equipment shops, and other facilities.