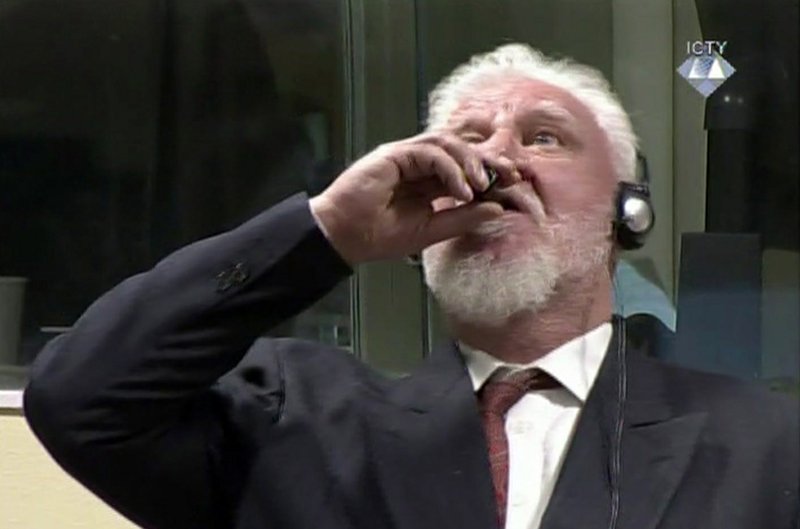 A deadly chemical was in the container from which a Croat war criminal drank shortly before dying, a Dutch prosecutor said Thursday, as an independent investigation into the dramatic death of Slobodan Praljak moved forward.

Praljak, 72, stunned the International Criminal Tribunal for the former Yugoslavia on Wednesday when he gulped down liquid from a small bottle seconds after a U.N. appeals judge confirmed a 20-year sentence against him.

The wartime commander of Bosnian Croat forces said in court that he had taken poison. He was rushed to a Hague hospital but died there, tribunal spokesman Nenad Golcevski said.

Praljak’s lawyer, Nika Pinter, said Thursday that she never expected him to kill himself and does know how he obtained the fatal liquid given the court’s strict security.

Pinter described Praljak to Croatia’s Hina news agency as “an honorable man who could not live with the war crimes conviction and leave that courtroom handcuffed.”

Praljak was originally convicted in 2013 of crimes including murder, persecution and deportation for his role in a plan to carve out a Bosnian Croat ministate in Bosnia in the early 1990s.

Fikenscher said that an autopsy, including toxicological tests, will be carried out soon on Praljak’s body.

Croatian Prime Minister Andrej Plenkovic said Thursday that Praljak wanted to send a message to the U.N. court that the verdict against him was unjust. Plenkovic said the former general was “obviously shaken by the possibility he would be convicted” of war crimes for his actions during Bosnia’s 1992-95 war.

Fikenscher said the Dutch investigation will look into how Praljak managed to take the small bottle of poison into the tribunal’s tightly guarded courtroom.

Golcevski on Thursday declined to comment on the security situation at the court or its detention center, saying that, “there is an independent investigation ongoing and ... these are issues that will likely be addressed by that investigation.” He also would not give details of who had visited Praljak in the days and weeks before Wednesday’s events, citing privacy considerations.

A lawyer who has frequently defended suspects at the war crimes court told the AP that it would be easy to bring poison into the court.

Prominent Serbian lawyer Toma Fila said security for lawyers and other court staff “is just like at an airport.” Security officers inspect metal objects and confiscate cellphones, but “pills and small quantities of liquids” would not be registered, Fila said Wednesday.

Praljak was a Bosnian Croat writer and film and theater director turned wartime general. His indictment said he also worked as a professor of philosophy and sociology.

He was among six Croats whose prison sentences ranging from 10-25 years were confirmed by appeals judges on Wednesday. The five-judge U.N. panel overturned parts of their convictions but upheld the majority and agreed with trial judges who ruled that the crimes were part of a “joint criminal enterprise” with links to late Croatian President Franjo Tudjman and other top Croat officials.